By now, you’ve hopefully heard about the recent discovery of gravitational waves from LIGO. (If not, you can read all about it here!) In addition to great comics, this exciting detection has lead to a flurry of follow up observational and theoretical papers. Many of these papers will eventually go through the process of peer review and publication, but scientists are like Veruca Salt — they want to talk about it now. To speed up the process of scientific dialog, scientists post their (unpublished) papers onto the arXiv, an online database of research articles. Just one week after the initial announcement, there are over 30 papers on the arXiv about the LIGO gravitational wave event!

These papers are addressing the plethora of open questions following the LIGO announcement: Did any unexpected physics pop out of the original signal? How common are black hole – black hole mergers? Was there an electromagnetic companion to the gravitational waves? Today, we’ll look at just one of the many papers which tackles this last question.

Specifically, the authors of today’s paper try to explain a very odd gamma-ray burst, or a flash of gamma rays, which roughly occurred in the same patch of sky as the gravitational wave detection. Fermi, a gamma-ray space telescope which continuously monitors the whole sky, detected a gamma-ray burst half a second after the LIGO detection. Whether or not this detection was astrophysical or a bump in the telescope is still up for debate, but Rosalba Perna and her collaborators work under the assumption that this was a real detection.

In today’s paper, the authors argue that a disk actually can survive around a black hole! This possibility was explored in a previous paper by the same group of scientists who were interested in planet formation around black holes. They find that the disk can avoid being gobbled up by the black hole so long as it remains at a low temperature (lower than the ionization temperature of hydrogen). 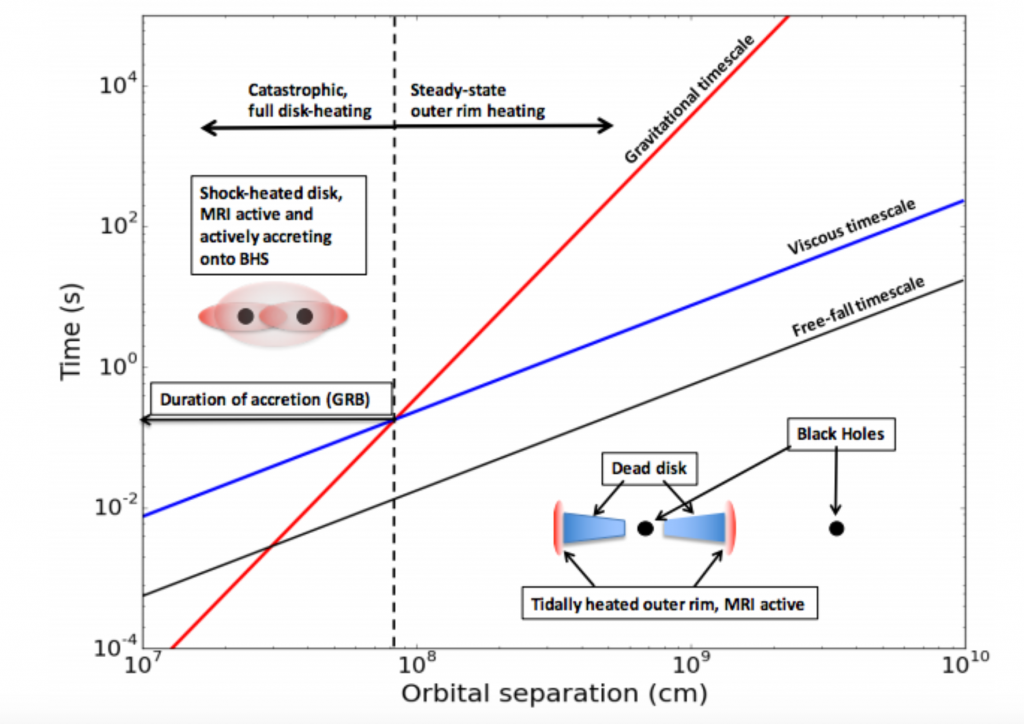 If just a single disk remains around one of the two black holes in the pair, the destruction of the disk as the two black holes merge can create a short gamma ray burst. A schematic of this proposed scenario is shown above. From their simple assumptions, they estimate that the gamma ray burst should last for about one fifth of a second — a bit shorter than the one second burst actually detected. Looking forward, we can probably expect many more of these types of theories and explanations behind the exotic objects detected with LIGO!