Delphic Dwarfs and the Nature of Dark Matter

The Milky Way does not keep a solitary sentinel over our corner of the universe. Our home galaxy is surrounded by a large family of small siblings, its dwarf galaxy satellites. Dwarf galaxies are a unique lot; they have substantially smaller masses than the Milky Way, ranging anywhere from hundreds to hundreds of thousands of times smaller, and can be incredibly faint, which makes them a challenge to find (for more on how this is done for an extragalactic dwarf, see Elisa’s bite). The faintest dwarfs (the Ursa Major II Dwarf, for instance), inhabited by as few as hundreds or thousands of stars, are only a few thousands of times more luminous than the Sun, making them fainter than some the most luminous massive stars we’ve observed. What they lack in mass and luminosity, however, they make up for in number. Dwarfs are the most common type of galaxy that you can find; the Milky Way alone has over 20 dwarfs, and our sister galaxy, Andromeda, has over 30. Their relative faintness, given their mass, imply that a large fraction of their mass is dark matter—in fact, they are believed to be the galaxies with the highest dark to baryonic mass ratio in the universe (often over 90%!). This makes them the cleanest laboratories for testing our understanding of dark matter physics. 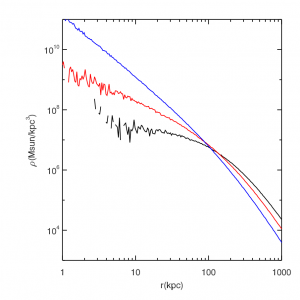 Figure 1. Core vs. cusp. Dark matter-only simulations predict that the central densities of dark matter halo are peaked, or “cuspy.” Such a profile is shown here in blue. Observations of dwarf galaxy indicate that they live in halos with a flatter central density profile, or are “cored,” shown here in red and black.

In fact, dwarf galaxies motivated one crucial outstanding problem with our standard picture of dark matter, or cold dark matter (CDM): the so-called “core-cusp” problem.  CDM is described as “cold” because CDM particles were non-relativistic when they formed in the early universe; CDM is also collisionless, interacting with fellow dark matter particles through only the long-range gravitational force. Dark matter-only simulations of the universe predict that the dark matter halos in which galaxies are found should exhibit a peak or “cusp” in their central densities. Observations of nearby dwarfs, however, have instead revealed flat central cores (see Figure 1). One promising method of producing cored dwarfs questions the assumption that CDM is collisionless: if dark matter particles could interact with other not just through gravity but also through a short-range force, i.e. were “self-interacting,” the resultant collisions would allow particles to exchange kinetic energy and angular momentum and thereby smooth out central peaks. Limits on the strength of these self-interactions are can be derived by measuring the sizes of dwarf cores, as stronger self-interactions produce more frequent collisions and thus larger cores. 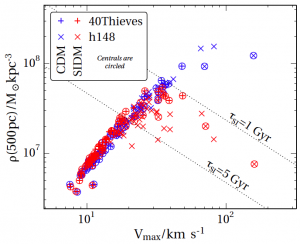 Figure 2.  Similarity of CDM (blue) and SIDM (red) central densities in DM-only simulations of low-mass dwarf galaxies.  Vmax is a proxy for halo mass.  Dwarfs with Vmax < ~30 km/s (corresponding to masses < 1010 M☉) have similar core densities, regardless of whether the dark matter is self-interacting.  More massive SIDM galaxies form a lower density core as can be seen by the offset of the red points from the blue points at Vmax > ~30 km/s.

However, it appears that there may be some caveats that could limit the usefulness of using low-mass dwarfs as a test for self-interacting dark matter (SIDM). The authors of today’s paper investigated two in particular. They first considered whether the central densities of low-mass dwarfs were so low that dark matter self-interactions would not occur frequently enough to produce cores despite assuming strong self-interactions. To test this, the authors turned to N-body simulations of dwarfs, which they ran with high mass resolutions in order to accurately resolve the low-mass dwarfs. To maximize the effects of dark matter collisionality, they assumed relatively strong self-interactions, which is typically quantified by the self-interaction cross section σSI/mΧ, where mΧ is the (unknown) mass of the dark matter particle. Observations of merging clusters of galaxies limit the cross section to be about 0.1 – 1 cm2 g-1; the authors adopted a cross section at the upper end of this range, 2 cm2 g-1. They found that SIDM galaxies with masses less than 1010 M☉ did not exhibit cores (see Figure 2) and that this was indeed due to the lower dark matter densities at the centers of these galaxies.

The second caveat to using dwarfs as probes of SIDM lies in the fact that the matter in our universe, of course, is not all dark. In these dark matter-dominated dwarfs, baryons can contribute as little as a few to a few tens of percent of the total mass. However, the authors found that including the baryons when modeling dwarfs of order 1010 M☉ could produce observed dwarf core sizes and central densities as well as observed stellar and gas distributions. In addition, it appears that when baryons are included, SIDM and CDM halos are nearly indistinguishable.

Thus low-mass dwarfs may not be particularly sensitive probes of DM physics after all, and their cores may find a natural explanation in baryons. What does this mean for SIDM? Is it destined to led to the back door, shoved out and discarded among the remnants of other once-promising but ultimately unsuccessful cosmological theories? It’s unclear. There are many uncertainties inherent in this sort of study: was the correct self-interaction cross section used?  Is our understanding of how baryonic physics affects dark matter structure accurate?  Other simulators have also modeled SIDM dwarfs with baryonic physics and found differences in the cores sizes of SIDM and CDM halos; this may be due to the smoother star formation histories (as opposed to the many quick short bursts the authors of this paper saw in their sims) that their prescription for the baryonic physics produced. The authors argue that the observed outflows and stellar populations of dwarfs agree with the more bursty star formation produced in their models.  There’s a lot more work to be done before we can make any definitive conclusions about SIDM.

If ultimately, baryonic physics can produce substantial cores in dwarfs and that realistic SIDM and CDM halos with baryons look identical, then some other exciting new doors are opened. If strong self-interactions can reproduce the observed properties of dwarfs when baryons are included, could the self-interactions be even stronger than we dared imagined?  It’s also possible that SIDM could return, reincarnated, but with a velocity-dependence that produces weak self-interactions in massive systems (as required by observations of galaxy clusters), but strong self-interactions in dwarfs. To explore these possibilities, we shall have to wait for new observations of ever fainter dwarfs and further numerical work on SIDM.

Flying Free: A Supermassive Black Hole Kicked Out Of Its Galaxy