Short gamma ray bursts are rapidly flickering flashes of energetic photons (gamma rays) lasting about a second. The total energy released in photons by one of these creatures (1049 erg) is only a little less than that of a supernova (1051erg), and supernovas last weeks! Often short gamma ray bursts are followed by steady afterglows of lower-energy photons (x-rays) lasting up to a few hours. There’s a good working model for what’s causing them: extremely rapid black hole accretion powering a jet. But the standard model’s got a problem: it can’t explain the x-ray afterglows. The authors of today’s paper present a solution to the x-ray problem. Since their work builds on the standard model let’s start there. 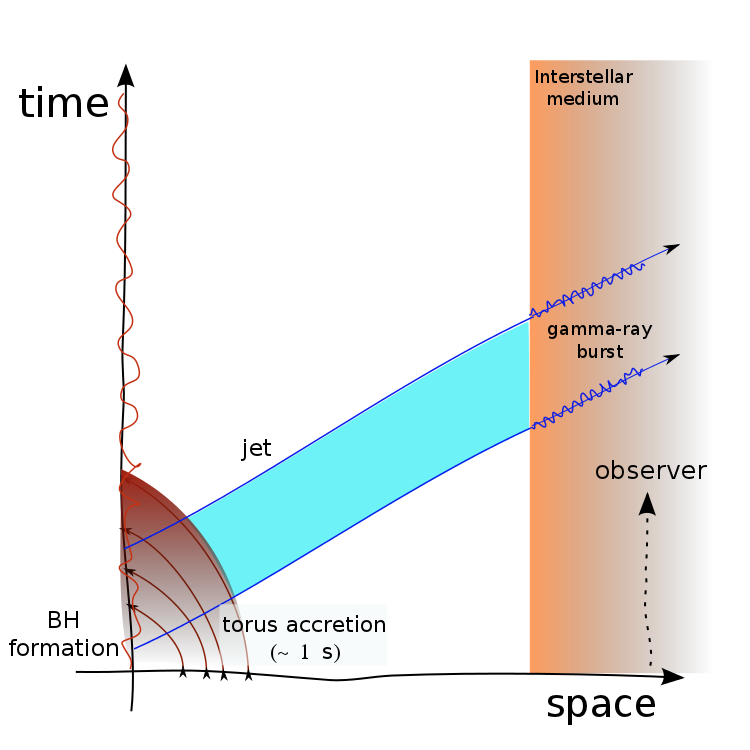 Figure 1: the standard model for a short gamma ray burst. 1) Two neutron stars merge (not in the diagram), 2) the super heavy neutron star collapses to a black hole (lower left corner), 3) the black hole (red squiggly along the time axis) accretes the remaining matter (maroon wedge in the lower left corner), 4) a jet is launched (cyan diagonal swath), 5) gamma rays are emitted when the jet slams into the interstellar medium. (Figure from me.)

The engine of the standard model is a black hole accreting a lot of matter very, very fast: about a solar mass in one second. This sounds crazy, but black hole accretion is very efficient at liberating mass energy; it’s a good way to get 1049erg out of a stellar mass system over 1 second. This rapid accretion launches a jet of matter at more than 0.999 times the speed of light. Okay, that sounds crazy too, but these extremely relativistic speeds are needed to explain the rapid flickering of the gamma rays. Far away from the central engine, the jet slams into some dense gas, maybe the interstellar medium. This shock produces the gamma rays we see from Earth.

I’ve drawn a spacetime diagram of the model in Fig 1. Recall, objects moving a lot slower than light (like the observer on the far right of the diagram) trace vertical paths in spacetime diagrams; light rays trace diagonal paths. 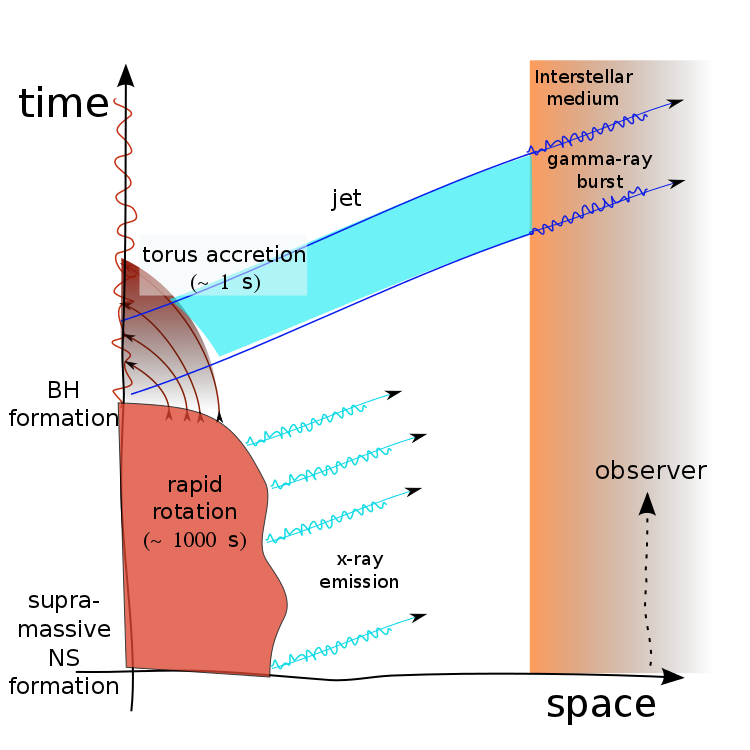 Figure 2: the standard model for a short gamma ray burst, including a supramassive neutron star remnant. 1) Two neutron stars merge (not shown in the diagram), 2) the long-lasting supramassive neutron star (wiggly red blob at the lower left) emits x-rays (cyan diagonal squigglies), 3) when its rotation slows down too much, it collapses to a black hole, 4) the black hole (red squiggly along the time axis) accretes the remaining matter (maroon wedge in the middle of the time axis), 5) a jet is launched (cyan diagonal swath), 6) gamma rays are emitted when the jet slams into the interstellar medium. But in this model, the observer sees the x-rays before the gamma rays! (Figure from me.)

Okay, black hole formation leading to rapid accretion leading to a jet leading to gamma rays. So how do we get x-rays out of this thing? Here’s a promising hint: “really massive neutron stars can’t support their own gravity.” “Can’t” as in “not even for a little while”? Well, actually, if they’re spinning super fast, they can survive a little while. In a neutron star merger, this is exactly what happens. The final orbits of the two stars are extremely fast, and this orbital motion carries over into the rapid spin of the merged remnant. (Here’s a movie from Stephan Rosswog.) This wobbling, throbbing, spinning blob is called a supramasive neutron star, because if it weren’t spinning it would collapse to a black hole.

Furthermore, the churning and mixing of the supramasive neutron star will amplify its magnetic field so that it begins to emit light like a pulsar, only much higher energy: x-ray light, actually. Great! So this is where the x-rays come from.

Not so fast; the timing is wrong! The x-rays we’ve just described would actually precede the burst of gamma rays. Here, I’ve added the supramassive neutron star in Fig 2. The observer doesn’t see any x-rays after gamma rays. And we know this is wrong, we’ve seen lots of x-ray afterglows. 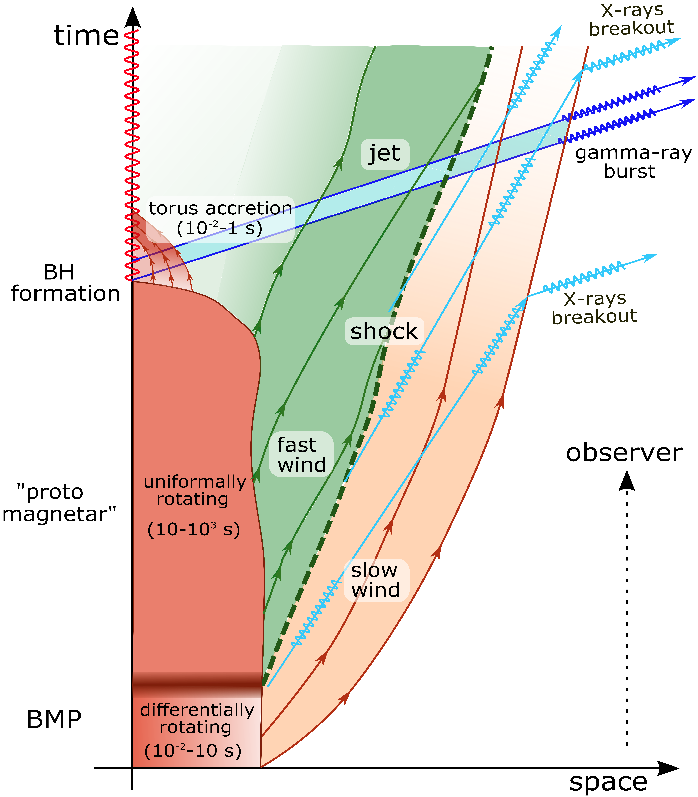 Figure 3: the two-winds model. 1) Two neutron stars merge (not shown in the diagram), 2) the supramassive neutron star (wiggly red blob at the lower left) rotates faster on the inside than on the outside causing it to heat, and it emits a slow, dense wind (light orange wobbly diagonal swath), 3) when it begins to rotate uniformly, the magnetic field built up by the earlier differential rotation drives a fast, diffuse wind (green wobbly diagonal swath), 4) when its rotation slows down too much, it collapses to a black hole, 5) the black hole (red squiggly along the time axis) accretes the remaining matter (maroon wedge toward the top of the time axis), 6) a jet is launched (cyan diagonal swath), 7) gamma rays are emitted when the jet slams into the interstellar medium, 8) x-rays are emitted when they diffuse through the slow wind, or when the shock due to the fast wind breaks through the slow wind. (Figure from Rezzolla and Kumar.)

This brings us to the new model. Rezzolla and Kumar have discovered a simple explanation for x-rays after gamma rays by turning their attention away from the central engine. Their model uses all the same bits and pieces we’ve already examined, but it also introduces faraway winds. Their knowledge of winds is based on computer simulations of supramassive neutron stars.

When the fast wind slams into the shell of slow wind, it shocks and generates x-rays. But the x-rays are trapped. The slow wind is so dense that it’s opaque to x-rays. Just like photons generated in the Sun, the x-rays scatter and diffuse slowly through the slow wind, slower than the speed of light, slower than the shock wave that produces them. Much of the x-ray light reaches the outer surface, where it can stream freely toward Earth after the jet breaks through and forms the gamma ray burst.

In Fig 3, to the right, Rezzolla and Kumar present their model just like our spacetime diagrams above. Notice that in this model, the gamma rays are formed when the jet shocks into the slow wind, not when it shocks into the interstellar medium.

One key observation could strengthen Rezzolla and Kumar’s two winds model: an x-ray precursor to a short gamma ray burst. The spacetime diagram for their model reveals how x-rays could be visible after and before the main burst. In fact, such precursors have already been seen! But don’t get hasty; there are other ways for neutron star mergers to emit x-rays before they merge (for example shattering their crusts).