Theory and experiment in astrophysics – a love story

The classical story on the interplay of theory and experiment in science is straightforward. The theorist rummages around on the black board until he can present a new ‘hypothesis’. An essential (and often neglected) point is that the new idea makes falsifiable predictions. The observer (in astrophysics) then checks if the idea is present in nature and can be distinguished from other effects. If yes, everybody is happy and science once again won a glorious battle! If no, the story starts from the beginning. Unfortunately (speaking as one), theorists sometimes tend to glorify the majesty and complexity of their models and forget to check if these are (still) in line with experiment. People in science tend to think differently about this topic, and the rise of computational methods in the last decades provides new challenges to this centuries-old way of advancing natural sciences.

However, today’s featured paper stands as a role model in that respect and tries to quantify measurable predictions for the chaotic movement of particles, also known as turbulence, in protoplanetary disks (where young planets are formed), which is thought to be the cause of their ‘short’ (in astronomical terms) lifetimes of millions of years.

Ingredients for the recipe

Turbulence in general can originate from different effects. One is the interaction of gas with magnetic field lines (magnetohydrodynamics, ‘MHD’), which are present in the protoplanetary disk. To be able to make predictions for the influence of magnetic effects on the velocity distribution (i.e., the dynamics of the gas as evidence for the turbulent motion) in- and outside of the disk, the authors of this paper run several local MHD simulations by using the Athena code.

Figure 1: Cartoon of the layered structure of a protoplanetary disk, indicated with zones where some MHD effects take place and from where CO line tracers originate. FUV means far ultraviolet and the corresponding zone is where the particles in the disk are ionized by the irradiation from the star. In the ‘ambipolar damping zone’ these ionized particles slow down the non-ionized ones from deeper regions via collisions. The different CO regions correspond to layers where different CO isotope transitions can be observed. (Simon et al., 2015)

‘Local simulations’ means that they do not concentrate on the disk as a whole, but instead on a specific region of it (for an image of such a ‘shearing box’, see the first author’s website). To get a better idea of what’s going on, Figure 1 illustrates the disk structure and the zones where the MHD effects may play a role. Especially important here are the regions labeled with ‘CO’, which is where the turbulence in the disk interacts with the CO molecules in the gas. This is where the interplay of theory and observations joins the stage. 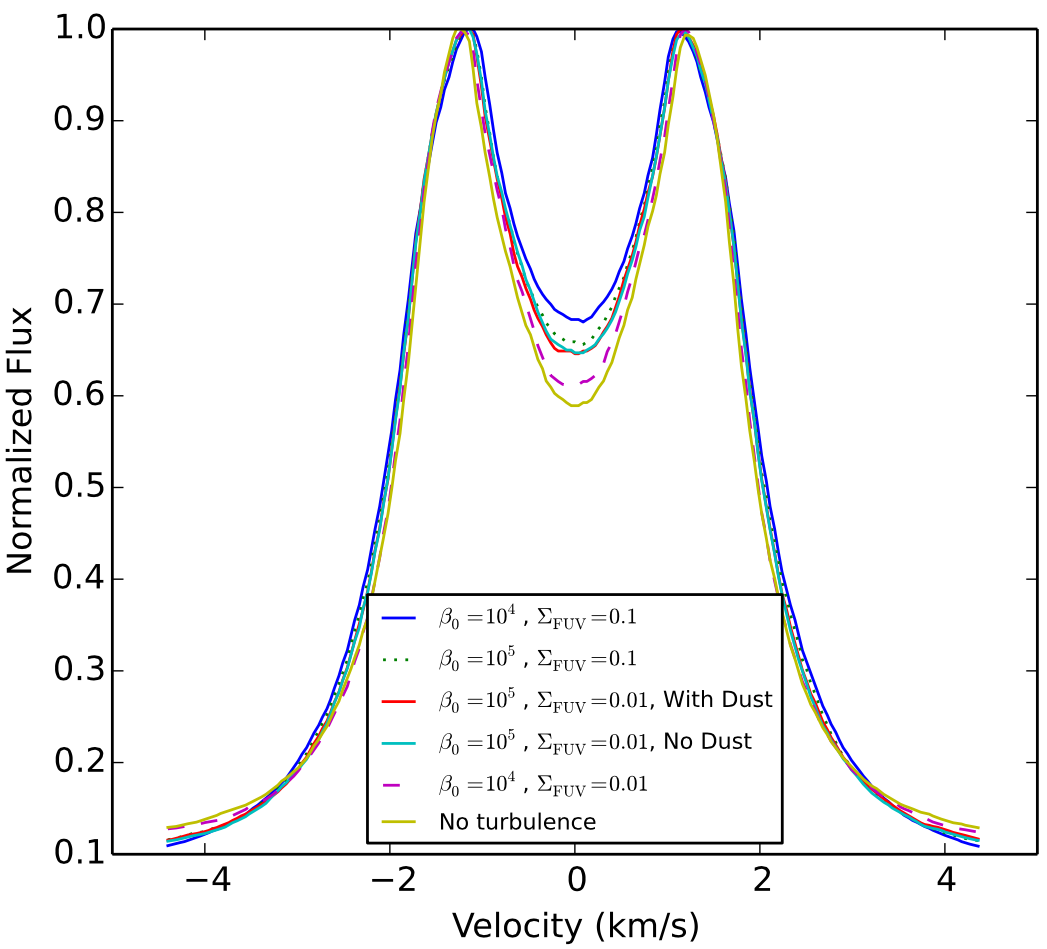 Figure 2: Synthetic observations of the spectra of different disk models of HD 163296, rated by strength of turbulence, which decreases from top to bottom. The flux gives the number of photons we observe from the emission line. Instead showing a single peak, the velocity distribution in the disk (one part of moving towards us, one  away from us) produces a ‘broadened’ spectrum with a dip from the inner parts of the disk. The overall shape of the line is further affected by the stochastic motions of turbulent gas, which to distinguish between models with and without turbulence. (Simon et al., 2015)

The turbulence, caused by the magnetic fields in the disk, bends the dynamics of the gas in such a way that it becomes random in some areas. Therefore, the molecules in the gas show a different motion than without it. This change in velocity (simulated with the MHD code) is then transferred, by making use of the LIME code, into so called mock-up observations of protoplanetary disks. These are simulated observations of what kind of light specific parts of the disk emit and how this looks like through a spectrometer. Molecules in the disk emit light, when one of its electrons in an excited state transitions from a higher to a lower energy level. However, turbulent motion and other effects ‘broaden’ the spectrum we receive from the disk, as you can see in Figure 2. It shows modeled spectra for the protoplanetary disk around the star HD 163296.

essentially tell us the influence of turbulence in the simulation, starting from strong turbulence (top) to zero turbulence (bottom). You see the difference in the model shapes, which can be detected by observing the real spectrum of such a disk.

This is why the CO zones in Figure 1 are important: the emissions from this molecule act as a ‘tracer’ to probe different layers of the disk and allow to quantify the influence of turbulence on the gas in these. However, such line observations need an instrument featuring a sensitivity high enough to detect those tiny variations in the incoming light. The author’s telescope of choice will therefore be the famous Atacama Large Millimeter Array (ALMA), a network of telescopes in the Chilean mountains. Since some time ALMA is in its science phase and can finally be used to take awesome pictures. The plan for the future is now to use the simulated line tracers in this paper to unveil signatures of MHD turbulence in the disk around HD 163296. Thus, we will soon be able to shed some light on a main driving mechanism of accretion disk dispersal.