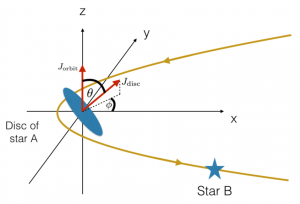 Illustration of the RW Aurigae system containing two stars (dubbed A and B) and a disk around Star A. The schematic labels the angles needed to define the system’s geometry and angular momenta. Fig. 1 from the paper.

Physical models in astronomy are generally as simple as possible. On the one hand, you don’t want to oversimplify reality. On the other hand, you don’t want to throw in more parameters than could ever be constrained from observations. But some cases deviate just enough from a basic textbook case to be really interesting, like the subject of today’s paper: a pair of stars called RW Aurigae that features a long arm of gas and dust wrapped around one star.

You can’t model RW Aurigae as a single star with a disk of material around it, because there is a second star. And you can’t model it as a regular old binary system either, because there are interactions between the stars and the asymmetric circumstellar disk. The authors of today’s paper create a comprehensive smooth particle hydrodynamic model that considers many different observations of RW Aurigae. They consider the system’s shape, size, motion, composition, and geometry, and they conduct simulated observations of the model for comparison with real observations. 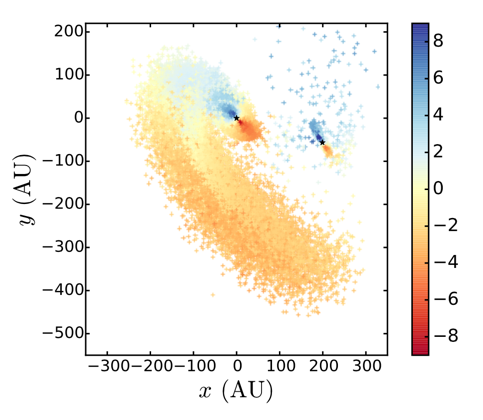 Simulated particles in motion in RW Aurigae. This view of the smooth particle hydrodynamic model has each particle color-coded by its velocity toward or away from the observer (the color bar is in km/s). Star A is the one in front with a large tidally disrupted disk. Fig. 2 from the paper.

The best-fitting model of RW Aurigae matches observations of many different aspects as observed today, including particle motions. Because the model is like a movie you can play backward or forward in time, the authors are able to show that the current long arm of gas most likely came from a tidal disruption. This was long suspected to be the case, based on appearance alone, but this paper’s detailed model shows that the physics checks out with our intuition.

What exactly is a tidal disruption? Well, in this case, over the last 600 years or so (a remarkably short time in astronomy!), star B passed close enough to the disk around star A to tear it apart with gravity. Because some parts of the disk were significantly closer to star B than others, they felt different amounts of gravitational force. As time went on, this changed the orbits of individual particles in the disk and caused the overall shape to change. This is the same effect that creates tides on Earth: opposite sides of the Earth are closer or farther from the Moon’s gravity at different times, which causes Earth’s oceans on the far side from the Moon to feel less force than the water closer to it. The figure above shows present-day motions of simulated particles in RW Aurigae that resulted from the tidal encounter. The figure below shows snapshots from a movie of the hydrodynamic model, from about 600 years in the past to today. Instead of representing motion, the brighter regions represent more particles (higher density). 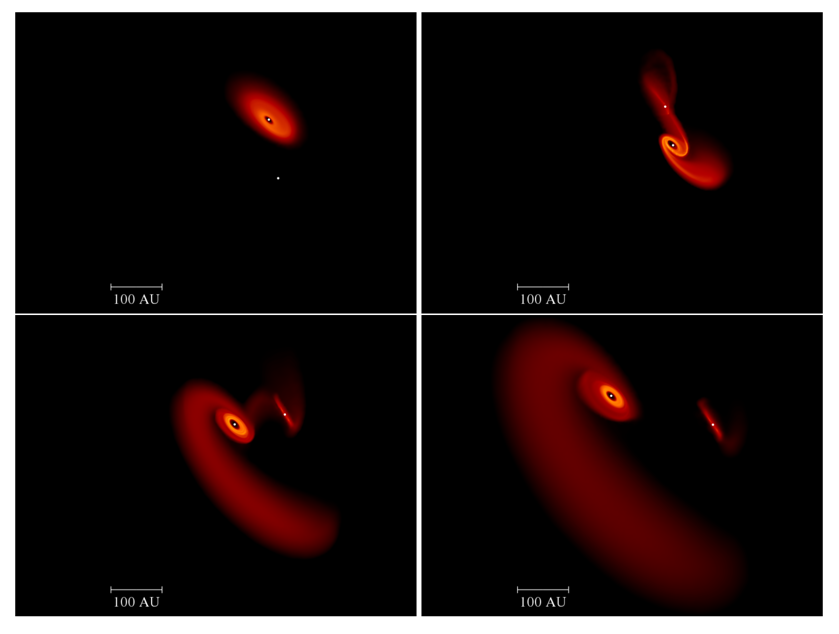 Snapshots of the RW Aurigae model over a 600-year time span as viewed from Earth. From top left to right bottom the times are -589, -398, -207, and 0 years from today, respectively. Brighter colors indicates higher density. There is a stream of material linking stars A and B in the bottom right panel, but it is not visible here due to the density contrast chosen. Fig. 4 from the paper.

Observational astronomers are always constrained to viewing the cosmos from one angle. We don’t get to choose how systems like RW Aurigae are oriented on the sky. But models let us change our viewing angle and better understand the full 3D physical picture. The figure below shows the disk around star A if we could view it from above in the present. As before, brighter areas have more particles. Simulated observations, such as measuring the size of the disk in the figure below, agree well with actual observations of RW Aurigae. 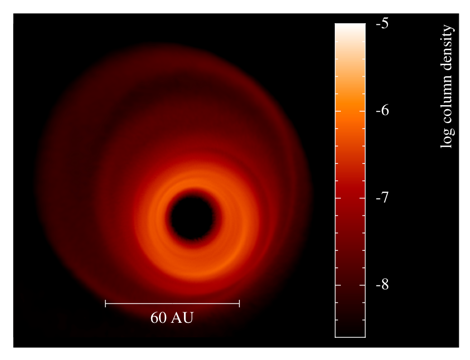 Top-down view of the present-day disk in star A from the RW Aurigae model. The size of the model disk agrees with estimates from observations, and the disk has clearly become eccentric after its tidal encounter with star B. Fig. 9 from the paper.

The final mystery the authors of today’s paper explore is a dimming that happened during observations of RW Aurigae in 2010/2011. The model suggests this dimming was likely caused by the stream of material between stars A and B passing in front of star A from our line of sight. However, since the disk and related material are clumpy and still changing shape, they make no predictions about specific future dimming events. Interestingly, another recent astro-ph paper by Petrov et al. report another deep dimming in 2014. They suggest it may arise from dust grains close to star A being “stirred up” from strong stellar winds and moving into our line of sight.

Combining models and observations like today’s paper does is an incredibly useful technique to learn about how structures of all sizes form in the Universe. Tides affect everything from Earth, to stars, to galaxies. This is one of the first cases we’ve seen of a protoplanetary disk having a tidal encounter. The Universe is a messy place, and understanding dynamic interactions like RW Aurigae’s is an important step toward a clearer picture of how stars, planets, and galaxies form and evolve.