Roughly a quarter of the exoplanets we have discovered are close to or residing within their host star’s habitable zone (HZ). The habitable zone is defined as the range of distances from a host star in which a planet can harbor liquid water on its surface. There are two main sources for liquid water on planets: outgassing from the planet’s interior or water transferred through impacts from asteroids and comets. Some planets can be formed almost completely devoid water within the HZ, so the authors in this paper investigate the possibility of asteroids transporting water into the HZ during the late stages of planetary formation.

The authors model an asteroid debris disk as a ring of 10,000 asteroids (with a total water content equal to 200 times the mass of ocean water on Earth), and then simulate collisions between these to obtain a final mass distribution of asteroids. These asteroids are flung into the habitable zone as their orbits are perturbed and made increasingly eccentric by their host stars and a orbiting gas giant planet (ex. a massive planet similar to Jupiter). Over time, the asteroid belt becomes depopulated due to these ejections and mutual collisions between them.

For a binary star system, planetary orbits are tricky to compute since their orbits are generally unstable compared to a single star system. Similarly, it is difficult to define a habitable zone since there are radiation contributions from two host stars. For their simulation, the authors define the permanent habitable zone as the area in which a planet always receives the right amount of radiation to sustain surface liquid water on average.

By tracking the number of asteroids being ejected from the asteroid belt and entering the HZ, the results of these simulations show that a maximum of 70 Earth’s oceans worth of water (or 35% of the available water in the asteroid belt) can be transported to the HZ within a 10 Myr timescale (see Fig. 1). However this is a very short simulation time compared to the usual planetary formation timescale of 100 Myr, so these results are biased towards seeing fast and efficient transport of water. The authors also take into account water mass loss due to impacts between asteroids and ice sublimation due to the radiation from the host stars, but also assume all the water transported into the HZ will be delivered to the planet residing within. 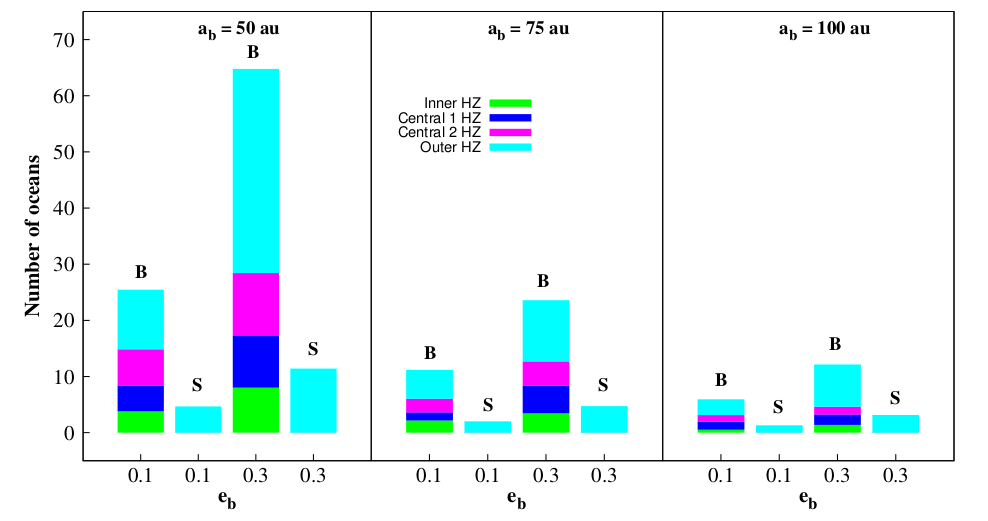 Fig. 1: The number of Earth’s oceans worth of water transported by asteroids into the habitable zone. The data are divided by orbital eccentricity (e_b) and semi-major axis (a_b) of the companion. “B” indicates a binary star system, and “S” indicates a single star. The colors indicate different sub-regions of the habitable zone into which asteroids cross.

Of course, this leaves the question of whether water transport via asteroids is a viable mechanism for supplying a single star planet system (like our own Earth) with liquid water. There are currently still several competing hypotheses as to how our planet obtained its water supply, but these sorts of simulations should shed light on the feasibility of water transport through impacting bodies.