The building blocks of life within planetesimals

Fig. 1: The principal structure of an amino acid. The “R” indicates the “side chain”, which varies across different amino acids. Source: Wikimedia Commons

Amino acids are a crucial ingredient for a vast majority of organic compounds, including our own DNA, and an important source of organic material that had to be delivered to young planets in our Solar System via meteoritic impacts. Therefore, by understanding where and how the first amino acids formed is a critical step to understanding when and how life formed in the first place. Life is hanging around in basically every biological niche on Earth no matter what life formation theory you believe in, be it abiogenesis (life arising from non-living matter in the primordial soup) or panspermia (the “contamination” of Earth by living microorganisms that are already ubiquitous throughout the Universe due to distribution by meteroids and asteroids). Not only Earth, far-away worlds like Jupiter’s moon Europa may also harbor life.

What do all these rocks want to tell us?

Fortunately, the meteorites that fall on Earth give us a record of the kind of materials they are made of. A relatively rare class of meteorites, the carbonaceous chondrites (C-type), are known for their high water, carbon (hence, carbonaceous) and organic contents and are therefore interesting to investigate with regards to the building blocks of life.

It is important to incorporate all findings from C-type meteorites into a comprehensive picture showing their general classifications; figure 2 shows this, despite the somewhat messy classifications (sorry geologists!). They are first sorted depending on the chemical composition (CI to CK) and then according to petrographic type, which means how elements within the meteorite are altered. Aqueous alteration, the process of transforming molecules to organic material, happens in very hydrated environments. Thermal metamorphism describes the transformation of meteorites under high-heat environments, which not organic material-friendly.

Amino acid distillery – how and where

Meteorites are thought to be the end-product of disruptional collisions between so-called parent bodies – planetesimals of several kilometers size in the early Solar System, alike nowadays asteroids. These guys were big enough to be heated up from the inside by radiogenic elements and therefore probably had an onion-like structure inside – very hot and dense in the inner part and cool in the outer part where there is not too much heat from the radionuclides.

Here, we obviously need a link between the different classes from Figure 2 and the physical origin of these classes. In the onion-shell picture, signs of thermal metamorphism mean the presence of hot temperatures, and hence formation deep within the parent body in a dry and dense environment (types 4-6 in Figure 2). On the other hand, aqueously altered samples have been formed in the outer shells of a parent body where there is a lot of water and significantly lower temperatures are expected (types 1-3 in Figure 2).

Cobb & Pudritz collected the abundance data results of numerous laboratory experiment. From these, they tried to relate the abundance of relatively simple amino acids to meteorite petrographic types and inferred the place in the parent body where these amino acids originally formed! One of their main results is presented in Figure 3. 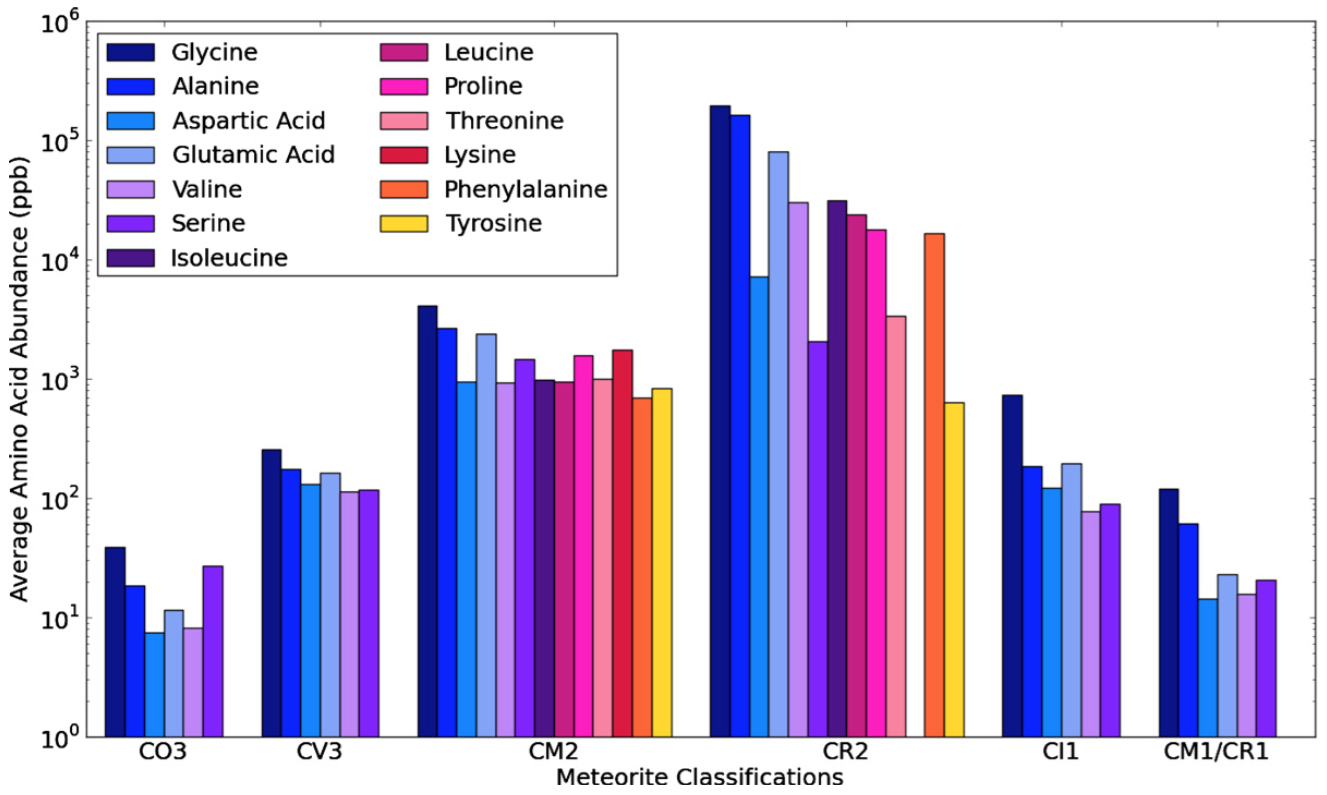 Fig. 3: Average amino acid abundances for different meteorite classes. Each color represents a specific amino acid type. Meteorites with petrographic type 2 show the most diverse and rich spectrum of amino acids. These types are thought to have been formed in intermediate layers of the meteorite parent bodies, which means that the temperatures and water abundances found in the intermediate layers favor the reaction rates for these compounds! Source: Cobb & Pudritz (2014)

The graphic shows the abundances of specific types of amino acids within meteorite samples of certain petrographic classes, as explained above. As can be seen, the type 2 samples contain the most diverse and rich abundances of amino acids, several orders of magnitudes higher than for the other types! Cobb & Pudritz think that the intermediate layers in parent bodies, to which these meteorite types belong, form an optimal environment for the formation of amino acids, which corresponds to temperatures from 200 to 400 degrees Celsius in a watery environment.

Why this is interesting and where to go from here

As a summary, Cobb & Pudritz argue that amino acids potentially formed in very specific layers of the parent bodies. They claim that they can now relate the origin of the amino acids within these layers to the chemistry and environment of the natal protostellar disk, which surrounded the forming Sun. By understanding more about the environment needed for the building blocks of life to emerge, we come closer to a deep understanding of the processes behind the emergence of life and can possibly use these results to gain knowledge about the frequency of life on other planets and moons in the solar system and maybe even in extrasolar systems. Therefore, wait for more about the origins of life in Nature’s Starships Vol. II…! (And read about it next month. 🙂 )