Twenty years ago, there was much less debate over how planetary systems formed and evolved. Our Solar System seemed to be a natural occurrence that would likely be reproduced around other stars. However, these theories were sculpted from a sample size of one, and the avalanche of exoplanet discovery over the past two decades has revealed that our home may be an oddball in the menagerie of planetary systems in the Milky Way. Two of the many surprises that planet-hunting telescopes such as Kepler have unveiled are giant Jupiter-sized planets residing on the doorstep of their host stars (hot Jupiters), and an abundance of planets that are between the sizes of Earth and Neptune (super-Earths/mini-Neptunes), many of which also in the close vicinity of their star.

The mechanism that causes some hot Jupiters to be in short-period orbits of just a few days is still up for debate. Front-running theories are inward migration through the protoplanetary disk and tidal circulation of an orbit that was made highly eccentric through a gravitational interaction. Regardless of what brought the hot Jupiters so close their stars, observations tell us that the planets are there, and physics tells us that won’t stay there. Tidal dissipation will cause these tight-orbit gas giants to lose orbital energy by transferring angular momentum to the star’s spin, causing the planet to creep in closer and closer to their host star. Eventually, they could get close enough for their Roche Lobe to overflow, allowing the star to win a gravitational tug-of-war and start stealing away gas from the planet’s atmosphere. Today’s paper investigates the evolution of hot Jupiters through this dynamic evolutionary phase, and examines if star-planet interactions could transform these hot Jupiters into super-Earths. 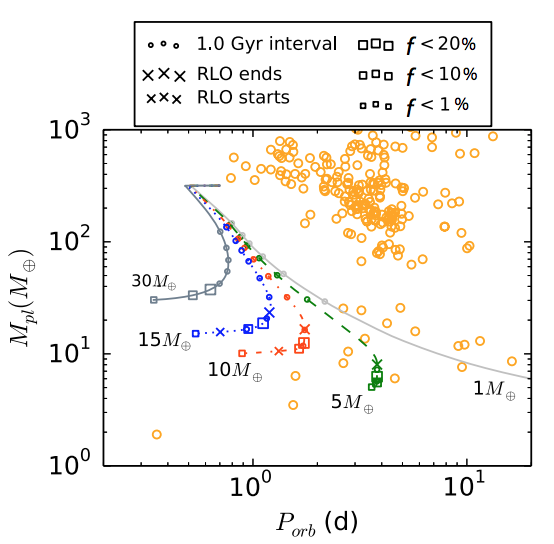 Figure 1. Planetary mass vs orbital period, in units of Earth mass and days. This simulations used conservative mass transfer, meaning all the mass that left the planet was accreted by the star. Open orange circles represent the location of confirmed exoplanetary systems hosting only one planet. Colored lines are evolutionary models for different core masses, with evolution proceeding downward. “Xs” mark the end/start of RLO, and “squares” mark the times when the mass of the envelope drops below 20%, 10%, and 1% of the total mass. Colored open circles along the evolutionary tracks mark 1 billion year intervals. Figure 3 from the paper.

The figure to the right shows the evolution of hot Jupiters using the stellar binary evolution code MESA. The orange circles represent the location of confirmed exoplanetary systems, and the lines represent the evolutionary tracks of simulated hot Jupiters. All of the simulated planets have a mass of Jupiter orbiting stars with a mass of the Sun, and began evolving at the same distance from the host star and at the same time in the system’s history. The authors varied the mass of the planet’s solid core (between 1-30 Earth masses) and whether the mass transfer was conservative or non-conservative (i.e. whether all or just a fraction of the mass that is stripped from the planet was accreted by the star). Irradiation and subsequent photoevaporation of the planet’s gas were also taken into account to reproduce realistic atmospheric loss. Simulated planets evolve from the top to the bottom of the plot, with colored circles along the lines of evolution representing 1 billion year intervals.

As a concrete example of what’s happening, let’s take a look at the planet with a 10 Earth-mass core using conservative mass transfer (red dashed line in figure 1).  First, the orbit shrink for about 100 million years as tides transfer angular momentum from the orbit to the star’s spin (left along the short horizontal line). At attaining a period of about half a day (a semi-major axis of about 0.01 AU) the planet’s Roche Lobe overflows, and its orbit begins to expand due to the mass loss. Though it moves further away from the star, as it loses mass the planet has less of a grasp on its atmosphere, and continues to lose matter to the star. When it reaches an orbital period of about 1.2 days, the Roche Lobe overflow (RLO) phase stops (the first X).  Photoevaporation continues to eat away at the atmosphere for the next billion or so years, dropping the fraction of atmosphere down to 20% and 10% of its original value (the big and medium squares, respectively), and tidal decay once again brings the planet closer to its star. RLO once again ensues for a second time (the second X), but tidal decay overpowers it now that there is not much mass left to eat up and cause the orbit to expand. The orbit shrinks and the fraction of the planet’s remaining atmosphere drops to 1% (the final small square), leaving behind a rocky core with a tenuous atmosphere about 10 times the mass of the Earth…a super-Earth! Though this particular planet may be doomed to end up inside its star, others (see the green evolutionary track) can leave the super-Earth far enough away from its star for tidal decay to be a negligible effect. 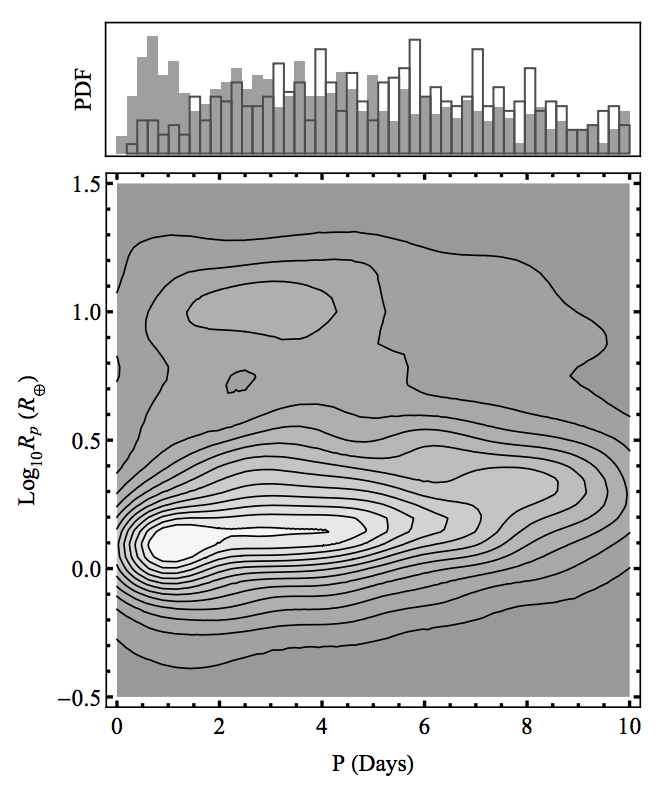 This evolutionary pathway is more than just a neat trick one can play using a stellar binary evolution simulation – this process may actually be taking place in planetary systems in the Milky Way! First of all, in figure 1 we can see that there are many observed hot Jupiters (orange circles in the upper-right of the plot) near the orbital period in which these simulations started, the closest of which should already be experiencing significant orbital decay through tides. We also see a good deal of hot super-Earths (scattered orange circles at the bottom of the plot) that fall near the simulated evolutionary trajectories. Second, most observed super-Earths consist of a rocky or icy core surrounded by a hydrogen/helium envelope that makes up a small fraction planet’s total mass, similar to the end products of these simulations. Another kicker is shown in figure 2, which is from an earlier paper by the lead author and collaborators. The top histogram shows the orbital periods of single-planet Kepler candidates (grey) and multiple-planet Kepler candidates (outlined) with radii less than 5 Earth-radii (i.e. not hot Jupiters). It is unlikely that these populations are from the same parent distribution because of the excess of single-planet systems sitting around 1-day orbits. The bottom contour maps the distribution of planet sizes and orbital period for single-planet system Kepler candidates, clearly a bimodal distribution with the populations of hot Jupiters and hot super-Earths represented by the peaks at 10 and 1 Earth radii, respectively. These pieces of evidence along with the simulations of today’s paper may indicate that hot Jupiters and hot super-Earths are more intimately connected than previously thought – the same planet caught at different times in its evolutionary history. The only thing missing – observing a hot Jupiter experiencing RLO, which we will hopefully find as we continue the search for more bizarre worlds in our Milky Way.

Disclaimer:  I am a student in CIERA/Northwestern University, where two of the authors on this paper are from. However, I did not play any role in this research. I just think it’s cool!

Also, check out this astrobite for another article of planetary metamorphoses!