The Rocky Road to Gas Planet-hood

The space between the stars is actually not so empty.  It’s also quite dusty. It’s so dusty, in fact, that if you brought a large parcel of space to the densities you find on Earth, you would hardly be able to see your hand if you stretched your arm out in front of you.  This interstellar dust—typically only a micrometer across, a fraction of the thickness of a human hair—is the stuff that planets are made out of.  The formation of planets is really an incredible saga of how the lowly dust grain grows to planet proportions, a transformation of millions of years, a growth in size by a million million, and takes the conglomeration of about a hundred million million million million million million grains (that is, ~10^38 grains).

It all begins with the birth of a star, when gigantic cold clouds of gas and dust are flattened into a gaseous dusty disk encircling a growing protostar by the concerted powers of  angular momentum conservation and gravity. The grains orbit the protostar within this disk. When the orbits of two grains intersect, they can collide and possibly stick together. This process continues over and over again to produce large grains, which in turn collide with each other to produce small rocks, which collide to form “planetesimals” the size of asteroids, and so on, scurrying with bolts and jolts up the size scale until they eventually form rocky bodies the sizes of Mercury, Mars, the Earth, thousands of kilometers across.  These rocky bodies can become terrestrial planets or the seeds of the cores of gas and ice giants such as those found within our own Solar System and beyond.

The authors of today’s paper attempt to explain why some of these planetary embryos remain largely unchanged, barren, and purely rocky while others end up cloaked with a gas envelope.  They focus on planets discovered by the Kepler Telescope that are a few to several times more massive than the Earth, which they divide into two types: those that are rocky, or super-Earths, and those that have a thick gaseous atmosphere, or mini-Neptunes.

How might the mini-Neptunes have acquired their gas?  The disks in which the transformation from grain to planet occurs is actually mostly gas—the dust makes up only about 1% of the mass of the disk—and thus a natural guess as to the source of planet atmospheres.  But there’s a hitch.  The gas in a disk is fated to banishment, first as the disk drains onto the growing, massive protostar at its center, then by evaporation as the newborn star heats the disk to temperatures so high (hundreds to thousands of Kelvins) that the gas can escape the gravity of the star and disk.  However, planetary embryos can’t hold onto an atmosphere unless they’re fairly massive, about an Earth mass or two.  Thus the road to mini-Neptune-hood (or to a gas/ice giant, for that matter) is a growth race against the shrinking supply of gas.

So what affects how quickly an embryo grows?  In order for growth-inducing collisions to occur between planetary embryos, their orbits must cross.  Close passages of rocky bodies with similar masses can stir up their velocities, pushing them into skewed, elliptical orbits that allow the embryos to traverse a broad range of radii (as opposed to circular orbits, which restricts the embryo to a single radius), increasing the chances of orbit crossing and thus growth.  Working against these velocity-stirring, growth-inducing, gravitational encounters is, once again, the gas.  Much like how the atmosphere reduces the speed of projectiles or a marble dropped into honey stops moving—a process known as dynamical friction—the gas attempts to erase the effects of stirring by bringing the rocky bodies to its own orbital speed, slowing down the rocky bodies sped up by close encounters and conversely, speeding up those that were slowed down.

But not all hope is lost.  The solution?  Wait until the gas disappears enough to stop erasing the velocity stir-ups that encourage growth.  The authors estimate that the gas begins to have a negligible effect on embryo velocities when a disk has similar surface densities of gas and dust.  One crucial consequence of this is that it shortens the time during which the embryos can acquire gaseous envelopes—the gas sticks around for a short million years by the time it stops affecting embryo velocities.  It helps if the disk started with more dusty solids, which would produce more material for the the embryos to grow from.  In fact, the authors estimate that planetary embryos in disks with larger solid surface densities grow exponentially faster—a result they confirm with more detailed N-body calculations. 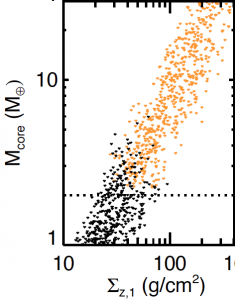 To confirm that the embryos that grew massive enough to begin acquiring a gaseous envelope had enough time to become mini-Neptunes, the authors ran simple one-dimensional models of envelope growth and used those results to estimate the amount of gas each planet in their N-body simulations would have. They confirmed that disks with larger solid surface densities grew all its embryos fast enough to convert them into gas-enveloped mini-Neptunes before the gas completely disappeared, while disks with lower surface densities produced a mix of gaseous mini-Neptunes and purely rocky super-Earths (see Figure 1).

While these calculations are simplified, they highlight the importance of the availability of solids on the formation of planets.  The differences in the amount of solids a disk has may be able to explain the lack of purely rocky planets around high-metallicity stars (which they assume was once encircled by a disk with more solids than those around low-metallicity stars) observed by Kepler. However, their model cannot explain why we’ve observed low-metallicity stars with mini-Neptunes. It’s possible that solids could accumulate in disks around low-metallicity stars, producing solid surface densities high enough for massive rocky embryos to form quickly and transform into mini-Neptunes before the gas disappears. The mini-Neptunes could also have formed further out in the disk, then migrated inwards to where we observe them today.  The full story of the origins of super-Earths and mini-Neptunes awaits unraveling with further work.