Supernova with magnetar as origin of gamma-ray burst

Beware! It is summer time and today’s Astrobite deals with two very hot topics that are prevalent on any astronomy related TV program: supernovae and gamma-ray bursts. Observations of supernovae have changed mankind’s world view significantly in the past centuries. Supernovae are crucially important for stellar nucleosynthesis because they produce all elements heavier than iron. Moreover, the observation of SN1572 by Tycho Brahe was extremely important. Even though he interpreted it as a new star rather than a dying star, his observation gave strong evidence that the universe cannot be static beyond the solar system as postulated by the Aristotelian idea. (fun fact: his actual name in Danish is “Tyge Brahe”, which is pronounced like this.)

The first Gamma-ray burst observations, though much more recent in history than SN observations, were enthralling from a scientific aspect, and maybe even more from a political history aspect. During the cold war, the US military launched the Vela satellites to monitor potential nuclear bomb activities in the Soviet Union. In 1967, two of these satellites (Vela 3 and Vela 4) detected a strong signal of gamma radiation that could not be explained by nuclear activities. Later on, researchers in Los Alamos analysed more datasets and found several other gamma-ray burst events. After detailed analysis they concluded that these flashes of gamma-ray signals must be due to very energetic explosions far away from the solar system and they gave it the name gamma-ray burst. Eventually, they published their results six years later in ApJ triggering plenty of papers dealing with the phenomenon. Nowadays, there is agreement among astronomers that a specific type of supernova (SN Ic) is linked to at least some of the bursts in the most common group of gamma-ray bursts. The commonly observed gamma-ray bursts last for more than 2 seconds, which is quite long compared to observations of other bursts. Hence, they are called long-lasting gamma-ray bursts and 70 % of all observed gamma-ray bursts belong to this group.


Finding a link between gamma-ray bursts and magnetars

The authors of today’s paper extend the picture further to gamma-ray bursts of even longer lifetimes than common long-lasting bursts. They observed a so called ultra-long-duration gamma-ray burst, which is a burst that lasts for more than 10 thousand seconds (more than 2.8 hours). This particular burst (GRB111209) was observed for about 50 days, and it turned out that the burst evolved in time and colour in a very similar way to known GRBs related to type Ic supernovae. However, there are some substantial differences in the spectrum at long wavelengths compared to the spectra observed in supernovae linked with ordinary long-lasting gamma-ray bursts. The observed spectrum hints at a significantly lower metal abundance in the vicinity of this supernova and the authors interpret the observations in the following way:

The supernova is the result of the death of a very heavy star. During the explosion, the inner part of the former heavy star might collapse and form a fast-rotating neutron star with an extremely strong magnetic field around it. The object is therefore called a magnetar and it is extremely energetic. If this energy – or a significant part of it – is released in form of a bipolar jet, it has two consequences in Greiner et al.’s interpretation:

Finally, the authors test their idea with a physical model that considers the additional injection from a magnetar to the supernova spectrum and they find that it fits the data pretty well, although the best fit of a supernova powered by radioactive decay is also within the error bars (compare dark and light blue curve to dark blue points in figure 1, which is figure 2 in the paper). However, Greiner et al. rule out radioactive decay as the reason for the observed curve, because the derived mass of 56Ni significantly exceeds the known mass in known gamma-ray burst related supernovae significantly. 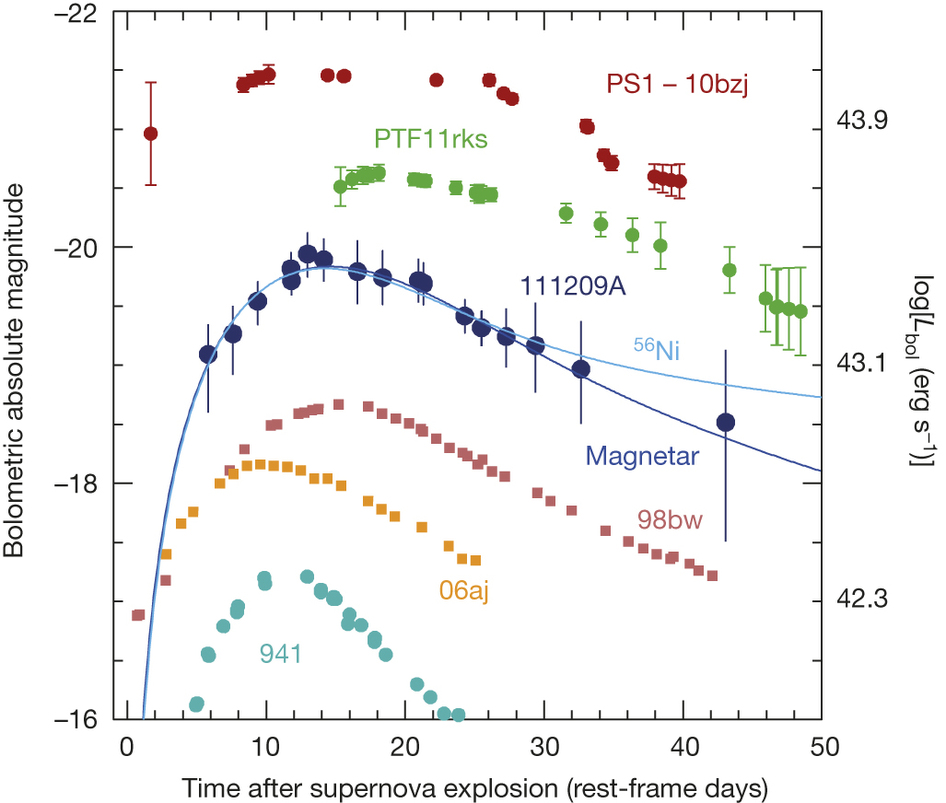 Fig. 1: Light curve of the supernova suggested to be linked to be linked to the ultra-long-gamma-ray burst (111209A) plotted together with the evolution of known gamma-ray bursts (941, 061aj, 98bw) as well as for super-luminous supernovae (PTF11rks, PS1-10bzj). The dark blue line shows the best fit, when considering the spectrum of a supernova enriched by a magnetar. The light blue line illustrates the best fit if the supernova was powered by radioactive decay.

The attractive part of their interpretation is that it links two distinct explanations. The considered supernova is more luminous than all known gamma-ray burst related supernovae, though it is less luminous than super-luminous supernovae that are linked to the formation of magnetars. Loosely speaking, you can summarize their interpretation in this way: The particular ultra-long-lasting gamma-ray burst observation combined with the particular supernova is a hybrid of two known effects.