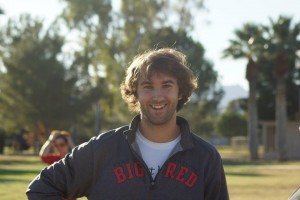 Today’s post was written by Tom McClintock, third year graduate student in Physics at the University of Arizona. His research interests include cosmology and large scale structure. Tom did his undergrad at Amherst College and a MSc in high performance computing at the University of Edinburgh. In addition to his research, he is in a long term relationship with ultimate frisbee and dungeons and dragons.

Among the tests passed by the standard cosmological model, Big Bang Nucleosynthesis (BBN) may be the most rigorous, in that predictions of light element abundances are consistent with observations over ten orders of magnitude. All of this production occurs within the first fifteen minutes(!) following the Big Bang, and ceases once weak reactions producing neutrons fall out of equilibrium. However, for over thirty years there has been tension over the abundance of lithium-7 between theoretical BBN calculations and measurements of metal-poor stars known as the Cosmic Lithium Problem (which astrobites has discussed here and here). The numerical simulations of

CDM predict an abundance that is over three times that found on the surface of Population II stars. Something has to give.

The authors of today’s paper investigate a nuclear physics solution, the reaction rate 3He + 4He

+ 7Be, shortened to 3He(a,g)7Be. Production of beryllium-7 is important because 7Be eventually decays to 7Li through electron capture. Nuclear reactions are described by reaction rates, which in turn are described by interaction cross sections, which can be measured by experiments. In the case of 3He(a,g)7Be, any change in the measured cross section affects the theoretical BBN 7Li yield, and thus the compatibility between the standard cosmological model and abundance observations.

In addition, 3He(a,g)7Be is a critical step in both the pp-2 and pp-3 branches of the pp-chain of hydrogen burning in the Sun. Both of these branches also produce electron neutrinos, observable on Earth. The authors use new stellar neutrino flux data published by the BOREXINO collaboration in order to constrain the 3He(a,g)7Be reaction rate. From there they recalculate the theoretical 7Li yield and confirm the significant tension between theory and observation.

Nuclear reaction cross sections have a temperature dependent sweet spot, called the Gamow peak, which allows for a maximum reaction rate to occur. For this reason, it is much easier for experiments to probe cross sections near the Gamow peak; at lower energies there isn’t enough juice to get the nuclei to smash together and at higher energies they whiz by each other too fast. Unfortunately, the energy range of interest (0.1 – 0.5 MeV) for BBN temperatures (~500,000 K) is too low, and lies just out of the capabilities of most experiments. Therefore, in order to perform BBN calculations it has been necessary to extrapolate the cross section down to these energies.

Takacs et al. sidestepped this limitation by utilizing the solar neutrino data to constrain the reaction rate at an energy lower than that of BBN, thereby removing the need for extrapolation.

By assuming a standard solar model (SSM) as well as the standard neutrino oscillation model, the authors determine that the predicted neutrino flux depends on a variety of parameters such as solar luminosity, age, opacity, and nuclear reaction rates. They then use calculations of the sensitivity of the neutrino flux for a variation in the 3He(a,g)7Be reaction rate in order to write this rate in terms of the observed flux, the expected flux from SSM, and the best theoretical reaction rate from SSM. As shown in the figure below, their data point was measured at an energy almost a factor of ten below all previous measurements of the cross section. 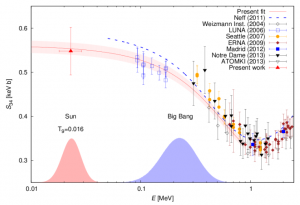 The so-called “astrophysical S-factor” S34 is a parameterization of, and is directly proportional to, the interaction cross section. Takacs et al. were able to measure S at an energy almost a factor of ten lower than the best accelerator experiments. The fit to S is given as a red line, while the blue dashed line is calculated analytically from theory but due to numerical limitations cannot reach energies considered in this paper. The solar Gamow peak is given as the red shaded region, and the blue shaded region indicates the energy range for BBN. This figure is from Takacs et al.

The cross section for 3He(a,g)7Be was lower by about 5% compared to the value previously used in several BBN calculations, and the precision increased almost by a factor of three, mostly due to the elimination of extrapolation. Using this cross section, the authors updated the reaction rate in a public BBN code and determined a small increase in the disagreement between the theoretical 7Li abundance and the abundance observed on the surface of metal poor stars. However, they caution that further work on the SSM may change their error budget for the 3He(a,g)7Be cross section.

This study both confirms and exacerbates the cosmic lithium problem (albeit slightly), yet it demonstrates how astrophysical processes even in our solar system can serve as probes into fundamental physics. BBN marks the boundary between precision and speculative cosmology, and the lithium problem restricts researchers from pushing this boundary further.