Title: The Carnegie Hubble Program: Distance and Structure of the SMC as Revealed by Mid-Infrared Observations of Cepheids

First Author’s Institution: Observatories of the Carnegie Institution of Washington

Cepheid variable stars have long been famous for the role they play in the cosmic distance ladder. Intrinsic luminosities are generally difficult to measure, but because the luminosities and periods of variation of Cepheids follow a well-known relationship called the Leavitt Law (LL—you might also see this called the Period-Luminosity or PL relation), we can measure their periods and then calculate their intrinsic luminosities. The LL for a variety of wavelength bands is shown in Figure 1. Once we know their intrinsic luminosities, we can determine their distances. In addition, since Cepheids are supergiant stars, and are therefore very luminous, we can also use them to derive distances to objects much farther than we could with parallax. 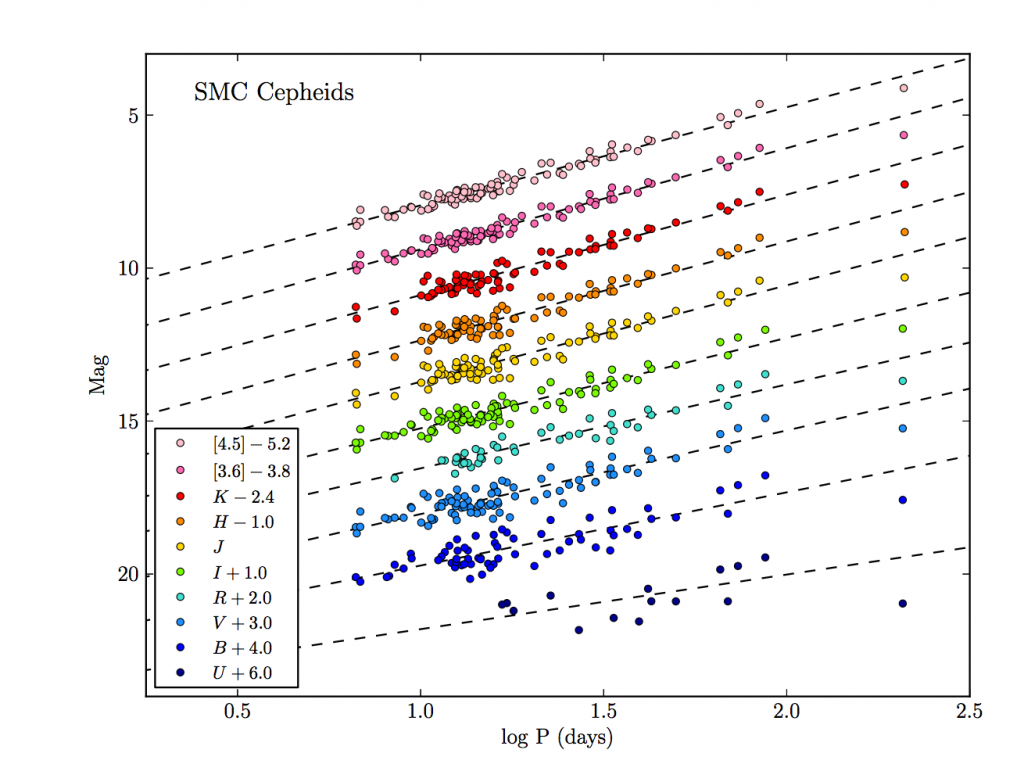 Figure 1: Figure 3 from the paper, which shows the Leavitt Law for 10 wavelength bands from U (the shortest) to 4.5 micron (the longest). We can see that there is a drop in the dispersion and increase in slope as we move from the shorter wavelengths to the longer wavelengths. The 3.6 micron-band has darker pink points.

Usually when we look at distances—for example, to other galaxies—that we’ve derived with Cepheids, we consider all of the Cepheids in each galaxy in aggregate. Though Cepheid periods and luminosities are quite closely related, there is still some dispersion intrinsic to the LL, so we get more accurate distance measures when we consider what the LL looks like for all of the Cepheids in a galaxy rather than just using distances derived from individual stars.

Previous observations of Cepheids in the SMC have indicated that the south-west side of the galaxy was farther away from us than the central or north-east portion. The authors of today’s paper noticed that while the intrinsic dispersion of the LL in the mid-infrared (3.6 µm) for the Large Magellanic Cloud (LMC) and Milky Way is about ±0.10 mag, in the SMC, it is 0.16 mag. They focus in particular on this bandwidth because it has the lowest intrinsic dispersion (see Figure 1), which also makes it easier to calculate precise distance moduli. This intrinsic dispersion can be traced back to the width of the instability strip—the part of the stellar color-magnitude diagram where Cepheids and other variable stars live. The instability strip looks narrower in the mid-infrared, causing  smaller dispersion in the LL at those wavelengths as well. 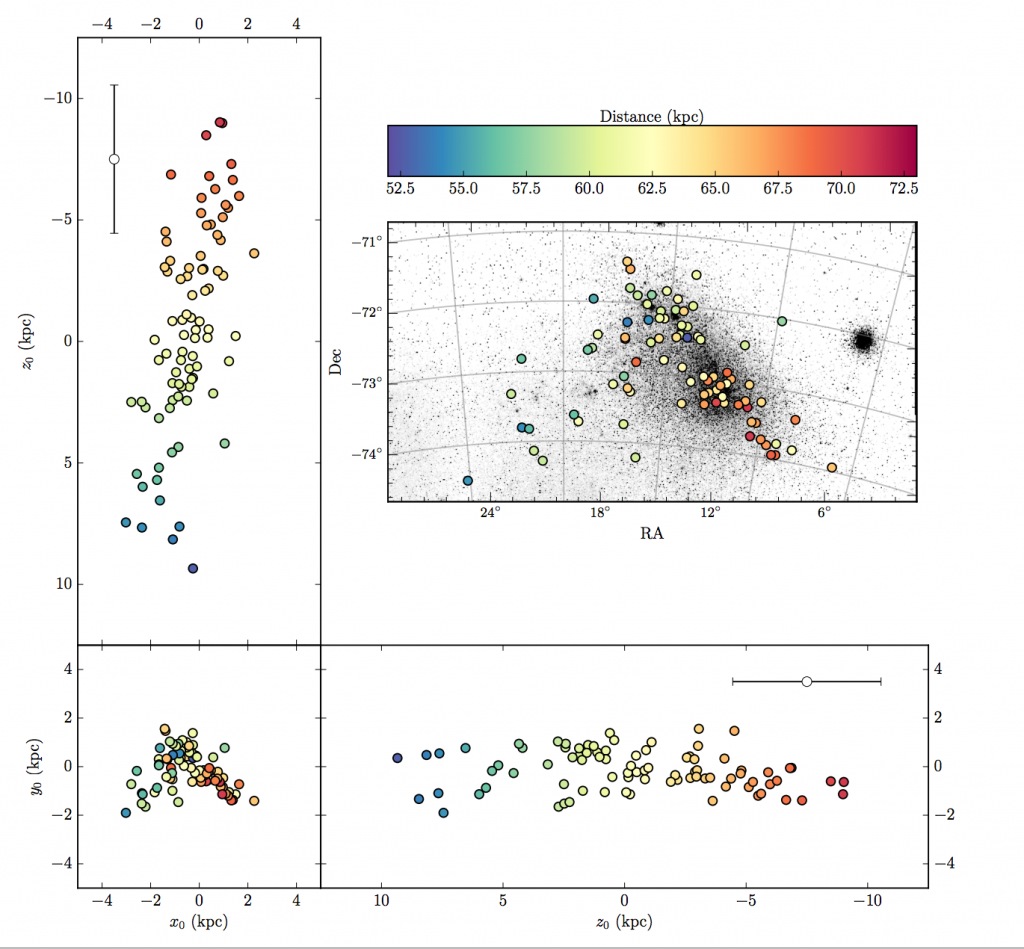 Figure 2: Figure 6 from the paper, which shows the individual distances derived from the Cepheids. The closest Cepheids are in blue while the farthest are red. In total, they span about 20 kpc. The white points  with error bars show what the typical uncertainty in the distance to each Cepheid looks like. The three plots to the side give an alternative view in each of the three planes of a cartesian coordinate system, making the “sausage”-like shape of the SMC more obvious. The image on the upper right-hand corner shows the SMC and distribution of Cepheid as they appear on the sky.

They attribute the higher dispersion in the LL for the SMC to the geometry of the galaxy—meaning that some of the Cepheids are closer to us than others—this is possible given the SMC’s known large line-of-sight depth. Since extinction can contribute to this spread in the LL as well, they also correct each Cepheid for extinction. However, even after dereddening, they find that there is still a higher than expected dispersion in the Leavitt Law that cannot be attributed to extinction. With this additional dispersion attributed to the geometry of the SMC, they find that the south-west corner of the SMC is about 20 kpc farther away than the north-east corner. Figure 2 shows the individual distance moduli of the SMC Cepheids.

Finally, the authors also compare the distance moduli that they measured for their Cepheids with theoretical models that seek to describe the mechanism that produced the irregular shape of the SMC. In particular, they look at a model of the mechanism that produces the “wing” of the SMC—a portion of the galaxy that is being drawn towards the LMC. They find that the locations of the young stars (like Cepheids) in the galaxy are in good agreement with where they are predicted to be by the models. They suggest that in the future, such measurements of Cepheids can also be used to inform simulations of galaxy dynamics as well, thus also contributing to our understanding of the dynamical histories of these galaxies. While we will probably have to wait a bit longer for reliable individual Cepheid distance moduli, it’s exciting to think that we could eventually use these stars not only to figure out how far away another galaxy is, but also to understand its structure.