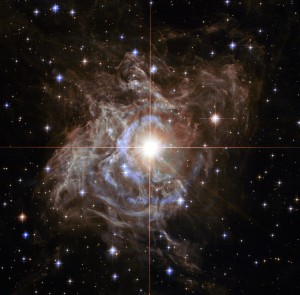 Figure 1: RS Puppis, one of the brightest and longest-period (41.4 days) Cepheids in the Milky-Way. The striking appearance of this Cepheid is a result of the light echoes around it. Image taken with the Hubble Space Telescope.

It’s often tempting to think of stars as unchanging—especially on human timescales—but the more we study the heavens, the more it becomes clear that that isn’t true. Novae, supernovae, and gamma-ray bursts are all examples of sudden increases in brightness that stars can experience. There are also many kinds of variable stars—stars that regularly or irregularly change in brightness from a variety of mechanisms. Classical Cepheid variables are supergiant stars that periodically increase and decrease in luminosity due to their radial pulsations. They are stars that breathe, expanding and contracting like your lungs do when you inhale and exhale. Their regular periods, which are strongly related to their luminosity by the Leavitt law, make them important for measuring distance. Despite their importance in cosmology (as standard candles) and stellar astrophysics (by giving us insight into stellar evolution), there is still a lot that we don’t understand about classical Cepheid variables. One of the biggest mysteries that remains in characterizing them is the Cepheid mass discrepancy.

The Cepheid mass discrepancy refers to the fact that, at the same luminosity and temperature, stellar pulsation models generally predict that the Cepheids will have lower masses than stellar evolution models suggest they would. Several possible resolutions to the Cepheid mass discrepancy have been proposed, including pulsation-driven stellar mass loss, rotation, changes in radiative opacities, convective core overshooting in the Cepheid’s progenitor, or a combination of all of these. Measuring the Cepheid’s mass independently would help us constrain this problem, but as you might imagine, it’s not easy to weigh a star. Instead of a scale, our gold standard for determining stellar masses is an eclipsing binary.

An eclipsing binary system is just a system in which one of the orbiting stars passes in front of the other in our line of sight, blocking some of the other star’s light. This leads to variations in the amount of light that we see from the system. Because the orbits of the stars must be aligned just edge on to us this happen, eclipsing binaries are quite rare discoveries. However, when we do have such a system, we know with exactly what angle of inclination we are observing it. This makes it possible for us to accurately apply Kepler’s laws to get a measurement for the mass. Eclipsing binaries are highly prized for this reason (they’ve also gained some attention for being a highly-accurate way to measure extragalactic distances, but that’s another story altogether).

Cepheids in eclipsing binary systems are even rarer—there are currently a total of four that have been discovered in the LMC. One has been discussed on astrobites before (it’s worth looking at the previous bite just to check out the crazy light curve). Since there are so few, and since their masses are so integral to understanding them and determining their basic properties, it’s even more important to study each system as carefully as we can to help us solve these stellar mysteries. The authors of today’s paper take a close look at one of the few eclipsing binary systems we have that contains a Cepheid. 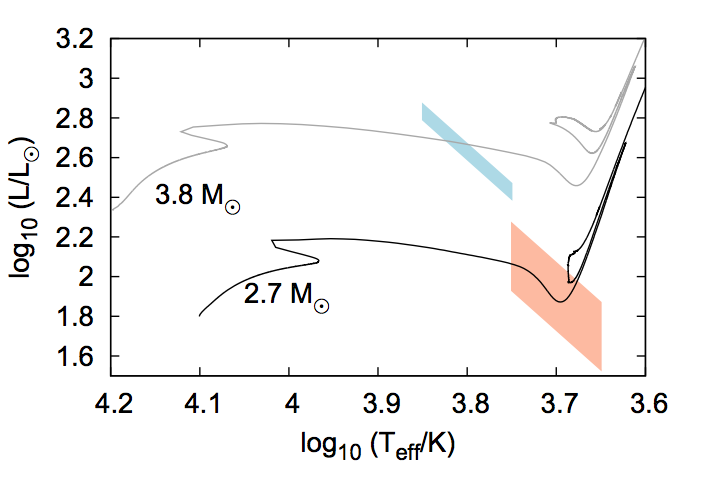 Figure 2: Figure 1 from the paper, depicting the stellar evolution model for the 3.8 solar mass Cepheid and its 2.7 solar mass red giant companion. The blue and orange shapes show the regions of the Hertzsprung-Russell diagram for each star that is consistent with its measured radius.

Unfortunately, rather than helping us, the subject of today’s astrobite, CEP1812, seems to cause more problems for us. Stellar evolution models indicate that the Cepheid appears to be about 100 Myr younger than its companion star, a red giant (and we expect them to be the same age). Figure 2 shows the evolutionary tracks of the red giant and the Cepheid. Previous papers have suggested that the Cepheid could have captured its companion, but today’s authors believe that this Cepheid could be even stranger—it may have formed from the merger of two smaller main sequence stars. This would mean that the current binary system was once a system of three stars, with the current red giant being the largest of the three. The merger would explain the apparently-younger age of the Cepheid because the resulting star would then evolve like a star that started its life with a mass the sum of the two merged stars, but it would look younger. The red giant, which would have been the outermost star, could have played a role in inducing oscillations in the orbits of the two smaller stars that caused them to merge.

The authors test this proposal by evolving a stellar model of two smaller stars for about 300 Myr before allowing them to merge. The mass gets accreted onto the larger of the two stars in about 10 Myr, and the resulting star then evolves normally, but appears younger because the merger mixes additional hydrogen (lower mass stars are less efficient at hydrogen burning) into the core of the star, which matches the observations.

The authors argue that if CEP1812 is formed from the merger of two main sequence stars, it would be an anomalous Cepheid. Anomalous Cepheids have short periods (up to ~2.5 days), are formed by the merger of two low-mass stars, usually only about ~1 solar mass, have low metallicity, and are found in older stellar populations. There they stand out, since these Cepheids end up being much larger and younger than the surrounding ones. However, CEP1812 is about 3.8 solar masses and also at a higher metallicity than most anomalous Cepheids, making it a highly unusual candidate. CEP1812’s period-luminosity and light curve shape are also consistent with both classical Cepheids (which are the kind we use in measuring distances) and with anomalous Cepheids.

If CEP1812 is an anomalous Cepheid, it straddles the border between what we think of as “classical” Cepheids and what we think of as “anomalous” Cepheids. This would make it a risky Cepheid to use for cosmology, but interesting for bridging the gap between two different classes of Cepheids. The possibility of it being an anomalous Cepheid is just one resolution to its unique properties. However, if it does turn out that CEP1812 not just another classical Cepheid, it could be the first of a fascinating subset of rare stars that we haven’t studied yet. Ultimately it’s still too soon to tell, but the authors have opened up an interesting new possibility for exploration.