Blowing Up Death Stars is Bad for the Economy 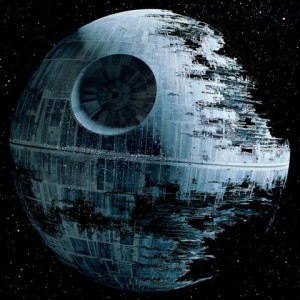 The second, incomplete Death Star. Its destruction in 4ABY would have had serious repercussions for the galactic economy. Image Credit: Wookiepedia

As it’s holiday time, today I will take a little detour from astro-ph and try to address the drastic lack of Star Wars clickbait on Astrobites this month. No spoilers for the Force Awakens will appear.

The end of Return of the Jedi depicts celebrations across the galaxy (see, it’s still about space), as the destruction of the second Death Star frees the people from the tyrannical yoke of the Empire. However, today’s paper suggests that a far more likely outcome is an economic catastrophe.

In order to calculate the financial effects of the Death Star’s destruction, Feinstein first estimates the construction cost of the battle station. The amount of steel needed is already known, and cited by the US Government as a reason for their unwillingness to build a Death Star. To convert this into the full cost, Feinstein uses the cost of the USS Gerald R Ford, the newest aircraft carrier in the US  Navy, to work out the ratio of steel cost to full cost. This gives a figure for the full cost of the Death Star project of $193 Quintillion ($193 000 000 000 000 000 000). For comparison, the International Space Station has cost approximately one hundred billion dollars.

However, as pointed out by the Galactic Empire themselves, a galaxy-spanning civilization would be much better equipped to shoulder this cost than one small planet. To calculate the Death Star’s cost as a fraction of Gross Galactic Product (GGP), Feinstein turns to the closest Earth-based analogue, the development of the atomic bomb.

Given the unexpected destruction of the first Death Star, the hastily constructed replacement would have been funded entirely by government and corporate borrowing. This borrowing would be promptly defaulted upon, on account of the government no longer existing. 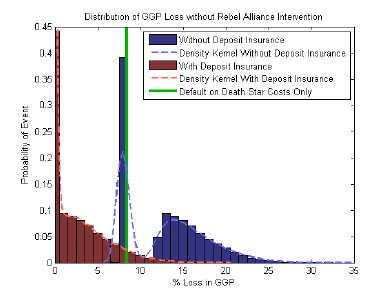 Simulated loss to GGP caused by the destruction of the second Death Star. The x-wing shows the percentage loss of GGP, and the y-wing shows the probability of that scenario occurring. The green line shows the raw cost of the Death Star only, with the shock to the market producing further losses

How much reserves would the Rebel Alliance have to hold to bail out the economy? Feinstein considers several scenarios, depending on how much of a hit to the galactic economy the nascent New Republic is willing to take. In the cheapest of these scenarios, where the galactic economy drops by 1%, the Rebellion has to find $938 Quintillion, or 15.4% of GGP. For comparison, Feinstein notes that the drop in US GDP associated with the 2008 Financial Crisis was around 1.6%. Averting galactic recession entirely would cost closer to 21.5% of GGP, or $1312 Quintillion. Without those funds, the galactic economy would undergo a collapse similar in magnitude to the Great Depression.

Did the Rebellion have those reserves? Feinstein finds it unlikely, given the somewhat rag-tag fleet they deployed at the Battle of Endor, as well as the known “Shoot First” policies of its leaders.

The paper concludes that the destruction of the second Death Star would cause the Galactic economy to “enter an economic depression of astronomical proportions”. The Rebellion defeated the Empire, but by tying up the galaxy’s economy in one huge project, Palpatine may have had the last laugh.

Happy Christmas, and may the Force be with you.