Welcome to Day 3 of the winter American Astronomical Society (AAS) meeting in Kissimmee! Several of us are attending the conference this year, and we will report highlights from each day here on astrobites. If you’d like to see more timely updates during the day, we encourage you to follow @astrobites on twitter or search the #aas227 hashtag.

The Henry Norris Russell Award is the highest honor given by the AAS, for a lifetime of eminence in astronomy research. This year’s award went to Giovanni Fazio of the Harvard-Smithsonian Center for Astrophysics. Fazio became a leader in gamma ray astronomy before switching mid-career to the study of infrared astronomy, and he gave his award lecture on the latter subject, specifically on the Spitzer Space Telescope, one of the most successful infrared telescopes of all time. 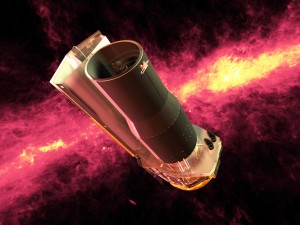 Spitzer has been operating for more than twelve years, and has resulted in over six thousand papers in refereed journals in that time. The telescope sits in an Earth-trailing orbit around the Sun, and is now farther from the Earth (1.4 AU) than the Earth is from the Sun. Fazio gave the audience a fascinating overview of the science done by Spitzer over more than a decade. One of the most productive areas of research for Spitzer is the study of exoplanets, which hadn’t even been discovered when the Spitzer Telescope was first conceived. Spitzer’s high sensitivity and ability to observe exoplanets over many orbits has made it a powerhouse for learning about the temperatures, atmospheres, and orbits of exoplanets. The list of examples that Fazio provided included the first global temperature map of an exoplanet (HD 189733b), the detection of the closest transiting exoplanet (HD 219134b), and the measurement of thermal emission from a super-Earth (55 Cnc e). Spitzer’s large distance from the Earth (specifically, the ground-based telescopes on Earth) even allowed astronomers to observe an exoplanet via gravitational microlensing using a special technique called space-based parallax.

Spitzer has also been extremely useful for observing everything from Solar System scales (such as the enormous infrared dust ring around Saturn) to galactic structures. Comparing images of galaxies observed at visible wavelengths with Spitzer images of the same galaxies at infrared wavelengths has allowed us to probe the structure and composition of galaxies at a new level.

Astronomers have also used Spitzer to explore the evolution of stars. Thanks to its infrared detectors, Spitzer can look through large clouds of dust that are opaque at visible wavelengths, and observe young stellar objects in their birth environments. Cosmologists can use Spitzer to study the early universe and the formation of galaxies over twelve billion years ago. Fazio used all of these examples and more to demonstrate that Spitzer has truly changed our understanding of the universe.

Every astronomer at #aas227 wants to learn about climate change! WOW this room is ridiculously full. pic.twitter.com/ud9an0gLJG

The second half of the session was a presentation by Doug Duncan featuring an activity from his 101-level college course. He uses climate change as a way to teach critical thinking and scientific reasoning. Members of the audience were walked through an exercise that included interpreting plots of changing surface temperatures, think-pair-share style “clicker” questions, and comparing excerpts from scientific articles and the media. Eventually, students discover that the Earth’s overall temperature is going up, but observations can vary from year to year because heat is moving between the atmosphere and the oceans.

Today’s afternoon press conference was an exciting assortment of results, difficult to categorize under a single umbrella.

First up was Marco Ajello (Clemson University), who spoke about 2FHL, the second Fermi-LAT catalog of high-energy sources. LAT stands for Large Area Telescope, an instrument on board the Fermi gamma-ray space observatory that scans the entire sky every three hours. Ajello described the contents of the 2FHL catalog: 360 gamma-ray sources, of which 75% are blazars (distant galactic nuclei with jets pointed toward us), 11% are sources within the galaxy, and the remaining 14% are unknown. With this catalog, Fermi has expanded into higher energies than ever before, providing the first map of the 50 GeV – 2 TeV sky. Here’s the press release.

O’Meara: I’m a lowly spectroscopist so I don’t have fun pictures to show you, just squiggly lines. #aas227

Next to speak, John O’Meara (St. Michael’s College) told us about the discovery of a gas cloud that may be a remnant from the first population of stars. O’Meara showed us the emission spectrum from a distant quasar, which displays abrupt absorption by a cloud of gas located at a redshift of z~3.5. Absorption by gas clouds is not unusual — but what is unusual is that this cloud is extremely metal-poor, with only 1/2500th solar metallicity. This is the lowest heavy-element content ever measured, and a sign that the cloud might have been enriched by Population III stars — the theoretical first population of stars, which were born when gas in the universe was still pristine. Here’s the press release. 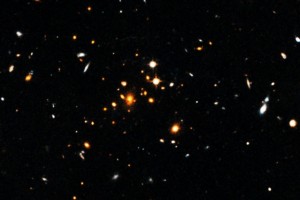 Mark Brodwin (University of Missouri, Kansas City) was up next, discussing the most distant massive galaxy cluster that has ever been discovered. The cluster IDCS J1426.5+3508, weighing in at several trillion solar masses (as measured by three independent techniques!), is located at a redshift of z=1.75. Since clusters take several billion years to form, and its redshift corresponds to a time when the universe was only 3.8 billion years old, we’re probably seeing it at a very early age. This combination of mass and youth is unique! Brodwin also pointed out another interesting feature: the cluster’s core isn’t centered, which means it probably underwent a major merger with another cluster within the last 500 million years. Here’s the press release.

The final speaker was Sukanya Chakrabarti (Rochester Institute of Technology), who gave a very interesting talk about a topic I’d never heard of: “galactoseismology.” Galactoseismology involves observing waves in the disk of a galaxy to learn about the properties of dwarf galaxies that caused the perturbations. In this case, Chakrabarti evaluated ripples in the outer disk of our galaxy, and used these to predict the location of a dwarf galaxy that must have skimmed the outskirts of our galaxy a few hundred million years ago, causing the waves. This is a cool technique for learning about dwarf galaxies whether or not they’re visible, since they’ll cause ripples even if they’re dominated by dark matter. Chakrabarti showed an awesome simulation of this dwarf’s interaction with the Milky Way, which you can check out on her website. Here’s the press release.