Sometimes the hardest things to find are the ones that are the brightest.  Yes, you read that right.  Turns out, big, bright galaxies are pretty rare; there tend to be many more smaller, dimmer galaxies.  So what do you do if you want to find bright galaxies?

The Brightest of the Reionizing Galaxies survey (BoRG) was designed to look for these intrinsically bright galaxies in the early universe.  The galaxies they are targeting are about ten times brighter than the Milky Way.  Currently, the survey is looking at redshift of z=9-10 (about 700 million years after the Big Bang).  The survey relies on the Hubble Space Telescope in ‘multitasking mode’.  While Hubble is off acquiring the spectrum of some target, the BoRG survey snaps a random image several arcminutes away from the direction of the primary target with a wide field camera.  This is good for Hubble as they get twice as much science out, and it’s good for the BoRG survey as well.  At high redshifts, galaxies tend to be highly clustered, so by taking images at random pointings, you can reduce any bias you might otherwise get due to clustering.  So far, the survey has acquired images for 120 of these pointings with each of the five filters, which is about 25% of the authors’ whole proposed survey.

To identify which of the galaxies are actually in the desired redshift range z=9-10, the survey uses the Lyman break dropout technique—or as it’s known in some circles, the vanishing galaxy act.  Lucky for us, galaxies contain a lot of neutral hydrogen gas.  The hydrogen, when excited by stars, emits at a bunch of wavelengths known as the Lyman series, none of which are shorter than 912 angstroms in the rest frame.  This means that when you’re looking at a galaxy’s spectrum, there is a cutoff at 912 angstroms, beyond which there is no more light from the galaxy.  At high redshifts, this wavelength is shifted into the infrared range.  By taking images at wavelengths shorter and longer than this cutoff, you can play peak-a-boo with the galaxy.  Which is exactly what the BoRG survey did.  They chose their filters to match this break so they could compare images to see if the galaxy disappears.  Two disappearing galaxies are shown in Figure 1.

Figure 1. Now you see me, now you don’t. The galaxy, at the centre of each image shows up brightly in the F160W filter circled on the far right, but is completely invisible at shorter wavelengths, such as F125W. The rows show two different candidate galaxies, each centered at the middle of the image. The graph to the right shows the probability that the galaxy is at a given redshift. The top galaxy is most probably at z=10 and the lower one at z=10.5. 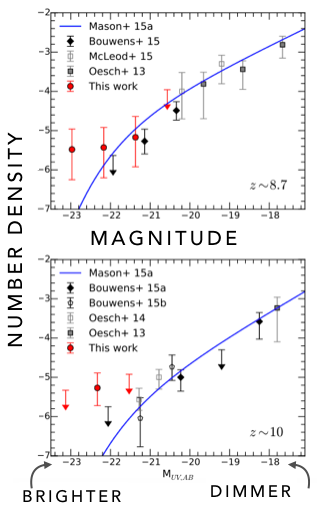 Figure 2. Luminosity functions with new data from the BoRG[z9-10] survey shown in red. The top plot is for a redshift z ~ 9 and the bottom for a redshift z ~ 10.  Notice how there are more bright galaxies (red dots) than expected (blue line) at the brightest magnitudes (left side). However, these results are only preliminary and only once the whole survey is completed can any real conclusions be made.

Finding these bright galaxies is not only important in terms of their discovery, but also to get a better picture of the early universe.  Observations of these galaxies can be combined with observations of dimmer galaxies at similar redshifts to create a luminosity function, which can tell us how much mass different galaxies contribute to the total mass of all the galaxies.  The new results from this survey are shown in red in Figure 2.  From the preliminary results, it looks like there is a more gradual tail to the luminosity function for bright galaxies than previously expected.  However, the survey is only 1/4 done and it would be hasty to jump to conclusions.  Tune back in a few years for the full results from this survey along with other ongoing projects observing high redshift galaxies!