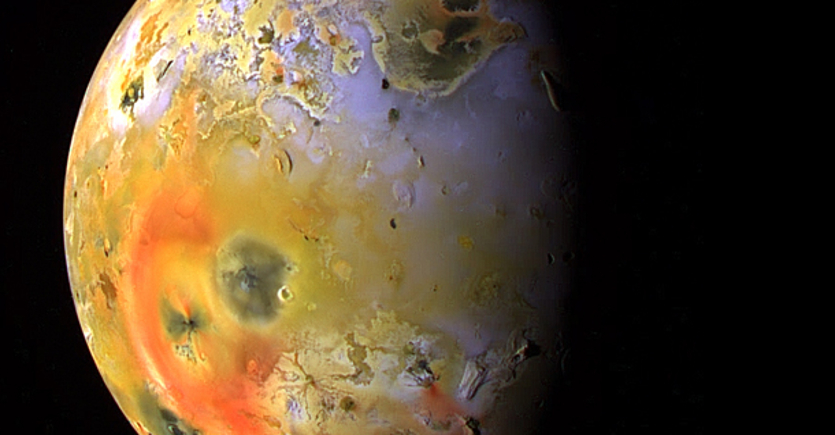 Moons appear to be everywhere in the Solar system. Six out of the eight major planets have at least one, and the two largest gas giants have dozens. Astronomers expect that the thousands of exoplanets discovered in recent years are no different, with most of them hosting their own system of mini-worlds.

However, despite several years of searching, we’ve yet to find an “exomoon”. This isn’t really surprising, as discovering exoplanets themselves took a step change in the capabilities of astronomical equipment, and confirming an exoplanet is still by no means routine. Exomoons, which by definition are smaller than their host planets, are even harder to detect. Many techniques have been suggested, such as looking for changes in the shape of the transit of a planet in front of its star, or finding strange patterns in exo-planetary rings, but so far no method has borne fruit.

The authors of today’s paper suggest a new way to find them. Instead of the optical telescopes favoured by exoplanet searches, Noyola et al. turn to the giant radio telescopes. They suggest that they could be able to detect signals from extrasolar equivalents of one of the Solar system’s most extreme  objects: Jupiter’s moon, Io.

Similar in size to Earth’s moon, Io is the closest of the four Galilean satellites to Jupiter. The gravitational interactions between Io, Jupiter, and the neighbouring moon Europa squeeze and heat up Io’s interior, making it the most volcanically active object in the Solar system.

Io isn’t the only moon that does this. Similar, albeit weaker, emissions are produced by several other moons of both Jupiter and Saturn. Based on this commonality, the authors suggest that radio emissions from exomoons may be common and detectable.

Could we detect an exo-Io? The authors start by calculating the signal from Io were it one light year away. They find a signal of 0.0027 Janskys, which is faint, but well within the capabilities of current telescopes. Of course, most exoplanet systems are tens to hundreds of light years away. The authors point out that the bias in exoplanet detection methods towards giant planets works in their favour, as the maximum theoretical sizes of moon, magnetic field and radio emission all scale with the mass of the host planet.  Such emission would also vary as the exomoon travelled around its host, revealing the moon’s orbital period. 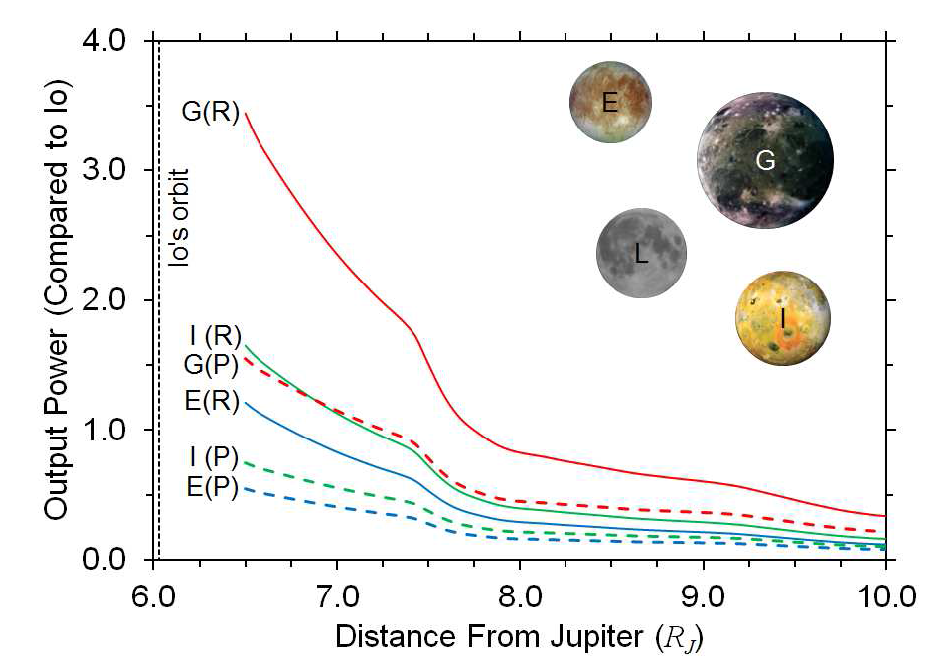 Relative power output from different possible exomoons. The bigger the moon, and the closer it is to its host, the larger the radio signal. The authors use three of Jupiter’s moons to demonstrate this: Europa (E), Io (I) and Ganymede (G) . Moons orbiting backwards, or retrograde, relative to the spin of the planet (R) would also have larger emission than those going prograde (P).

With the method established, the authors go on to suggest that it might be possible to find multiple exomoons with this technique. The large signal from Io is a result of the material produced by its volcanic activity. Moons which are further out experience less tidal force and therefore less volcanism, so the radio signals are much smaller. However, the authors suggest that an Io-like exomoon (an exo-Io) could “donate” material to a nearby moon, should they be close enough together.

This would work via simple orbital mechanics. Volcanoes facing in the direction of the exo-Io’s motion would give the material they ejected a boost, sending it into a higher orbit. There, it could run into the next moon out and be gravitationally captured. The outer moon could then start its own interactions with the host planet’s magnetosphere. As the orbital period of the outer moon is longer, the resulting radio emission would vary on a different time scale to the initial exo-Io, allowing the two signals to be distinguished.

The authors show that this detection method would have uses beyond just finding multiple exomoons. The orbital periods of two moons can be used to find either the mass or radius of the host planet, which may unobtainable via more traditional techniques. Further more, two moons allows the masses of the moons themselves to be found. A complete picture of the system could be built up, just from radio emissions.

The race is on to find an exomoon. As the authors conclude here, the first detection might just be made with a radio telescope.