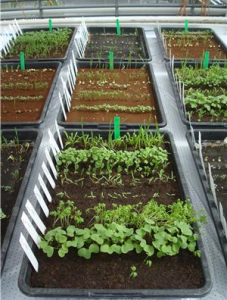 Plants grown by the Dutch team in Martian, Lunar and Earth soils.

Last fall, Dr. Wamelink and his team harvested tomatoes, peas, radishes, and other edibles for the first time from their gardens in the Netherlands.  Cultivating vegetables is not a new concept, but the Dutch team grew food for the first time in a new way — in Martian and lunar synthesized soil.  As our civilization gets closer to developing the technology to travel to distant worlds and dreams of settling new planets, being able to cultivate fresh fruits and vegetables in alien soils would be a huge step in making life on a new planet sustainable.  At Wageningen University and Research Centre, researchers led by Dr. Wamelink, have been working hard to develop the best methods of growing food for future space explorers.

If you’ve ever grown a garden here on Earth, you know it’s a fairly simple process.  Bury a few seeds in the soil, water occasionally, let the plants do their own thing, and reap the benefits at the end of the season.  It’s only easy, though, because plants here have evolved to take advantage of our soil.  If you’ve ever tried to grow plants in poor soil, though, you may know it’s much more difficult.  Just like you and me, plants need certain minerals to grow.  For example, almost every plant species needs nitrogen in order to grow healthy.  However, other minerals, such as aluminum and chromium, can kill plants.  If we want to grow food on other planets, we need to be able to develop soils with the right minerals.  Reactive nitrogen (NO3 and NH4 , i.e. nitrogen that’s good for growing things) is continually replenished in Earth’s soil thanks to recycled organic matter and nitrogen-fixing bacteria.  However, Mars doesn’t yet have any organic matter or bacteria (that we are aware of), which could make growing Earth-veggies difficult.  Lunar and Martian expeditions have taken soil samples on the moon and Mars and from these we know the compositions of the soils on these worlds.  Both Martian and Lunar soils are generally similar to mineral poor Earth soil, although both contain traces of ammonium and Martian soil has a significant amount of carbon.  To simulate growing food on Mars and the moon, the researchers used soil designed by NASA to simulate the alien soils.  The Martian soil was mimicked by using volcanic soil from Hawaii.  A control experiment used soil from the Rhine that was tested to be free of any organic material and nutrient poor. 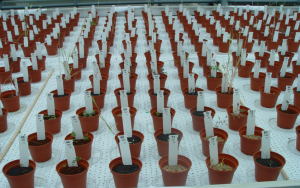 Cultivating the first round of plants.

The first experiment began in April 2013 and spanned 50 days.  Fourteen different plant varieties were planted in each of the three soil types.  Species were chosen that had small seeds so that the plant would quickly run out of its own nutrients and be dependent on what it could get from the soil.  Six of the plants were types that grow wild in the Netherlands and only four were crop vegetables.  All of the plants germinated except common vetch in lunar soil.  However, only three species produced flowers and only two went to seed.  Interestingly, the Martian soil did the best, even beating Earth soil.  The researchers suspected this was because they used very coarse, nutrient poor Earth soil, not the kind you’d get at the Gardening Center.  The Martian soil also held water better, a quality that was suspected to boost its performance. 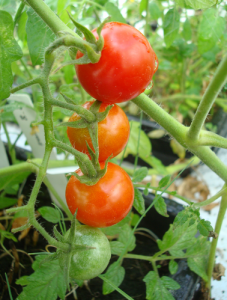 Two years later, in April 2015, Dr. Wamelink and his team began another round of experimentation, planting ten different crops (tomato, rye, radish, pea, leek, spinach, garden rocket, cress, quinoa, and chives).  They recently announced their results in a news release.   In this round, they germinated the seeds in trays, instead of individual pots as they had first done, to help retain more water.  They also added fresh cut grass to the mix to help provide extra nutrients.   This time the plants flourished and vegetables were harvested in October.  The total plant products produced from the Martian soil was almost the same as the Earth control, which Dr. Wamelink notes, “was a real surprise to us.  It shows that the Mars soil simulate has great potential when properly prepared and watered.”

However, if you’re ready to serve up Martian tomatoes and moon peas at your next dinner party, you’ll still have to wait. The edible crops that were harvested from the experiment were not eaten.  Since the soil simulants contain heavy metals including lead, arsenic, and mercury, tests need to be done on the plants first to make sure they are food safe.  New experiments starting next month will focus on potatoes and beans, which will hopefully prove safe to eat.