The Tale of the Moon and the Earth

You probably don’t go to sleep every night counting your lucky stars that the Moon formed. Yet, some scientists have suggested that without the Moon, life may have never formed. Despite the fact that the moon is only 1/80th the mass of the Earth, it actually plays a huge role in stabilizing Earth’s rotation axis. Earth’s orbital tilt is 23.5 degrees with respect to the ecliptic plane and conservation of momentum tells us that unless it is acted upon by an unbalanced torque, it will continue on having that specific tilt. The problem is that Earth is not a perfect sphere. Its diameter is larger at the equator and its mass is not distributed evenly throughout its total volume. It turns out that without the Moon’s constant gravitational pull, the Earth would undergo changes in its orbital tilt angle of up to 90 degrees and therefore have major climatic variations. These variations would make it difficult for life to form.

Despite the Moon’s crucial role in the habitability on Earth we still don’t have a clear picture of how it formed. The canonical story is that the planets were born from a large disk of dust and rocks that surrounded the Sun, called the proto-planetary disk. Like a snowball rolling down a hill accumulating mass, the 8 planets were able to accumulate enough mass to develop into planets. Several other bodies though, called proto-planets, were not able to accumulate enough mass to develop into larger planets. One of these proto-planets is thought to have had a massive collision with the Earth about 10 million years after the birth of the Solar System. After its collision, the debris got trapped in a gravitational orbit around the Earth, eventually forming the Moon. This proto-planet was named Theia or the mother of the Moon.

The long standing problem with this hypothesis is that in order to create an iron-poor Moon and simultaneously create the orbital relationship Earth and the Moon have today, Theia would’ve had to hit at a glancing angle. If that were the case, there would have been little transfer of material from Theia to the Moon and vice versa. Therefore, the Moon would’ve ended up with a composition that was entirely different from that of the Earth. Previous studies that have tried to compare the composition of both the Earth and the Moon have come up with conflicting results on this matter. Today’s bite produce their own measurement of the composition of the Moon and create a model to support their measurements in an attempt to close some doors on this long standing mystery.

But how do we measure the Moon’s composition?

The phrase “composition of the Moon” is, in fact, a bit misleading. Instead of doing a full molecular compositional analysis, as the phrase suggests, the authors measured the relative concentration of oxygen isotopes. Isotopes are forms of elements with the same atomic number but different numbers of neutrons and therefore, different masses. Oxygen-16 (16O), for example has 8 protons and 8 neutrons while Oxygen-18 (18O) has 8 protons and 10 neutrons. The relative amount of 18O to 16O (18O/16O or δ18O) in water, rock, planets, humans, etc. is a function of climate and environment. Planets in our Solar System each have a unique oxygen isotope signature that is represented by: Δ17O, or the difference in 17O/16O relative to 18O/16O. A positive value of Δ17O means that the sample is enriched in 17O relative to Earth, while a negative value means that the sample is depleted in 17O. For example, Mars has a Δ17O value of +0.3‰ and is slightly enriched in 17O. The authors use oxygen isotopes to determine whether or not Earth and the Moon were made from the same reservoir of material.

Results and what this means for the formation of the Moon 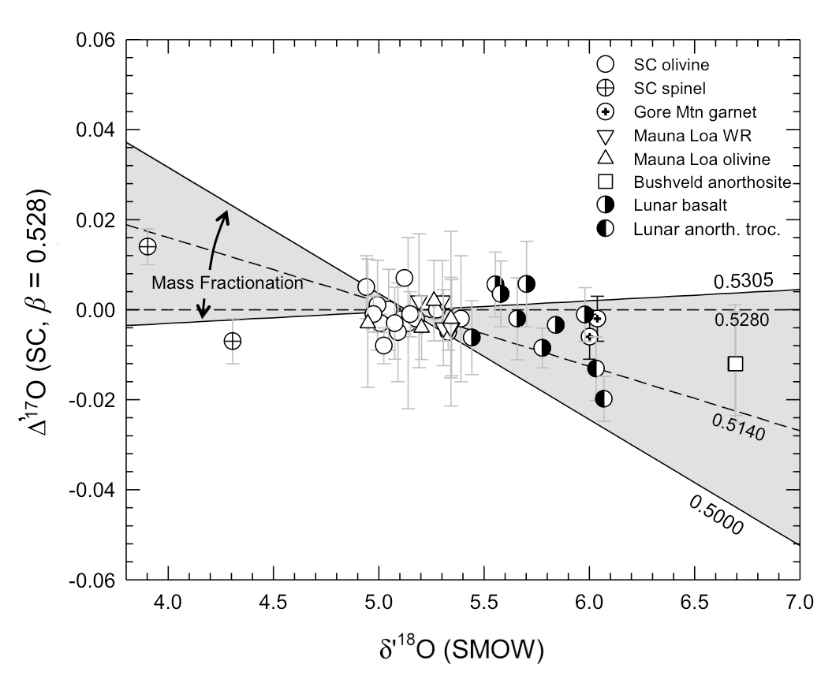 Fig 1. This shows the isotopic ratio for each of the samples collected in the study. The grey region indicates the range for which samples could’ve come from the same oxygen isotope reservoir. The half colored dots are the Lunar samples and the clear dots are the Earth samples. Because all the samples lie in this region, we know that the Moon and the Earth were formed from the same reservoir.

In order to get a comprehensive look at what the Moon’s Δ17O value is, the authors analyzed seven Apollo 12, 15, and 17 samples and one lunar meteorite and compared it to a suite of terrestrial igneous rock samples. Figure 1, above, shows all of their samples plotted on a diagram. Any points that lie inside the grey region are predicted to come from the same oxygen isotope reservoir. They found that the oxygen isotope reservoirs are indistinguishable with a difference in Δ17O of 5 parts in one million level of uncertainty. This would indicate that the Moon and Earth are formed from the same exact material.

Remember that this doesn’t exactly fit the canonical, “grazing impact” hypothesis. In that case, Earth and the Moon would have had vastly different compositions due to little mixing of material upon collision. The authors sought out to create their own Moon formation model in order to form a competing hypothesis to this one. In order for their model to match their data, the Moon and Earth must have collided to the point that their material was thoroughly mixed in a violent collision. Not only does this result have important implications for the formation of the Moon, it also provides constraints for what may have occurred following this giant impact.

We all know that today, Earth is filled with liquid water. How did we get this water? Earth started out with a molten surface and would have surely been dry upon formation. The long standing theory is that after the Earth formed, water-rich comets and asteroids collided with Earth, bringing us our oceans. Knowing that the Earth and Moon started out with the same oxygen isotope ratios can actually give us constraints on what the oxygen isotope ratios of those late impactors may have been. The authors find that they must have had a Δ17O value of +1‰ suggested that they were in fact, water rich. Meaning, not only does their data provide clues to how the Moon form, it also gives us clues as to how Earth got it’s water.

Despite the insights that this bite provided into the formation and development of the Earth-Moon system there still seems to be some unanswered questions. If the Earth and Moon did have a violent head on collision, how did the Moon end up where it sits today? What was the time scale for these post collisional comets and asteroids? Unfortunately those questions are outside the scope of today’s bite, but having a definitive answer to what the composition of the Earth and Moon were upon formation is one question that can finally be put to rest.