Cosmic rays are the highest-energy naturally occurring particles in the universe. Their energies can approach orders of magnitude higher than anything the Large Hadron Collider can produce!  Although these particles (including protons and the nuclei of helium, iron, and nitrogen) were discovered in the early 1900s, there are still many unanswered questions about where they come from, how they get accelerated to such high energies, and their mass composition.  Today’s paper studies the mass composition of cosmic rays in the energy range of 1017 to 1017.5 eV.  Cosmic rays at these energies are thought to come from inside our galaxy.

When a cosmic ray hits the Earth’s atmosphere, it interacts with the air molecules in the atmosphere and creates a cascade of particles known as an air shower.  This shower gets bigger and bigger, with the total energy of the primary cosmic ray split between all the particles that are created.  Eventually the secondary particles do not have enough energy for the shower to keep growing; it begins to shrink and die out at this point.  The air shower is accompanied by radiation that can be detected at radio wavelengths, partially created by electrons and positrons accelerating in the geomagnetic field (see this paper for an in-depth discussion of the physics involved).  This radio emission changes as the shower grows and dies out, making it sensitive to a quantity known as Xmax.  Xmax (also called the atmospheric depth at shower maximum) is the column density of the atmosphere over the full path the particle travels.  Different species of cosmic rays will have different values of Xmax. 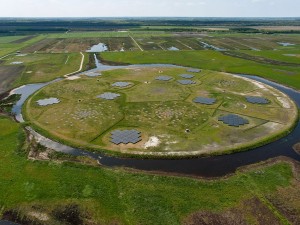 All the data for this analysis was taken using the Low Frequency Array (LOFAR), a radio telescope that looks quite different from what one typically envisions when they hear the word “telescope”.  It consists of thousands of antennas.  Most of them are located in the Netherlands, although there are a few stations in other European countries, creating a very large collecting area.  Signals from individual antennas are digitized and combined before analysis begins. 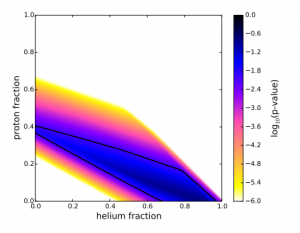 The LOFAR Collaboration measured Xmax and found it consistent with measurements from other, non-radio experiments.  They then used the expected values of Xmax for different cosmic ray species from Monte Carlo simulations and found the best fit to the data came from a four-component model with proton, helium, nitrogen, and iron cosmic rays.  The first two of those are much lighter and are therefore known as the “light-mass component”.  They found that the best fit allowed within systematic uncertainties gives a light-mass fraction of cosmic rays of somewhere between 38% and 98%.

This is interesting because we know from cosmic ray theories that in the energy range they studied, galactic sources should dominate over extragalactic ones.  The mass composition of the main galactic component of the cosmic rays (CRs from supernova remnants) is expected to be heavier.  Therefore, this lighter mass-component must come from a second source of galactic cosmic rays.  Possibilities include a class of extremely energetic sources (such as Wolf-Rayet stars exploding), past galactic gamma-ray bursts, or a re-acceleration of the main, original component of galactic cosmic rays.

The origin of Galactic cosmic rays