The alien looked up at the night sky. Not that it was easy to tell the difference between day and night, with all those bright nearby stars in the globular cluster. She looked over to a nearby star a mere 2 light-weeks away where her family was waiting for her – and she wondered what her family might think of a trip to one of the planets on the outer edges of the cluster…

Back to Earth… Where the nearest neighbouring star is not light-weeks by several light-years away!
The authors of today’s astrobite consider the possibility that life, and even advanced civilizations, could develop in globular clusters. These star groups are among the most ancient bound systems in the Universe, containing between about a hundred thousand and over a million stars in close proximity to each other. Due to their large ages – the globular clusters around the Milky Way have been found to be more than 10 billion years old with some only marginally younger than the Universe itself – the stars in them are of low mass and burn steadily over the course of billions or even trillions of years. 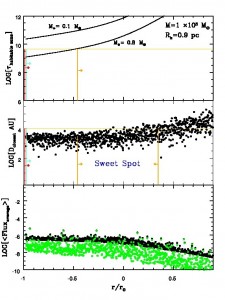 Figure 1: The top panel indicates the orbital lifetime of a habitable-zone planet as a function of the concentration of stars in the cluster. This lifetime depends on the stellar masses (this plot shows both 0.1 and 0.8 solar masses). A vertical line is plotted corresponding to a survival time roughly equal to the current age of the Earth. The middle plot shows the distance to the closest neighbouring star against the concentration of stars. The region marked “sweet spot” indicates where a planet could survive in orbit around its host star, while also having nearby stars which are less than a few light-months away. The bottom panel shows the amount of total energy received on the planet (black dots), as well as the contribution due to the nearest star (green dots).

Habitable Zones in Globular Clusters – or: “Can we take a trip to the cluster rim?”

In establishing whether life could support itself on a given planet, researchers use the concept of a “habitable zone“. This term indicates a regions around a star in which Earth-like planets could sustain liquid water on their surfaces.
Similarly, the authors of this paper suggest that a globular cluster has a habitable zone, or “sweet spot” (see Figure 1). Two competing factors have to be weighed off: if the planet’s orbit is too far from its host star, it is more likely to be ripped out of its solar system through interaction with a passing neighbouring star. On the other hand, a civilization is more likely to be able to survive if it can spread to other planets, suggesting that for any civilization to become advanced it is necessary for it to be able to establish interstellar travel to nearby stars. Hence a balance has to be found where the habitable-zone orbits are stable without being disrupted by nearby stars, and yet the density of stars is such that the nearest star is not too far away and interstellar travel takes little time. Thus the ideal place for civilizations to grow is in the outer parts of the cluster where stars aren’t too concentrated and yet separated by less than about ten-thousand astronomical units (an astronomical unit is the average distance between the Earth and the Sun), or about two light-months.

Floating Freely
Another interesting possibility to consider is the fate of life-harbouring planets which have been indeed been kicked out of its solar system, for example by interacting with a passing stellar neighbour. Since it is the outermost planets in a stellar system that are most at risk to the gravitational pull from another nearby star, any civilization on these planets would already have had to be accustomed to receiving only a small amount of stellar light. The authors argue that is might be possible for such a civilization to survive the expulsion if they can devise ways to shield themselves from harmful impacts and radiation, and develop energy sources which don’t rely on nearby stars.

The Drake Equation – or: “Anybody out there?”
Having suggested that globular clusters might be ideal places for life to arise and evolve, the authors perform a “back-of-the-envelope” calculation to guess the likelihood of such civilizations. They make use of the Drake equation which identifies several factors to “determine the number of communicating civilizations in existence in the Galaxy at a typical time.” Estimating this number involves investigating terms such as the total number of stars, the fraction of stars which has planets, the average number of planets per star, the fraction of planets on which life develops and the fraction of these which become intelligent, and the fraction of these which start to try communicating with other civilizations.

Searching for Extraterrestrial Life
The authors indicate that globular clusters might be the ideal environments for life to have developed – and hence suggest that our search for alien life, commonly known as SETI (Search for ExtraTerrestrial Intelligence), would best be focused on these places. Since stars are relatively stable, life would have plenty of time to develop on an orbiting planet. Even if one attempt didn’t succeed, there might well have been multiple opportunities over the course of the past 12 billion years. Additionally, “reset” events like nearby gamma-ray bursts or supernovae, which might destroy any fledgling lifeforms, are thought to be very uncommon in globular clusters, compared to how often they occur in the disk of the Galaxy. Hence, the authors argue, it should be more likely to find lifeforms and advanced civilizations in globular clusters. By looking at typical numbers of stars in the globular clusters around the Milky Way, the authors suggest that many of them “could presently host advanced civilizations that have spread throughout the cluster.” They further suggest that if such advanced civilizations do exist in the clusters, “they will tend to be old civilizations.” Even if only every tenth cluster star has life-supporting planets, and if only 1% of those hosts intelligent life, and if only 1% of those is able to set up communications – then even with these small probabilities,  “could be enough to ensure that every globular cluster hosts a long-lived communicating civilization.”

Actually detecting these civilizations using SETI will however be more difficult: since globular clusters are very crowded with dim stars, it is very difficult to detect planets through conventional methods, such as the the transit method where the planet briefly eclipses its host star, or the radial velocity one where the “wobble” of a star is detected as the orbiting planet pulls at it. So far only one exoplanet has been detected with these methods, but the authors are confident that there should be many more exoplanets within these intriguing environments.

The alien continued to observe the night sky. She felt a certain sense of peace whenever she looked at the mass of brilliant spots surrounding her – like many generations before her, she had grown up with stories of the first settler to this or that planet, as well as occasional stories about the demise of certain planets hit by meteors or other catastrophic events. Having established a multitude of self-sustaining outposts, however, had given her species a far greater chance to survive. By making the jump across interstellar space, she was certain that hers, like other civilizations in the cluster, could, in a sense, become immortal…