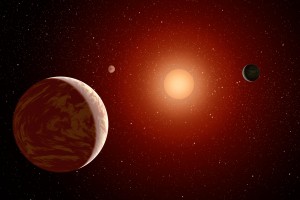 Let’s be honest for a second. The search for planets in the galaxy is about the search for life. It is awesome that we’re learning about thousands of other planetary systems. We’re making discoveries – some surprising, some reassuring – about the nature and evolution of the universe. This is great. But one look at the hyperbolic headlines about Earth-like planets and Earth twins reveals why, in the hearts and minds of the public, and maybe of a lot of researchers, the search for planets is the search for potential homes for life.

In that case, our understanding of exoplanets is about finding promising candidates so that, once we have the means to look for evidence of life, we’ll have a shortlist.

Habitability means more than just Earth-likeness, but even Earth-likeness itself is tremendously complicated. A rocky planet about our distance from a Sun-like star isn’t necessarily habitable. Atmosphere, tectonic activity, moons, chemical composition, and solar system make-up all play a part. And maybe Earth-likeness isn’t even ideal. A recent astrobite explored the criteria for habitability, discussing a paper that proposed conditions and characteristics that would render some not-quite-Earth-like planets super-habitable.

Today’s paper looks in-depth at one way that a planet without some of Earth’s conditions for habitability could still be habitable through other means. Our current planet-finding methods make it much easier to find planets in close orbits to their stars. (Shorter orbital periods and easier-to-spot transits are the two main reasons.) However, Earth-sized planets orbiting that close to sun-like stars are too close to their stars to be habitable. To make things easier on everyone, the authors suggest paying special attention to planets around low-mass stars, where the habitable zone is much closer to the star.

The challenge to habitability around low-mass stars, though, is that low-mass stars have much longer lifespans than more massive stars, and so many of their planets may be very old. Old planets are likely to have lost much of their internal heat, the energy which, as on Earth, drives plate tectonics. Plate tectonics on Earth are important to life because they maintain the carbon cycle – trapping carbon when there is too much of it in the atmosphere, releasing it when there is not enough – which helps moderate the greenhouse effect. A planet even twice Earth’s age is likely to have cooled enough to halt this process. Even if it once was habitable, it likely no longer is.

How to heat a planet

Unless, that is, there is another heat source. Friction from tidal forces could heat a planet’s interior, but the conditions that give rise to tidal heating – rotation that’s out of synch with a planet’s orbit, or an eccentric orbit – will work themselves out very early in a planet’s lifetime, on timescales as brief as a thousand years. 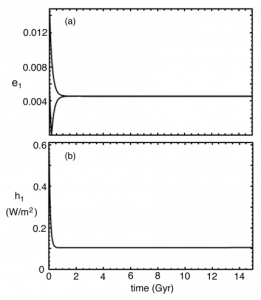 In this paper, the authors propose that another planet orbiting farther out from the tidally heated planet could exert enough of a gravitational pull to keep the inner planet’s orbit from settling into circularity. The inner planet instead settles into a stable eccentric orbit, making tidal heating a long-term effect (see Figure 2). The interactions between the two planets are described in two phases, one in which the planets’ eccentricities oscillate, and a second, longer phase, in which the eccentricities settle into nearly fixed values. In order for the inner planet to be habitable through this process, the second phase must last long enough to sustain life, and the first phase has to be mild enough that the initial tidal heating doesn’t sterilize or incinerate the planet.

The authors used a model with a star one tenth the mass of the sun and an Earth-style planet (in size, mass, and estimated susceptibility to tidal heating) orbiting in that star’s habitable zone (at 0.034 AU). They tested a range of combinations of mass and distance for the outer planet, as well as several patterns of orbit and eccentricity. They found that the tidal heating of the inner planet would often be moderate enough and long-lasting enough to provide the heat and tectonic activity believed to be necessary for a planet to support life.

In some cases, due to the extraordinary lifespans of low-mass stars – up to ten trillion years – planets orbiting in these stars’ habitable zones could be, the authors suggest, “the longest-lived surface habitable in the universe.” (The extremely long-term stability of a planet’s position in the habitable zone is questionable because of orbital decay.) The Earth will only support life for a few billion years more. Humanity may someday seek a new long-term home planet, and the authors speculate that we may migrate to one of these tidally heated planets around a low-mass star. Stars like these could even already be colonized by space-faring civilizations. SETI, get your radio telescopes ready.

But even without an extraterrestrial signal, and long before humanity needs an off-world home, these findings expand the possibilities for habitability on other worlds. The longer the list of habitability criteria gets, the less optimistic the search for life elsewhere can feel: habitable zone, small but not too small, rocky and wet, just the right level of greenhouse insulation in the atmosphere, just the right orbital eccentricity, plate tectonics, a stabilizing moon, maybe a Jupiter farther out to deflect and absorb comets. On and on, the odds seem to dwindle. It’s heartening, then, as this paper suggests, that there may be more than one path to finding life a suitable home.