Carl Sagan famously said that “we are all made of starstuff”, alluding to the fact that the oxygen in the air we breathe, the calcium in our bones, and the iron in our blood were all created in the fusion furnace of a massive star and that star’s subsequent supernova explosion. This material is then dispersed through the cosmos, enriching our Universe with the heavy elements required to form planets and life. 4.5 billion years ago Earth was formed from these stellar guts, though nearby supernovae have since continued to shower us with their metal-enriched material.

Yesterday’s astrobite presented some lessons in astrophysical archeology. In a nutshell, samples from the ocean floor have uncovered higher-than-normal concentrations of the isotope iron-60 deposited at different layers, indicating that they were embedded there at different geological times. And the only known mechanism to put them there? You guessed it – supernovae. Based on the amount of iron-60 deposited and the age of the rock in which it is embedded, the studies covered in yesterday’s post were able to estimate aspects of these long-past supernovae such as the time it occurred and the approximate distance to the progenitor star.

Today’s paper takes these studies a step further. A particular layer of iron-60, one dated at 2.2 million years, has been sampled at multiple locations on Earth only to find vastly different abundances. A sample from the southern Indian Ocean had an order of magnitude more iron-60 than a sample near the equator in the Pacific, and no iron-60 at all was detected in a sample off the coast of Iceland. Though some of these measurements are over a decade old and possibly suffer from certain inaccuracies, if these measurements are indeed accurate they indicate that the showers from this ancient supernova were not isotropically spread around Earth. Using this information, Fry et al. attempt to infer where in the sky this blast came from – using Earth itself as a telescope to locate a long-gone supernova that made it rain over 2 million years ago.

Riding a dust grain through the Solar System

Now, you may be wondering how on Earth you could possibly determine the location of a supernova that delivered material to our planet millions of years ago. The dust carrying iron-60 from this supernova had to travel through many regions governed by vastly different physics to get to the bottom of Earth’s ocean, with each of these regions potentially altering its trajectory. First, the shock wave from the supernova carrying the iron-60 enters the heliosphere, becoming susceptible to the Sun’s gravity, magnetic field, and radiation pressure. Next, Earth’s gravity and magnetic field would take hold of the dust. After entering the atmosphere, wind patterns on our planet would disperse the dust further, and once it finally touches down in water there are ocean currents to worry about. In addition, the dust from the supernova is expected to be distributed to Earth over a timescale of about 100,000 years, which means Earth’s 26,000 year axial precession must be taken into account as well as its daily rotation and yearly orbit around the Sun.

Figure 1. The simulated distribution of incoming dust at the top of the atmosphere from a supernova that exploded above the south celestial pole. The stars indicate the actual locations of the three samples, and colors indicate the relative distribution factor at differing latitudes (essentially a measurement of the relative amount of iron-60). Figure 1 from today’s paper.

Surprisingly, simulations found that the incoming trajectory of the dust grains was minutely affected by many of these physical processes, even when size, charge, and incoming speed of the particles were adjusted. Through the interplanetary medium, the dust trajectories were deflected by the Sun’s magnetic field, radiation pressure, and gravity by at most 1 degree. By Earth’s magnetic field the trajectories were only deflected by about 3 arcminutes. Based on these considerations, the authors were able to construct a map of where iron-60 was deposited into Earth’s upper atmosphere based on the location of the supernova in the sky (Figure 1).

However, wind and water currents play a much larger factor in redistributing the material around the Earth, though the problem is slightly simplified by only considering north-south motion (remember – the material is distributed over a time period of 100,000 years so Earth’s rotation already spreads the material in the east-west direction). To add even more parameters into the mix, chemical and biological effects in the atmosphere and ocean also have the ability to alter the iron-60 distribution. With all parts of the journey taken into account, the authors were able to generate simulated amounts of iron-60 that fit the observed values at the three different locations and deduced that the supernova likely occurred in the Tuc-Hor cluster, about 46 lightyears away. However, due primarily to the north-south winds in the atmosphere, much of the information about the dust’s initial trajectory is randomized. This makes precise localization of the supernova impossible using just Earth rocks. If only there were a place we could go that didn’t have these pesky factors altering the voyage…

Show us the moon rocks 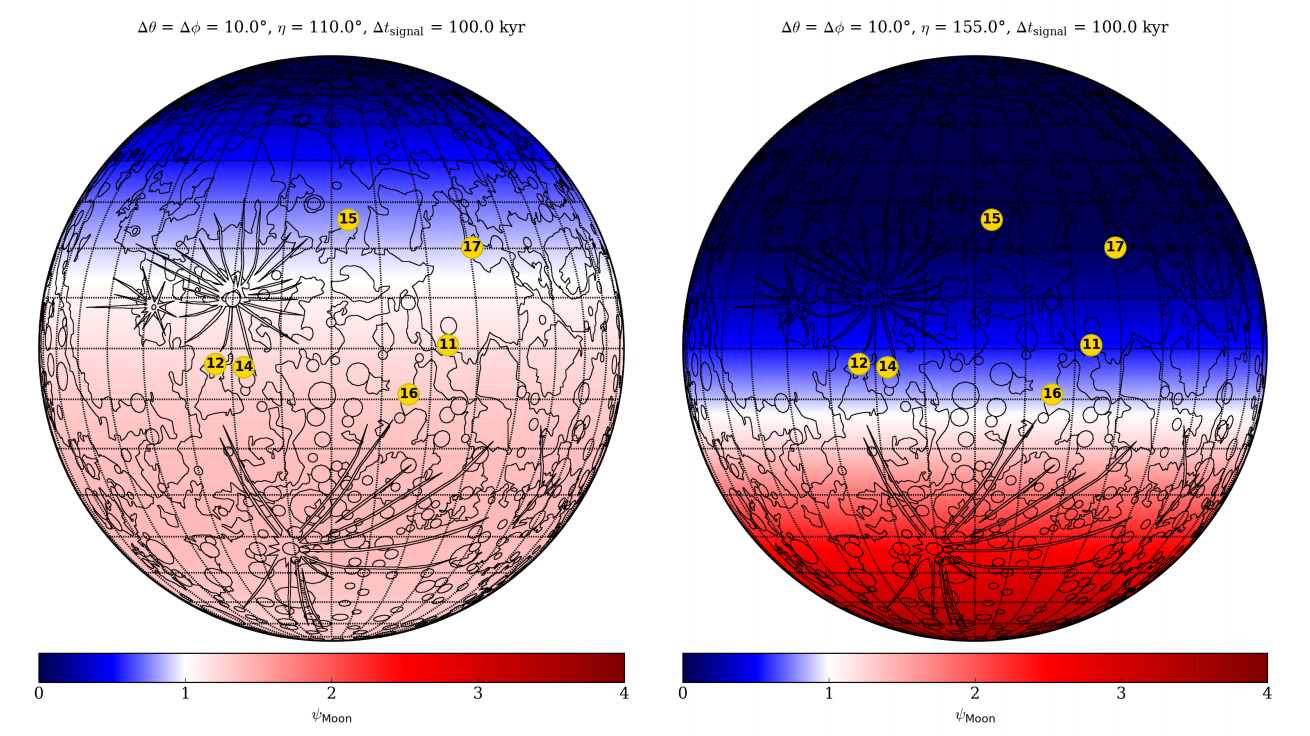 Figure 2. Predicted values of the distribution factor for Lunar samples. The left panel is for material arriving from 20 degrees south latitude (relative to the rotational axis of the moon), which is towards the Sco-Cen association. The right panel is for material arriving at 65 degrees south latitude, corresponding the Tuc-Hor region (which is the region that the authors predicted for the supernova’s origin). The yellow circles represent the landing sights of the Apollo missions that acquired lunar samples. Figure 2 from today’s paper.

There happens to be such a place only 239,000 miles away! Iron-60 deposited into the lunar regolith by such a supernova would not have suffered the effects caused by an atmosphere or ocean, meaning their initial trajectory would be preserved within about 1 degree (this 1 degree was found to be the approximate deflection due to interplanetary effects). If you have really good memory, you might remember that we went to the moon over 43 years ago and brought back over 800 pounds of lunar samples! Though the Apollo landings were at similar lunar latitudes (Figure 2), comparing the iron-60 content of these samples could better constrain the location of the supernova in the sky, and the authors predict that these samples will reveal distinct differences in the abundance of iron-60 at different lunar locations. Collecting more lunar samples from differing latitudes and time periods could help pinpoint more nearby supernova that exploded in the past, though until then we’re stuck with the annoyance of oceans and an atmosphere.