Dust and the Occult

Title: What can the occult do for you?
Authors: B. W. Holwerda, W. C. Keel
First author’s institution: University of Leiden, the Netherlands
Status: Published in the Proceedings IAU Symposium No. 321

Most of us think of dust as the unfortunate substance that is forever collecting on furniture in our homes, something we try to get rid of during half-hearted attempts at spring cleaning. But what seems mundane and annoying here on Earth is one of the most important things that astronomers try to characterize. Sure, dust may not be as explosive as a supernova or as dramatic as a black hole, but every single observation we have of light from astronomical sources at shorter wavelengths, such as UV and optical light, comes to us filtered through the gas and dust spread out through the universe, thereby attenuating the signal. It is therefore really important to understand how this dust affects our observations.

In today’s paper, the authors describe a method to understand how much dust is in a given galaxy and how that affects the light from the object. Picture two occulting, or overlapping, galaxies, one of which is in the foreground and the other in the background, as shown in Figure 1. You can imagine that the light from the galaxy in the background will shine through the galaxy in front, illuminating the dust content and structure of the foreground galaxy. Ideally, the background galaxy is an elliptical galaxy and the foreground a spiral galaxy. The authors have amassed a sample of about 2500 occulting pairs of galaxies collected from the Sloan Digital Sky Survey (SDSS), Galaxy And Mass Assembly (GAMA), and GalaxyZoo in a project called STarlight Absorption Reduction through a Survey of Multiple Occulting Galaxies (STARSMOG). With this sample, they can to begin answer questions such as how far radially does the dust extend in galaxies? How is the dust distributed vertically in a galaxy? Does the amount of extinction of light by the dust change in the outskirts of a galaxy? And finally, does the effect of dust change in the outer regions of a galaxy where there are fewer metals?

Figure 1. An image and schematic showing how overlapping galaxies can give information about dust in the foreground galaxy. The light from the background galaxy (orange) is attenuated by dust in the foreground galaxy (blue). Using the overlapping region in the “Venn diagram” of the two galaxies (black box), the combination of the light from the two occulting galaxies allows for very accurate descriptions of the dust distribution, density, and composition.

One initial result is that the authors have determined that the dust in the outskirts of galaxies extends farther out than the observed visible light would indicate. This remains true for both massive and low mass disks of galaxies. One of the lingering questions is then how that dust came to be so far out in the disk of the galaxy. Continuing research will tell if the dust moved there in some kind of radial flow or if it was formed there originally. 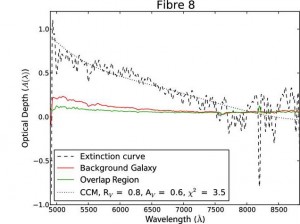 The ongoing STARSMOG program to study occulting galaxies is a Hubble Space Telescope program to continue studying the effects of dust at large radii in galaxies. Astronomers have proposed many different models to describe how the dust in galaxies affects light at different wavelengths.  These models are called attenuation curves, or reddening laws. Initial pilot images were taken by an integral field unit (IFU), which is a type of spectrograph that enables astronomers to see both images and spectra from an object. Figure 2 shows the results from this analysis for a galaxy pair. The attenuation curve derived from these observations can be much more accurately modeled given the data from both galaxies than if only single galaxy observations were available. So while we contemplate the layers of dust on our furniture, some astronomers will be working on STARSMOG to understand the dust in galaxies much more precisely than current capabilities.