In a billion years, Earth will be a desert planet, roasted by an ever brightening Sun.  All life on the surface will be extinct.  Four billion years after that, Earth may be swallowed up by the Sun as it expands into a red giant.  The Goldilocks zone that the Earth currently lives in, where it’s neither too hot nor too cold for liquid water to exist on Earth’ surface, is not a permanent region around the Sun.  Instead, the boundaries of a star’s habitable zone (HZ) evolve as the star does.  As a star in the main sequence (the core hydrogen burning phase) becomes older, it gradually becomes larger and brighter, which pushes the HZ around it farther out.  Once a star begins burning hydrogen in a shell around the core, and then later burning helium, things start changing much more drastically.  It is the HZ at this stage of a star’s life that the authors explored.

The authors of today’s Astrobite create a set of six stars of various spectral types, which are a function of temperature and, for main sequence stars, also mass.  The six spectral types in the paper are M1, K5, G2 (like the Sun), F5, F1, and A5, which correspond to stars with masses between 0.5-1.9 times the mass of the Sun.  They then run these stars through a stellar evolution code to track each star’s properties as it evolves through the red giant branch phase (RGB; hydrogen burning in a shell around an inert core of helium (i.e.,  no fusion in the core)), and, for the more massive stars (the Sun and heavier), then also through the horizontal branch phase (HB; helium burning in the core and hydrogen burning in a shell) and the asymptotic giant branch phase (AGB; hydrogen and helium burning shells around an inert core of carbon and oxygen).  This evolution causes a change in several of the properties of the star, such as its radius and temperature, as well as in how much light it emits at a given energy, a property which is known as the spectral energy distribution of the star. All of these changes affect the HZ boundaries.

When a star evolves off the main sequence phase, it begins to lose a significant amount of mass in the form of strong stellar winds.  This blows material off of the star and affects its future evolution; the lowest mass stars (K5 and M1) lose too much mass to ever progress to the HB and AGB phases.  Stellar mass loss also has an important effect on the planets orbiting it.  As the star loses mass, the planets becomes less gravitationally attracted to the star, and hence they move farther away.  Mass loss from the star also has a direct impact on the mass loss of a planet’s atmosphere since the stellar winds can wear down and erode the atmosphere.

The main results of this paper are the changes of the habitable zone boundaries around the host star as it evolves, which is shown in Figure 1.  The boundaries of the HZs for the smallest stars, M1 and K5, change pretty smoothly in time since they never evolve off the RGB.  More massive stars have much more complex changes to their HZs as they evolve through the different phases.   For the G2-A5 stars, the HZ moves outward as the star moves up the RGB until the star suffers a helium flash, an instantaneous burst of helium fusion lasting only seconds, which drastically shrinks the star and moves the HZ inward.  The HZ then moves outward again during the subsequent AGB phase. 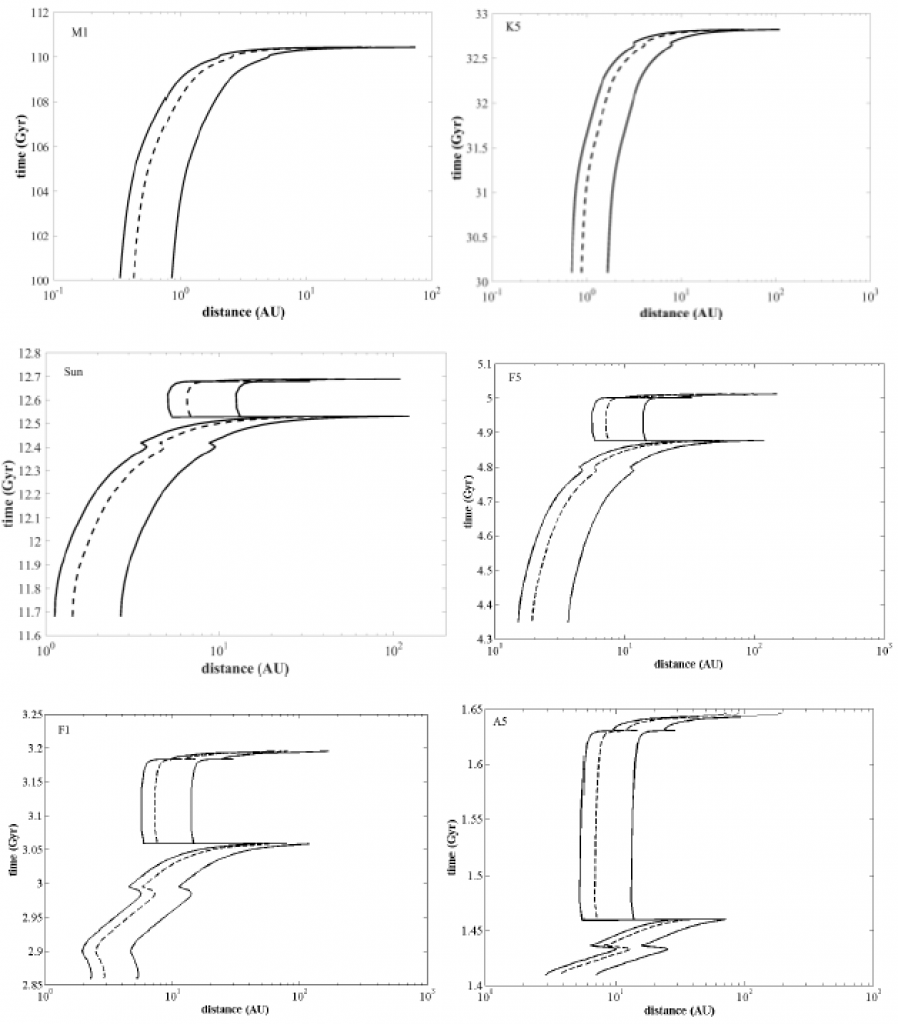 Figure 1: The boundaries of each star’s HZ as it evolves.  The solid lines are the empirical HZs.  The inner boundary is calculated assuming Venus could have had water on its surface until about 1 Gyr ago (1 billion years ago), while the outer boundary is calculated assuming Mars had water up until 3.8 Gyr ago.  The dashed line is an alternate inner HZ boundary based on 3D atmospheric modeling of a runaway greenhouse effect.  Note that scales for the ‘x’ and ‘y’ axes are different for each star.

Our own Sun will start the RGB phase with a HZ between 1.3-3.3 AU (1 AU = 1 Astronomical Unit, which is the current distance from Earth to the Sun).  This balloons to 46-123 AU at its maximum brightness during the RGB phase.  For reference, even Neptune, with an orbital radius of 30 AU, would be too hot for liquid water.  During the HB phase, the HZ shrinks back to 5-13 AU, which lasts for about 160 Myr (million years).  It then balloons out again to 39-110 AU during the AGB phase.

With these shifting HZ boundaries and planets migrating outward, the authors calculated the total length of time a planet could last in the HZ of a post-main sequence star.  For the smallest star (the 0.5 solar mass M1 star), a planet can survive for 9 Gyr in the HZ.  However, the universe isn’t old enough for any M1 or K5 (0.75 solar masses) planets to have evolved onto the RGB.  By contrast, a planet can only remain in the HZ of an 1.9 solar mass A5 star for 200 Myr (during the HB phase).  The Sun lies between these two values at 500 Myr.

What does this mean for the development of life?  On Earth, life first appeared about 500 Myr after the formation of the Sun, which is still in its main sequence phase.  However, it took billions of years for this to become potentially detectable.  While this is only a sample size of one, it appears that life may also be able to form around observable post-main sequence stars, but the chances of it evolving into something detectable are slim to none.