What happens to planets when their host star dies?

Title: The post-main-sequence fate of the HR 8799 planetary system

After using up the hydrogen in their cores, stars with masses below roughly 8 times that of the sun will expand into red giants, blow off their outer layers, and become white dwarfs. This can be a very destructive process for surrounding planets, as they may, for example, be engulfed by the expanding red giant or ejected from the system.

Signatures of heavy metals have been detected in the atmospheres of many white dwarfs, indicating the accretion of planetary material. Such objects are often referred to as polluted white dwarfs. Major planets (like the 8 in our solar system), minor planets (e.g. dwarf planets, asteroids), dust, gas, and metallic debris (from astronomers’ “metals” like carbon to real metals like iron) have all been detected surrounding white dwarfs, so we know that these objects can, at least under certain circumstances, survive a star’s red giant phase. The authors of today’s paper explore how HR 8799 could become one of these polluted white dwarfs, simulating possible futures for the star and its surrounding planets and debris.

HR 8799 is an A-type main sequence star, roughly 30 million years old and 1.5 times the mass of the Sun. It is surrounded by an inner debris disk, an outer debris disk, and four known giant planets in the gap between them (shown in Figure 1). The system is dynamically very interesting, as the four massive planets (2-10 times the mass of Jupiter) are on orbits that are wide around their star (15-70 the size of Earth’s orbit around the Sun) but are relatively close to one another in a way that would typically not be stable. HR 8799 is considered the perfect candidate to become a white dwarf planetary system for a few reasons:

Figure 1: Direct imaging of the HR 8799 planetary system in which the fourth planet (e) was discovered with the Keck II telescope. (Marois et al. 2010)

The system is thought to be stabilized by a mean motion resonance, in which the planets’ orbital periods are all related by small integer ratios. It is unknown whether the planets will remain stable until the star reaches the end of its main sequence, but prior simulations have demonstrated that they could survive in a 8:4:2:1 resonance (which they are approximately in).

The authors of this paper adopt this stable resonance model at the beginning of the star’s main sequence evolution as the starting point for their simulations. They run 70 different N-body simulations to track the motions of the system’s objects as they, and outside perturbers, exert gravitational force on one another for 14 billion years. The primary dangers to this dynamical stability are:

The resonant system remains stable through the star’s full main sequence lifetime in all of the models. However, in none of their scenarios do all four planets remain in the system through to the simulation’s end. In the majority of cases, two of the planets survive (example in Figure 2), and we also see many cases with only one survivor. In some very rare cases, three planets may make it. The majority of these lost planets are ejected from the system, and only on rare occasions (a few percent) do they collide with the star or another planet.

Figure 2: Representative example of simulation results. Left: semi-major axis evolution over time. Right: Pericentre (closest point in orbit to the star) evolution. In this case, all four orbits begin migrating outward during the giant branch phase due to mass loss (GB in the figure, ~3 Gyr), breaking the resonant chain. Very quickly at the end of this phase, planets b (purple) and e (red) are ejected, c (blue) migrates inward, and d (green) migrates out to hundreds of AU. (Figure 3 in the paper)

Most of these remaining planets end up on eccentric (non-circular) orbits. The final semi-major axes and pericentres of all planets which made it to the end of their 14 Gyr simulation are shown in Figure 3. Ultimately, with these surviving giant planets, any remaining debris from the disks is likely to be scattered into the star within 1 Gyr of the star becoming a white dwarf. Thus, HR 8799 might be expected to show metal-pollution in its atmosphere in roughly the first Gyr of its white dwarf cooling phase. 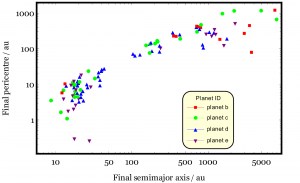 Figure 3: Final semi-major axis and pericentre for all of the planets which survived their entire 14 Gyrs, for all of the simulations. The most massive planet, d, survives the most often. (Figure 9 in the paper)

Ultimately, this system’s starting configuration on the verge of instability results in many different types of perturbations being able to disturb it in many different ways, particularly when considering external forces like stellar flybys and galactic tides. The system’s four large planets, debris disks, and inevitable dynamical activity provide all the needed ingredients to pollute a white dwarf.

The HR 8799 planetary system appears to be quite unique though, given its four high mass planets. Other work by the first author has shown that lower mass planets are more likely to be ripped apart and devoured by their stars than planets like HR 8799’s. These smaller planets also take longer to scatter debris toward the star, so their white dwarf pollution period should last multiple Gyrs. HR 8799 will likely become a metal-polluted white dwarf, as many stars of its type do, but due to its planets’ high masses and hence strong dynamical interactions, the resulting planetary system could be much more unusual.

Diagnosing the amnesia of Exoplanetary Systems

Visions of the future: A planetary fragment orbiting a long dead star offers a glimpse of the Solar System’s fate