Welcome to the summer American Astronomical Society (AAS) meeting in San Diego! A team of astrobiters is attending the conference this year, and we will report highlights from each day here on astrobites. If you’d like to see more timely updates during the day, we encourage you to follow @astrobites on twitter or search the #aas228 hashtag. We’ll be posting twice a day during the meeting, so be sure the visit the site often to catch all the news!

Second Plenary: From Space Archeology to Serving the World Today: A 20-year Journey from the Jungles of Guatemala to a Network of Satellite Remote Sensing Facilities Around the World (by Michael Zevin)

In the conference’s second plenary session, NASA’s Daniel Irwin turned the eyes of the conference back to Earth by highlighting the huge impact that NASA missions play in protecting and developing our own planet. Irwin came to be involved in NASA through his work mapping Guatemalan jungles, where he would spend 22 days at a time exploring the treacherous jungles on foot armed with a 1st generation GPS, a compass, and a machete. A colleague introduced Irwin to satellite imagery which he was exploring, and he how these images are a strong complement to field work. The sharing of this satellite data with nearby villages helped to show the encroachment of agriculture and the necessity of connecting space to the village. Satellite imagery also played a role in archeological endeavors, uncovering dozens of Mayan cities that have been buried for over a millennia by vegetation, and provided evidence that the fall of the Mayan civilization may have been due to massive deforestation leading to drought. 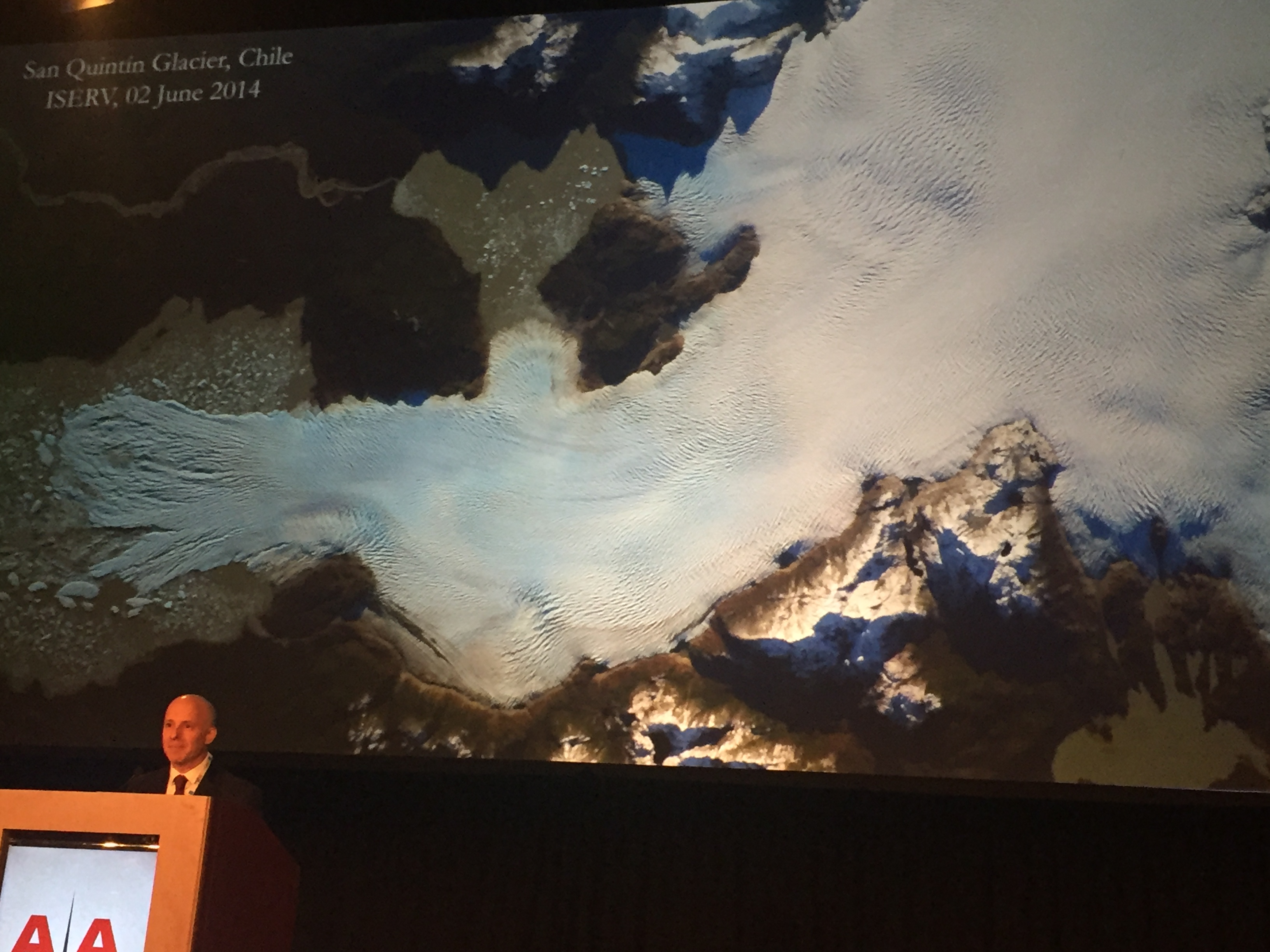 Irwin displayed the constellation of NASA’s Earth-monitoring satellites that have played an integral role in conserving our planet and alerting the world of natural disasters. He also showed images from the The ISS / SERVIR Environmental Research and Visualization System Completed Operations (ISERV, which Irwin claimed as the instrument acronym that contains the most acronyms). ISERV is a monitoring camera aboard the ISS with 4m resolution of the ground and a 14.5 km by 10 km field of view. This camera is able identify indications of natural disasters to give early-warnings to areas that are potentially threatened, and help analyze disaster aftermath to aid in recoveries. Particularly striking was an image of the retreating glaciers in Chile due to rising global temperatures. 47,000 such images are available to the public at http://earthexplorer.usgs.gov/! The contributions by NASA to the well-being of our planet and civilization are certainly staggering.

A short session on clusters of galaxies began with X-ray observations by David Buote studying the distribution of mass in a cluster. By measuring the X-ray temperature (using the spectral information) and the intensity of X-rays, Buote derived the amount of gas in each part of the cluster. By assuming hydrostatic equilibrium, this lets you derive the total mass (not just the gas, but also the stars and dark matter!) of the cluster. But it’s unclear so far whether that assumption is valid here.

Jack Burns followed this up by discussing the ways we can observe the wreckage when galaxy clusters merge together. These mergers, as Burns puts it, are “the most energetic events since the Big Bang”. When two clusters crash together, their gas is heated to very high temperatures, producing radio emission that is visible as “radio relics”. Reinout Van Weeren used similar observations in the radio to attempt to measure the magnetic fields in a few clusters. Christine Jones looked at the two primary ways of locating clusters — through X-rays and through the Sunyaev–Zel’dovich (SZ) effect in the radio — and concluded that the two methods are different: one method will easily find clusters the other is less likely to see, and vice versa. Angela Berti detected the signal of “galactic conformity” all the way to redshift z=1, an effect that makes galaxies more likely to be found around neighbors that are very similar (in terms of color or shape) than different kinds. Georgiana Ogrean closed the session by showing a merger between two galaxies that is not producing a strong shock front.

112: Astronomy Education for All: The 2017 Eclipse, Accessibility and NASA (by Meredith Rawls)

This afternoon session kicked off with an advertisement for US-based astronomers’ favorite upcoming event: the 2017 Solar Eclipse. Jay Pasachoff reviewed plans for the August 21, 2017 event and pointed us to resources about choosing the best viewing site and what to expect on the momentous day. We also heard from Denise Smith, Jim Manning, and Daniel McIntosh about various NASA-funded efforts for education and outreach in the classroom and beyond.

The other two talks from this session focused on the newly-formed AAS Working Group for Accessibility and Disability and what the astronomical community can do to cultivate a more accessible culture. Speakers Jackie Monkiewicz and Lauren Gilbert described how and why inaccessibility is driving people away from the field: by requiring people with disabilities to disclose those disabilities, by maintaining inaccessible buildings and observatories, by acting inappropriately when accommodations are requested, and by not working well in advance of a course or event to anticipate the needs of people with disabilities. To learn more about what you can do to make astronomy accessible, and what efforts are already underway (including right here at AAS 228), see these resources compiled by AstroBetter.

Press Conference: From Molecules to Galaxies (by Leonardo dos Santos)

Chris Arumainayagam (Wellesley College) opens up the press conference with a research being carried on exclusively by undergraduate students. He shows that the formation of complex molecules in space is currently explained by high energy cosmic rays and ultra-violet (UV) photons, but then presents their suggestion that low-energy UV photons may also play a significant role in this process. Additionally, if detected, the presence of the molecule Methoxymethanol could help to prove their hypothesis. 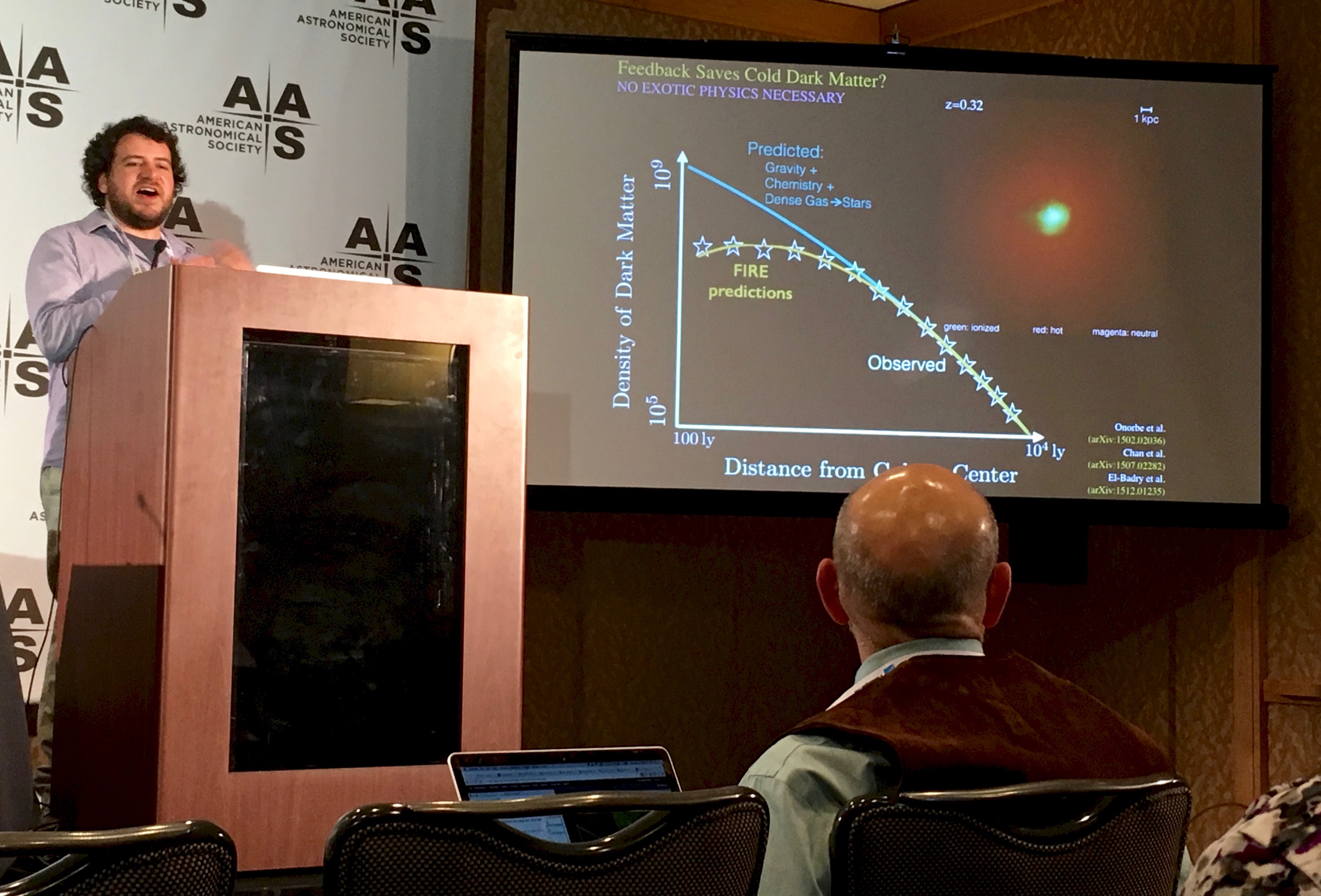 Philip Hopkins (Caltech) shows the work on FIRE, a new galaxy evolution simulation that is pushing the limits of the field, and is very successful in resolving some of its biggest issues, such as the abundance of fluffy galaxies, the cold dark matter hypothesis and the missing satellites problem.

Gregory Walth (University of California, San Diego) and collaborators discovered an unexpected giant luminous star-forming clump on a galaxy at redshift z = 0.61 — which, incidentally, is gravitationally lensed by the galaxy cluster Abell S1063 (z = 0.35). Such clumps are much more common at higher redshifts (z > 2), so this discovery raises questions on how common these objects are in the more local universe, and how they were formed.

Third Plenary: The Brightest Pulses in the Universe (by Michael Zevin)

Fast radio bursts are one of the biggest mysteries in modern astronomy. Attempts to explain their astrophysical origin span from the merging of relativistic objects to pesky aliens (one of these explanations is more accepted than the other). Maura McLaughlin took the audience on a walk through the history of FRBs and how we’ve built our current understanding of these perplexing occurrences.

The story started with the discovery of radio pulsars by Jocelyn Bell in 1967. Due to the periodicity of the radio beam in these newly-discovered objects, the time-series data of the radio sky was almost always Fourier transformed before analysis and burst events were lost in this transformation. McLaughlin believed that FRBs could have been detected as early as the 1970s if this were not the case! The story then jumped ahead to the 2000s, when astronomers (including McLaughlin) took a look back at archival data from as early as 1967 to search for short duration radio transients in our galaxy. In 2007, a Parkes telescope search for such objects in the Small Magellanic Cloud found a very bright radio burst with a strikingly high dispersion measure (which is correlated to extragalactic distances) – the first FRB candidate! 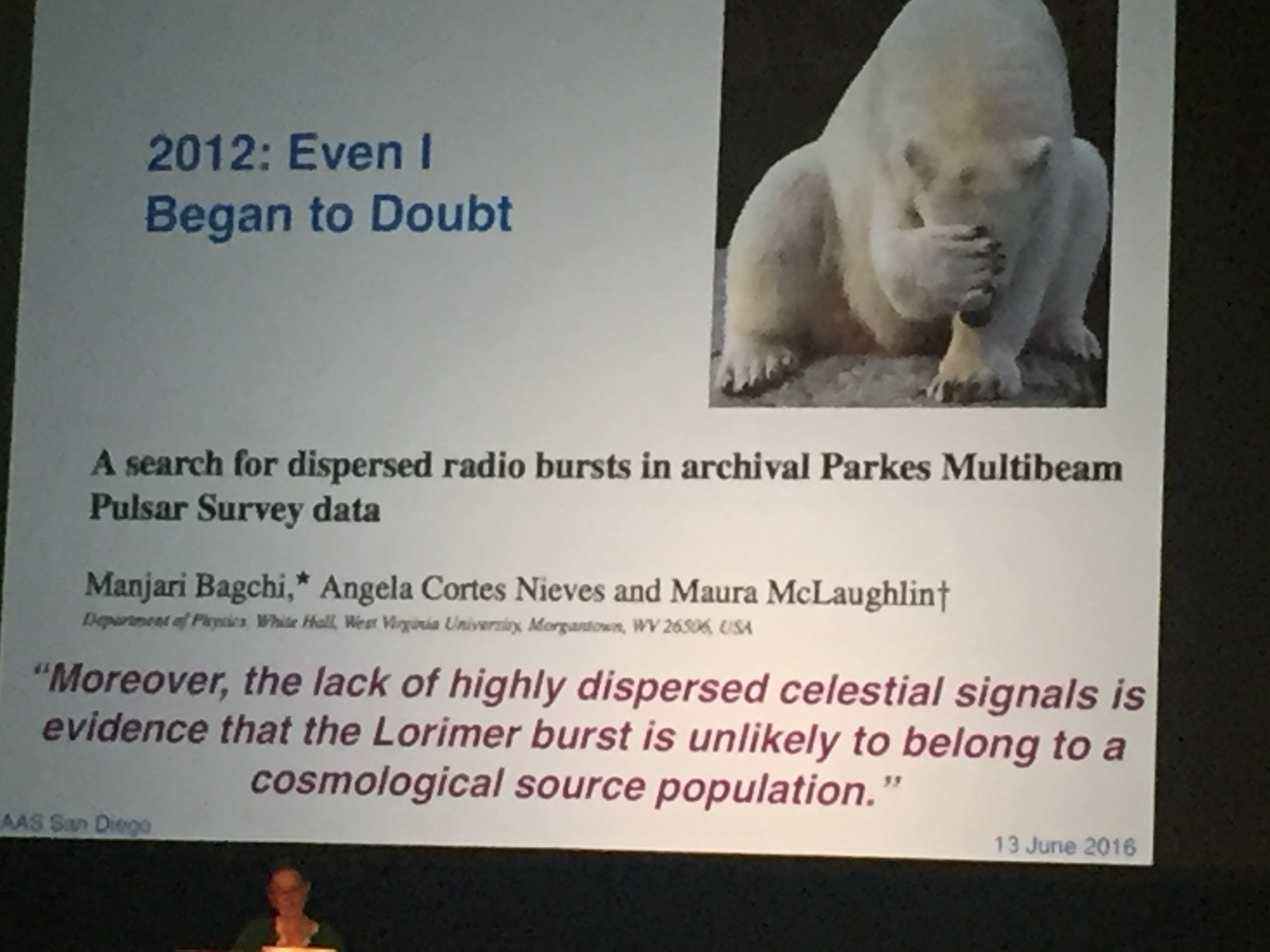 McLaughlin admits that even she had her doubts about the astrophysical origin of the Lorimer Burst.

This became known as the Lorimer Burst, and though some skepticism about its astrophysical origin pervaded over the next few years (primarily because to microwave ovens…no joke), the discovery of more FRBs using Parkes, Arecibo, and Green Bank Telescope after 2013 solidified these events as full-fledged astrophysical phenomena! A very recent study (published in 2016) even found that FRBs can repeat, with no obvious periodicity.

Though there are many theories as to what might cause FRBs, it is clear that there is no viable model that we know of to explain all FRBs. McLaughlin did, however, confirm that hungry aliens operating microwaves is energetically unrealistic.