Dinnertime for an Active Galaxy

What happens when a star passes too close to a supermassive black hole? The black hole’s gravity is so strong that the star is ripped apart. It’s called a Tidal Disruption Event, or TDE, and it is among the most violent explosions in the universe. These events have been covered several times before on astrobites, but they are incredibly rare, and have only been known about since 2011. Apart from being dramatic events in their own right, they are one of the few tools we have for studying supermassive black holes. Today’s paper is about one of these TDEs, OGLE16aaa, which was first detected in January of this year, and is still ongoing today! 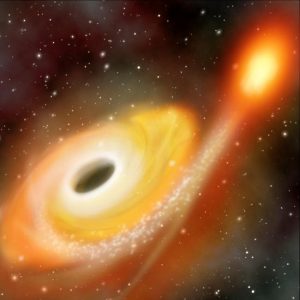 There is a clear pattern in the host galaxies in which TDEs form. Most TDE-hosting galaxies have two things in common. Firstly, they have strong Balmer absorption lines; that is, when we split their light into a spectrum, there are deficiencies at the characteristic frequencies of ionised hydrogen. This tells us that these galaxies are dominated by stars in whose spectra we see these strong Balmer lines: stars at the hot end of the range such as A-class stars. These are bright, bluish stars; in our own Galaxy, Sirius (the brightest star in the night sky) would be an example. As these stars are short-lived (on the order of ten to a hundred million years, compared to the ten billion that our sun should last), we can tell that these galaxies must have undergone an intense period of star formation within the last few tens of millions of years (comparatively recent for stars!).

Secondly, most TDEs that we have seen have been in galaxies that do not have Active Galactic Nuclei, or AGN. AGN are particularly bright and variable regions at the centre of some galaxies, and are generally thought to be produced by matter falling onto the galaxy’s central black hole, becoming super-heated as it falls.

Galaxies without AGN, but with strong Balmer lines, are believed to be the result of recent mergers between two galaxies; the merger triggers a bout of star formation while disrupting the AGN. These galaxies are pretty rare — only 2.3% of galaxies meet both criteria — but 75% of all detected TDEs have been in these AGN-less merger galaxies. It is thought that the merger might cause disruptions to stellar orbits that send some stars spinning off towards the black hole. 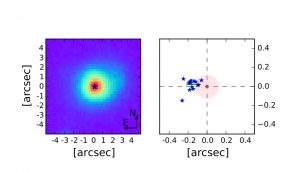 Left: The blue star shows the position of OGLE16aaa within its host galaxy. Right: Measured positions of the TDE (blue stars) and mean measured position (green cross) relative to the centre of the galaxy (red circle). The close proximity of the event to the centre of its galaxy is exactly what we expect from a TDE around the central black hole. Source: Figure 1 in today’s paper.

This is where OGLE16aaa is unusual, because its host galaxy does have an AGN, and doesn’t have strong Balmer lines. It is the third TDE to be found in an AGN-hosting galaxy, showing that while TDEs are rarer in these galaxies, it is not impossible for them to form here. This is not too big a surprise — there is nothing to say that such TDEs should be impossible — but it has implications for TDE surveys. Because the brightness of AGNs flickers anyway, it could be hard to distinguish the flare caused by a TDE from the other variability of the AGN. For this reason, surveys for TDEs have generally discounted candidates found near AGN as unreliable. However, as the evidence grows that TDEs in AGN-hosting galaxies do happen, it becomes clear that missing them will throw off our estimates of TDE occurrence rates, which could have significant consequences for future TDE work.