Catching a small galaxy in the act of formation

Scientists think they have a pretty good idea of how the first galaxies formed: Gas accreted into areas where dark matter was more dense, relics known as “overdensities” left behind from the Big Bang and inflation. More and more mass glommed together; as the mass grew, so did the gravity. Eventually, stars formed and the first galaxies came into being. Scientists have been able to simulate this chain of events using our current understanding of physics in the early universe, but actually observing this process would require instruments that could measure very small scales at the earliest epochs. Alternatively, you could look for very small, newly-forming galaxies in the current universe to observe how they accrete matter. Unfortunately, most of these dwarf galaxies have been or are in the process of being cannibalized by other, more massive galaxies, rather than doing the accreting themselves.

The authors of today’s paper have conducted a study of a dwarf irregular galaxy called DDO 68. This galaxy lies in an expanse of fairly empty space known as the Lynx-Cancer void about 13 Megaparsecs (or 42 million light years) away from us. DDO 68 is extremely metal-poor, with a metallicity of only 2.5% that of the Sun. Low metallicity, meaning that the galaxy has very low occurrence of elements heavier than hydrogen and helium, is an indication that a galaxy is very young and likely still in the process of forming. This dwarf galaxy has very irregular morphology, with an extended comet-like tail containing stars of many different ages. This is illustrated in the figure below. 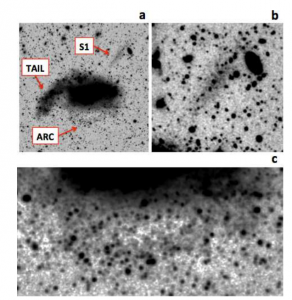 Figure 1 Images of DDO 68 taken with the Large Binocular Telescope. (a) shows the galaxy and three separate substructures, denoted as S1, the Tail, and the Arc. S1 is shown magnified in (b), and the (c) shows a zoomed image of the Arc.

The team studying DDO 68 took very deep images of the galaxy using the Large Binocular Telescope located in southeastern Arizona. In these images the astronomers found minute structures that have not been identified previously. Figure 1 shows these two formations, referred to as the “Arc” and “S1” in panels (b) and (c) of the image. The first step was to make sure that these structures are actually associated with DDO 68. The authors did by ensuring the the luminosity of the stars in these structures are compatible with being at the same distance as DDO 68.

Next, using color-magnitude diagrams, the age of the stars in the Arc were determined to be have mostly younger stars with ages of about 200 million years. This is illustrated in Figure 2, where different tracks on the color-magnitude diagram correspond to different stellar ages. However, the stars in S1 are all greater than 2 billion years old. This indicates the the Arc and S1 originated from two different systems that are being accreted by DDO 68. This is supported by the fact that there are no companions near enough to the galaxy to have perturbed it in that manner.

So, is the dwarf galaxy DDO 68 cannibalizing its even smaller companions? To test their conclusion, the authors carried out simulations to see if they could replicate the unusual morphology of the galaxy. The simulations showed the the tail and the Arc could be reproduced using the accretion of a single companion. The S1 structure required an additional system to be accreted. In this paper, astronomers have identified unique features that indicate this isolated dwarf galaxy is in the act of accreting smaller companion galaxies. This will help to inform our understanding of the formation of the first galaxies.