Investigating Local Galaxies to Learn about Distant Ones

Very distant galaxies can teach us a lot about the formation and evolution of some of the earliest systems in the Universe. However, they are also notoriously difficult to study as, due to their distance, they appear both dim and small. Due to the expansion of the cosmos, their spectra have been stretched and shifted redwards – giving those distant galaxies the name “high-redshift” galaxies. Studies of such objects indicate they have different properties compared to more nearby local galaxies: they are 10 times better at forming stars than local galaxies, while also being significantly smaller than those galaxies found near us. Additionally, there are indications that the interstellar medium (ISM), the matter (gas, dust, and cosmic rays) between stars, in high-redshift galaxies differs from that in nearby ones.

The BPT Diagram
To learn about the conditions of the ISM, the authors study some of its elements: the ISM contains hot, ionized hydrogen, oxygen, and nitrogen gases which, when ionized by radiation from e.g. stars or active galactic nuclei, give off monochromatic light at well-defined wavelenghts. By measuring the ratios and strengths of these so-called spectral lines it is possible to determine how much ionizing flux is present. The authors plot the ratios of hydrogen, oxygen, and nitrogen lines on the Baldwin-Phillips-Terlevich, or BPT, diagram (see Fig. 1). Where a galaxy falls on this diagram can give us clues about both how ionizing the radiation within it is, and whether the galaxy is powered by star formation or contains an active galactic nucleus. While this works quite well for nearby galaxies, it has been suggested that the position of both star-forming and AGN-containing galaxies in the distant Universe is different to those of local galaxies on the BPT diagram. This raises the intriguing question: what causes this change in the conditions of the interstellar medium?

Selecting Local Analogues for High-Redshift Galaxies
Given the difficulty in studying very distant galaxies, how can we study their interstellar media? The authors of today’s paper attempt to answer this question by selecting nearby galaxies which are located at the sample place as high-redshift galaxies on the BPT diagram (see Fig. 1), and which are hence thought to share the same physical conditions of the ISM as star-forming galaxies at redshifts 2-3 (when the Universe about 2-3 billion years old). If these local galaxies are indeed true analogues, they can then be used as local laboratories to study the very distant star-forming galaxies – making it easier to study them in greater detail as they appear brighter and more extended than their high-redshift cousins. The authors of today’s paper select 252 low-redshift, i.e. local, galaxies from the Sloan Digital Sky Survey whose hydrogen, oxygen, and nitrogen spectral line ratios put them into a similar place on the BPT diagram as those found in very distant galaxies. 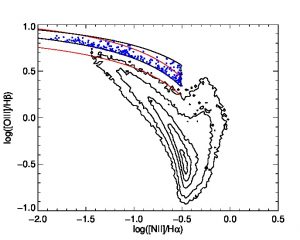 Fig. 1: Selecting the local analogues sample on the BPT diagram which plots oxygen, hydrogen and nitrogen ratios against each other. The blue dots are the selected local sample, while the black contour lines show where “normal” local galaxies live. As can clearly be seen, there is a distinct offset between the selection and the space on the plot which normal galaxies occupy. In order to mimic the ISM conditions found in high-redshift galaxies, the authors selected their local sample so as to recreate their high ionization ratios. It isn’t currently clear what causes the observed offset between the distant and local galaxy populations.

Establishing the Properties of Local Analogues
Having selected their local sample, the authors measure various physical properties of these galaxies, and then compare them to those found in normal local galaxies and very distant star-forming ones. This allows the authors to determine whether the selected sample can indeed be used as a local laboratory to learn about very distant galaxies. They find that their selected galaxies form on average 3.6 solar masses per year (in comparison, the Milky Way forms 1 solar mass per year) and are about a factor of 10 less massive than normal nearby galaxies (see Fig. 2). Using these two measures, the authors calculate that the galaxies in their sample are very effectively transforming gas into stars (also see Fig. 2), building faster than even the distant galaxies! Previous studies have found that high-redshift galaxies have smaller sizes compared to nearby galaxies with similar masses. Determining the sizes of their local galaxy sample, the authors find that the local analogues are more compact than normal star-forming, but much like the high-redshift galaxies. Additionally, the authors compare the ratio of ionizing flux and gas density, a property known as the ionization parameter, as well as the relationship between the stellar mass and amount of metals. They find good agreement in both cases, making their analogues reliable local laboratories for studying distant galaxy populations with comparable ionization and interstellar medium conditions to the high-redshift sources. 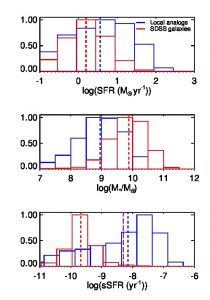 What the Future Might Hold
Having established that their selected sample reproduces the ISM conditions found in very distant galaxies, the authors indicate that future studies of their local analogues could provide much information on the environment inside distant galaxies. Since the local analogues are relatively nearby, it might be possible to resolve individual star forming regions in them, and hence study in detail the physical properties within them and make direct comparisons with those found in the high-redshift Universe.