Major mergers do not matter (much)

At the time of writing, the universe has settled down into a comfortable middle-age. Things are relaxed: most galaxies are simmering away, forming small numbers of new stars (or not forming any at all). They look more or less like the finished product. Interesting things are still happening to galaxies, but mostly on very large scales (e.g. the ongoing formation of galaxy superclusters).

It wasn’t always so. In the universe’s misspent youth (about ten billion years ago) things were rather more violent. Galaxies were crashing into each other, stars were being formed rapidly … it was during this time that the most massive galaxies we see today were built. Major mergers (collisions between galaxies of similar sizes) are some of the most dramatic events in the universe and have huge consequences for the galaxies involved in these cosmic car-crashes. They reassemble nice, tidy spiral galaxies into messy ellipticals and can kick off huge waves of star formation as giant gas clouds crash together and collapse.

Pretty dramatic. But how important are major mergers, in the grand scheme of things? Are most elliptical galaxies created in this way? Is it fair to say they are responsible for causing the formation of most stars in the early universe?

It’s a compelling argument, but the authors of today’s paper examine the evidence. Using data from CANDELS, a survey of the distant universe, they can look deep into the past. The light from the 625 galaxies they consider has made a long journey, up to 11 billion years to get to us, so we can open a window on galaxies during this interesting era.

The galaxies the authors choose are elliptical and are rapidly forming stars during the era they are observed. Certainly they could have ended up this way through a major merger – but did all of them, or are other alternative routes more common? The authors look first for morphological disturbances (any irregularity in their shape) in their galaxies (see Figure 1). These are a sure sign of the galaxy having been created by a major merger. The data are precise enough to see the signature of past mergers involving galaxies close in size, but not if one is more than five times the size of the other. They find that only one in five of these galaxies has obviously undergone a major merger. The conclusion is clear: major mergers are not the dominant mechanism for transforming galaxies into elliptical types.

This is the era of peak star formation – never again does the universe form so many stars in such a short period of time. Is this because of the high rate of major mergers? Note that if the 21% of galaxies they look at that did form via major merger create many more stars than the other galaxies, this could still be true…

By looking at how bright the galaxies are at ultraviolet wavelengths, the authors probe how fast stars are forming in the galaxies in their sample. The physics of this is that only the most massive stars (which have very short lives) emit significant amounts of ultraviolet light (although, as any holidaymaker will know, even our own sun emits some). If these massive stars are present, it’s because their numbers are being constantly replenished by ongoing star formation. The faster star formation is happening, the more there will be and the brighter the galaxy will shine at these wavelengths.

By this method the authors establish that only about one third of stars formed during this era are made in galaxies recently created by a major merger (or currently undergoing one) – see Figure 2 for details. Moreover, since stars clearly are forming in galaxies that have not been created that way, it’s fair to say that the major merger itself is not directly responsible for even that much star formation. In other words, if the two galaxies hadn’t collided, they’d still have kept forming at least some stars. The authors conclude that only a small fraction of star formation during this era is attributable the occurrence of major mergers. In short, they’re just not that important. 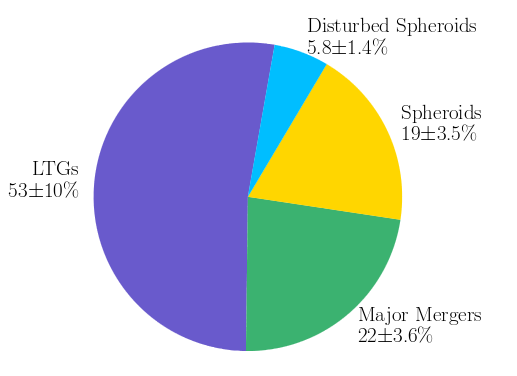 Fraction of star formation occurring in galaxies like those shown in Fig. 1. LTGs = Late-type (spiral) galaxies; spheroids is an alternative term for elliptical galaxies. Figure 4 from the original paper.

Scratch that theory then. While interesting (and very dramatic) in their own right, major mergers are minor players in galaxy evolution. Time for us to look at other processes if we want to understand the big picture of how galaxies evolve and end up the way they are today!