Now You See Them, Now You Don’t – How to Find Distant Galaxies

Exploring our Origins
In today’s article we are going to look at a classic paper in astrophysics, as well as humanity’s age-old question: where did we come from? While there are many, many possible avenues to explore with this question, we are going to look at it from the angle of the Milky Way’s progenitors. In particular, we are going to look at examining the types of galaxies from which our home Galaxy evolved, and how – some 20 years ago – astronomers developed a novel technique to discover such far away objects.

As we look into the distant reaches of the Universe we are effectively time-travelling back to an earlier time in the history of the Cosmos (this is because light travels at a finite speed) and hence, by studying some of the most distant galaxies visible, we can explore the earliest times of galaxy formation and observe their evolution through cosmic time. The way in which astronomers measure the distance to far-away objects is through a phenomenon called redshift, a measure of how much the light emitted by the object has been stretched between leaving its host galaxy and arriving in our telescopes. This stretch, which pushes distinctive features of the observed spectrum towards redder wavelengths – hence: redshift – arises due to the expansion of the Universe. An alternative way of looking at this phenomenon is to think of the photons losing energy as they speed through the ever-expanding Universe – and the less energetic a particle, the longer its wavelength, thereby pushing it “redwards” on the spectrum.

How to Find Distant Galaxies – the Drop Out Technique
In a series of papers published in 1995 and 1996, Steidel et al explore a novel technique to facilitate finding “normal” star-forming galaxies in the distant Universe. In particular, the authors target the epoch when the Universe was 2 billion years old, corresponding to a redshift of 3. The light emitted from such a distant object will have been stretched by a factor of 4 (since the observed redshifted wavelength is calculated as (1+z) times the emitted one, where z gives the object’s redshift). By calculating how long ago a photon from a galaxy at this redshift was emitted, it is possible to determine that such a galaxy is about 11.5 billion light years away and we are seeing the Universe as it was 11.5 billion years ago, or (since it is now about 13.5 billion years old) when it was about 2 billion years old.

The authors make two assumptions about the spectra of these high-redshift galaxies, namely that their ultraviolet spectra are flat (i.e. do not exhibit strong features), being dominated by emission from young massive stars, and that they contain a pronounced spectral “break” at 912Å, called the Lyman break and hence giving this type of galaxy the name “Lyman break galaxy“. This abrupt break in observed flux arises due to the absorption of higher-energy photons by hydrogen in the galaxies, leaving only those photons whose energy is insufficient to ionize or “excite” neutral hydrogen atoms.

Steidel et al make use of this distinctive spectral break feature in order to select distant galaxies. Their novel technique works as follows: by imaging a galaxy in three filters which probe adjacent regions in the galaxy’s spectrum, it is possible to find galaxies whose observed flux “drops out”, meaning that flux is observed in the two longer-wavelengths filters (say filters centred on green and red wavelengths), but then abruptly disappears in the shorter-wavelength one (which might be centred on the blue part of the spectrum; see Fig. 1). Since a higher redshift pushes any spectral features towards the longer wavelength side of the spectrum, the 912Å break in a galaxy at redshift 3 is pushed into the optical part of the spectrum. This explains why this technique focused on galaxies at redshift 3, though since then it has been extended to even more distant sources. 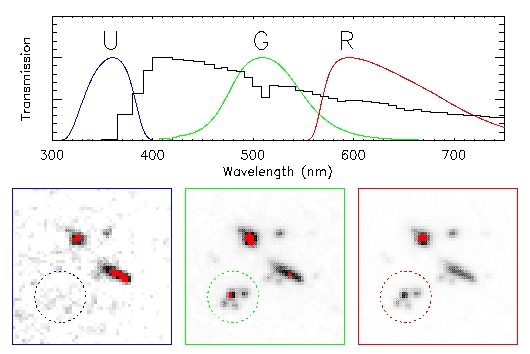 Fig. 1: An example of the drop out technique using the same filters as Steidel et al. The bottom row shows cut outs of a galaxy in filters corresponding to increasingly long wavelengths towards the right. It is clearly visible that the object has dropped out in the shortest wavelength (“bluest”; left most) filter. The top plots show the filter sensitivity profiles (in blue, green, and red), together with a sketch of the galaxy’s spectrum. While there is flux in both the green (G) and red (R) filter, the spectrum has a “break” such that the galaxy is no longer visible in the shortest filter (U).

Observations
Using the Keck telescope together with the Low Resolution Imaging Spectrograph (LRIS), the authors obtained spectra of several galaxies over two nights in October 1995. They were able to identify 23 objects and could place the redshift of 16 of them within the range z=3.01 – 3.43. While the remaining 8 objects had undetermined redshifts, none were actually considered inconsistent with being at redshifts around 3. This provided strong support that the drop-out technique was successfully able to identify galaxies at the correct redshift,  hence allowing the selection of a specific sample of such galaxies to be studied further.

Exploring Distant Galaxies
The authors note that there is a striking similarity between their high-redshift galaxies and local examples of starburst galaxies, i.e. very intensely star-forming galaxies. Furthermore, they find that the star-formation in these distant galaxies could have begun as early as a gigayear (1 billion years) prior to the epoch at which the galaxies are observed.

In their summary, the authors confirm that they have discovered a population of star-forming galaxies at redshift about 3 using a highly efficient colour-selection technique; these galaxies are likely the progenitors of today’s evolved galaxies such as our Milky Way home.

The new technique opened up the way for the first systematic study of the nature of galaxies at such large distances!

Implications and Developments since this Paper
Since this classic paper was published in 1996 the field of the study of very distant galaxies has expanded considerably! Using filters in the red part of the optical wavelength range as well as infrared ones, it has become possible to detect even more distant sources – with some of the most distant candidates now probing within the first 500 million years of the Universe’s history!