We’d like to introduce Astrobites readers to a similar site published in Farsi, Staryab: an astro-ph summary blog and so much more! They’ve been active since 2014. We’re pleased that Staryab’s creators were willing to write this guest post to explain what they’re doing. 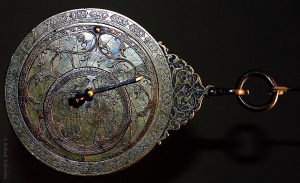 Staryab means astrolabe. This is an astrolabe from the Islamic Art Department at the Louvre. It’s an ancient astronomer’s instrument used to measure positions of objects in the sky. (Photo by Babak A. Tafreshi.)

Staryab is an astrophysical literature website written in Farsi. Our goal at Staryab is to introduce the world of professional astronomy to those at the beginning of this road, especially undergraduates in physics and astronomy, enthusiastic high schoolers, and amateur astronomers. We present an interesting paper every week in a simple format that is comprehensible to our readers. The papers are usually grabbed from the ocean of recently submitted astro-ph papers on arXiv and are prepared by Iranian professional astronomers both from inside and outside of Iran. Other parts of the website are as follows:

The founders of Staryab are Azadeh Keivani and Irene Shivaei (both female). In addition to the founders, Staryab has 21 guest authors writing occasionally for Staryab (this number is growing). Staryab’s webmaster is Shayan Ghiaseddin, who is kindly maintaining our website. Staryab has been highlighted in public media a few times.