Spiral galaxies, striking in their design, possess even more structure than meets the eye.  Stars concentrated in the center of spirals can form a boxy or peanut-shaped bulge, within which can reside a brilliant, glowing “X”.  A slight disturbance to the orbits of stars in the centermost parts of a spiral can cause the spiral to partly unwind into a bar, unraveling from the inside out.  Such bars are actually quite common—nearly 70% of spirals have bars today—and can dramatically change the galaxy, providing a highway for gas to travel from the outer regions of the galaxy to its center.  Our own galaxy, the Milky Way, also has a bar, and may possess a bright ring that both encircles the bar and forms  of stars—possibly the brightest feature in our galaxy to a distant observer.  Within this star-forming ring, the point where the bar meets the spiral arms may be the most intensely star-forming region of our galaxy.

A bar with bright, starry ends is not a feature unique to our galaxy, and points to intriguing physics. Gas within the bars can follow different orbits than gas within the spiral arms of a galaxy; the collision of these giant streams of gas could trigger star formation, possibly by causing massive amounts of gas to build up at their crux (a similar phenomena may be playing out in the gas of the nearby the Magellanic dwarfs).  It’s difficult to test this idea in our own galaxy, in which the bar-arm interface is hidden to all but radio and infrared eyes.  So the authors of today’s paper looked elsewhere—the spiral galaxy NGC 3627 (or M 66), a nearby, strongly barred and nearly face-on spiral whose star-forming gas has been mapped. 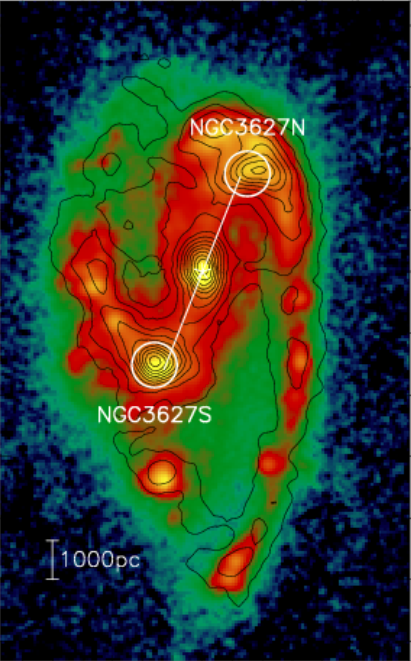 The authors first discussed the different bar and spiral orbits that the streams of gas could have.  They considered two cases:  one in which the bar and spiral orbited at the same velocity, and one in which the spiral arms orbited more slowly.  The authors extracted the velocity of the gas near the northern and southern ends of NGC 3627’s bar, and found that at both ends, the gas appeared to have two velocities, corresponding to the case in which the spiral arms orbited more slowly.  At the southern tip, the star formation rates were higher and the detection of two velocities in gas at the southern end was more significant than in the northern tip.

These findings support the idea that colliding streams of gas from the bar and arm may encourage increased star formation.  The authors suggested that the northern tip may have been disturbed by an interaction with a nearby galaxy, evidence of which is apparent elsewhere on the northern side of the galaxy.  In some locations near both the northern and southern tips, there was evidence of gas moving at a third velocity—potentially signaling the presence of particularly dense molecular clouds embedded within the streams of gas.  These third-velocity gas clouds often had velocities clustered near the velocities of either the bar or the arm, indicating that both bar and arm possessed clouds.  The collisions of such clouds could give rise to individual stellar nurseries.

Further work is required to confirm that the high star formation rates at the tips of bars are caused by the collision of gas clouds on different orbits in a galaxy’s arms and bar.  However, the authors have taken a critical first step in studying the bar-arm interface of one spiral galaxy, which may help shed light on the most vigorously star-forming regions in our own.

COMs in Cores: Complex Chemistry in Dense Cores in the Taurus Star-Forming Region