Title: The impact of bars and interactions on optically selected AGNs in spiral galaxies

Introduction: How to feed your galaxy

Although nearly every massive galaxy has a supermassive black hole at its center (even our own Milky Way has one), active galactic nuclei (AGN) like to show theirs off the most. There are many different kinds of AGN, but we think they’re all just different views of the same thing: a supermassive black hole at the center of a galaxy that accretes large amounts of gas, creating a superheated accretion disk and powering incredibly energetic jets.

The physics of how AGN actually work are still active (ha!) areas of research. Although the model described above is conceptually simple, it’s hard to explain some of the details. For instance, huge amounts of gas are needed to sufficiently power the AGN—how exactly does that much gas get to the center of a galaxy?

There are plenty of physical mechanisms that could do this. Galactic bars in some spiral galaxies (including our Milky Way) can drive gas to the centers of the galaxies. Alternatively, galaxy interactions or mergers can produce gas inflows; indeed, evidence suggests that galaxy mergers may produce the most energetic AGN.

Previous studies have presented lots of conflicting results about these two mechanisms, and there is debate about which—if either—is important for fueling AGN. We’ve even covered this debate here on Astrobites, with a paper that suggests that bars aren’t associated with AGN at all! Today’s paper takes a novel approach to answering the question of what’s really responsible for fueling AGN.

In today’s paper, Alonso and his team aim to compare the relative importance of galactic bars and galaxy interactions in fueling AGN. To do this, they use data from the Sloan Digital Sky Survey to identify a sample of AGN hosted in barred spiral galaxies, and a sample of AGN hosted in pairs of galaxies. They then identify a control sample of AGN in unbarred, isolated galaxies. To control for other properties (redshift, magnitude, stellar mass, color, and stellar age population), Alonso et al. make sure their control sample has distributions of these properties that are similar to the distributions of the two other populations. Figure 1 shows examples from these three different galaxy samples. 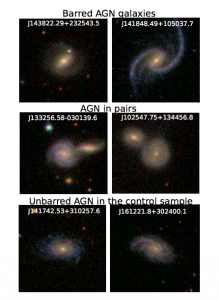 How can we measure which mechanism is important for driving AGN? First, the authors decide to measure the strength of AGN activity using the luminosity of the [OIII] (doubly-ionized oxygen) emission line. It takes a large amount of energy to doubly-ionize oxygen, so the strength of the [OIII] line is correlated to the amount of energy output by the AGN.

The authors also use the [OIII] luminosity to estimate the relative accretion rate of each AGN. This parameter roughly measures the efficiency of the AGN and is calculated by dividing the [OIII] luminosity by the mass of the black hole. This accounts for the fact that even if two black holes are equally efficient at accreting gas, the more massive black hole will accrete a larger overall amount of gas and will appear more active than the less massive one.

Alonso et al. plot the distribution of the activity and efficiency of the AGN in their three different samples. These are shown in Figure 2, which illustrates that both the barred sample and the galaxy pair sample have higher AGN activity and efficiency than the control population. However, the barred population appears to have a higher fraction of very strong and energetic AGN than the population of galaxy pairs—suggesting that while both bars and interactions are important mechanisms for fueling AGN, bars may be more efficient at it. 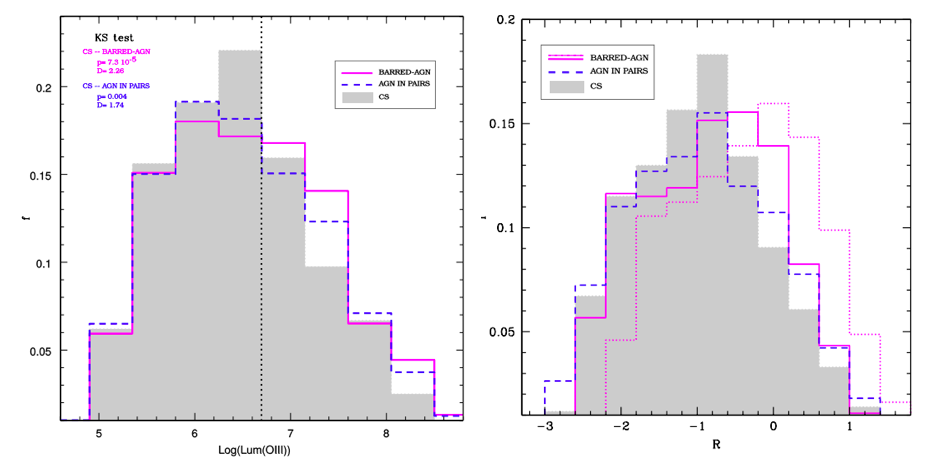 Figure 2. The distributions of the activity (left; measured by [OIII] luminosity) and the efficiency (right; measured by accretion rate parameter R) of the three AGN samples: gray is the control sample, magenta is the barred spiral sample, and blue is the galaxy pair sample. In the right panel, the solid and dotted magenta lines indicate two different ways of measuring the black hole mass for barred spirals. Figures 3 and 4 from the paper.

Is that the whole story? The authors then dig a little deeper and try to figure out if any other galaxy properties affect the activity and efficiency of AGN. They find that more active and more efficient AGN tend to have more massive hosts with bluer and younger stellar populations. This holds true for all three of their samples.

It turns out that in the galaxy pair sample, the properties of the AGN host’s companion can play a big role. If the sample of galaxy pairs is limited to pairs where the companion galaxy is massive and blue with younger stars, then the fraction of very strong/efficient AGN is just as high as in the barred sample. And if we only consider galaxy pairs with companion galaxies that are less-massive, redder, and contain older stellar populations, then the activities and efficiencies of the AGN look a lot more like the control sample.

So although bars might be more efficient than galaxy interactions in fueling AGN, galaxy properties seem to complicate matters. Future studies will hopefully further investigate the physics behind these population differences!