One of the most important issues currently plaguing astronomers is how galaxies and their central super massive black holes (SMBHs) coevolve together and interact. There is a correlation between the mass of a galaxy and the black hole at the centre, suggesting they somehow manage to grow together. The problem is simulations seem to show that black holes grow on short timescales (10-100 million years) in bursts of intense activity during which they accrete the material around them. This activity transforms the black hole and it’s surroundings into an active galactic nucleus (AGN). Whereas galaxies are thought to grow their mass more steadily through star formation and galaxy mergers that take billions of years. So if the black hole and the galaxy are growing on such drastically different timescales, how come we see their masses so tightly correlated?

In order for a black hole to eventually accrete some material, this material must lose almost all of its angular momentum, difficult to do without a process to trigger it. Simulations have shown though that with interactions, bars, disk instabilities and mergers of galaxies such a process becomes much more feasible. Particularly these simulations have shown that mergers can drive gas in a galaxy inwards toward the black hole due to tidal forces. Therefore astronomers have long been searching for as much observational evidence as possible for links between merging galaxies and the presence of a high/low power AGN in a galaxy. The theory being that the bigger the merger, the more gas is funnelled inwards and the black hole then accretes, producing an AGN which emits a lot of high energy light often in the form of radio waves (due to synchrotron radiation from the electrons spiralling in the magnetic field of the black hole). 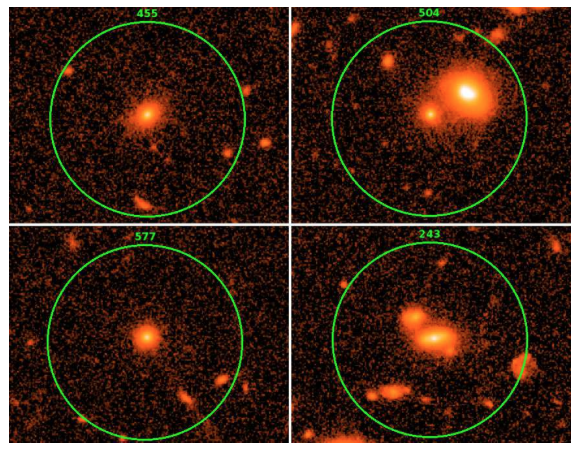 Their sample is composed of galaxies with 1 < z < 2.5 which are all classed as Faranoff-Riley class II (FRII); this means that the brightest component of the radio comes from the edges of the emission, for example clumps at the ends of jets expelled by the black hole. This is opposed to FRI class galaxies whose brightest radio component is located at the centre of the galaxy. Radio loud FRII galaxies with high X-ray power are selected from the 3CR catalog and those with low X-ray power from Extended Chandra Deep Field South (CDFS). They also use this catalogue to select low X-ray power radio-quiet AGN along with the specific 4Msec CDFS catalog to select a sample of high X-ray power radio-quiet galaxies. The X-ray emission comes from the accretion disc aruond the black hole, so by splitting each sample by low/high power X-ray emission as well, we can understand how the rate of the accretion ties in with this study of mergers.

A selection of the radio-quiet AGN selected are shown in Figure 1. The Hubble Space Telescope (HST) GOODS-SOUTH field was also used to select a sample of inactive galaxies to use as a control sample against the radio AGN . 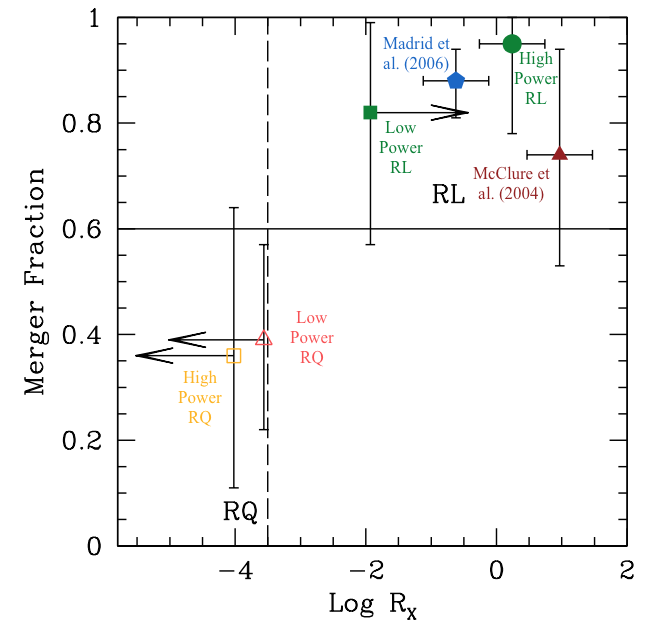 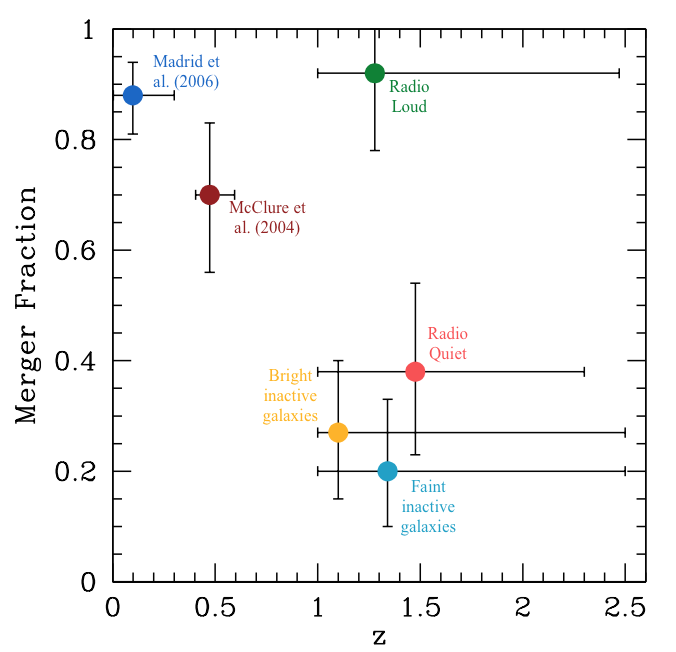 Figure 3: The merger fraction against the average redshift for each sample as labelled. The red and blue symbols show results measured in other studies including McClure et al. (2004) and low redshift galaxies from Madrid et al. (2006). Originally left panel of Figure 5 in Chiaberge et al. (2015).

With these samples selected, the authors then try to determine whether mergers are associated with any of the low/high power X-ray emission or the radio loud/quiet AGN activity and whether any of these classes are more likely to be triggered by a merger than others. Firstly the authors look at the merger fraction found in each sample of high and low powered radio-quiet and radio-loud AGN samples – this is a measure of how many of the galaxies in each sample are classified (by 4 human classifiers) as having clear signatures of a merger, for example: double nuclei, close pairs, tidal tails, bridges or distorted morphologies. The authors found this fraction to be 92% for the radio loud galaxies and 38% for the radio quiet galaxies (compared also to 27% and 20% for bright and faint inactive galaxies respectively).

There is clear statistical evidence therefore that the radio loud AGNs almost always reside in galaxies where mergers are undergoing or have recently happened. The authors also find that this merger fraction is independent of the X-ray power of the AGN. This dependence of the radio loud AGN on the merger fraction can be  clearly seen in Figure 2 for the samples in this study and low redshift samples (z < 0.3) from other investigations. Figure 3 also shows the merger fraction plotted against redshift and shows that this result is invariant with redshift.

The authors conclude that radio-loud galaxies are unambiguously associated with mergers, independent of redshift and power, whereas radio-quiet galaxies are indistinguishable from normal galaxies in the same redshift range. This suggests that mergers do indeed produce radio loud AGN. The authors therefore speculate that the AGN observed at z > 1 have a much higher black hole spin in order to produce such radio loud emission. This ties in very well with this merger theory, which are thought to increase the spin due to the merger of the two black holes at the centres of the originally merging pair of galaxies.