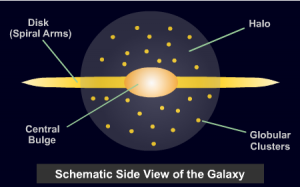 A schematic illustration of galaxy morphological components. This shows the spiral arms and bulge of a spiral galaxy.

Most galaxies generally fall into two morphological types: spirals and ellipticals. Spiral galaxies are flat, thin disks, with several spiral arms, a central stellar bulge, and possibly a central bar. Elliptical galaxies are smooth, featureless, semi-spherical distributions of stars. Both types have a central nucleus which is believed to house a super massive black hole. Why do galaxies separate into these distinct populations? How do they form?

We aren’t completely sure, but the best theory to date is the hierarchical model of galaxy formation. In this model, galaxies formed in the early universe from the gradual accretion of many smaller galaxy-like clumps of stars, the galaxy “building blocks”. In fact, when we look out to the early universe, the galaxies that we see do appear to be smaller and less well-defined than galaxies in the present universe.

Of course, not every galaxy falls into one of these two morphological categories. A good deal are actually “irregular” galaxies that don’t show any of the clear morphological components of either spirals or ellipticals. The contention of this paper is that some of these irregular galaxies might actually be aged versions of those galactic building blocks that have survived to the present day. The authors use the Sloan Digital Sky Survey data set to search for these sorts of galaxies in the nearby universe. 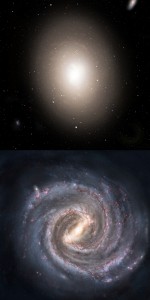 Maybe some protogalaxy building blocks survived to the present day, but the trouble in finding them is that we know that irregular galaxies can be formed when ordinary galaxies have their morphologies disturbed when they crash into one another. A big part of the data analysis in this paper is dedicated to separating interacting irregular galaxies from genuine irregular galaxies (GIGs). Merging galaxies are fairly easy to identify as two galaxies either colliding or passing close to one another, disturbing each other gravitationally. Galaxies that have recently merged are merger remnants and they appear elongated, with wispy tails.

The authors use the criteria that the galaxy should not be interacting or show evidence of recent interaction, should not have a central bulge, bar, spiral arms, or nucleus, have no nearby partner galaxies, and should not have the smooth light curve of an elliptical galaxy. Altogether this narrows down their sample of GIGs to 33 objects from the SDSS data set, excluding about 50% of galaxies that were otherwise categorized as irregular.

These galaxies do appear to be genuinely irregular: they still have a large fraction of gas, meaning that they haven’t converted all their gas to stars yet; they don’t have a large abundance of heavier elements, meaning that their composition is closer to the primordial abundance of the early universe; they also appear to be less massive, less bright, and smaller than typical galaxies at this redshift. The lack of a bulge in these galaxies indicates that they have not formed a supermassive black hole, either.

All of this points to the fact that these galaxies are still at an early evolutionary phase, and they could help us understand something of the initial building blocks that came together to form spirals and ellipticals; this can in turn help us understand how galaxies form. This study also demonstrates that simple irregular morphological classification doesn’t distinguish between galaxies that are irregular due to interaction and those which are genuinely irregular.

Some of the galaxies classified as genuinely irregular. Notice the lack of smooth stellar distributions and absence of spiral arms, bars, or central nuclei. From Figure 6 in the text.