The supermassive black hole sitting at the center of our galaxy, Sgr A*, has always been a little less exciting than the name implies.  Astronomers have never observed anything fall directly into the black hole. As far as we know, it just sits there, waiting for its next meal to come along.

We can now put all of our theorizing to an end and let the observations begin! As of April, the head of the gas cloud has officially reached the supermassive black hole – or at least it did 1400 years ago given the distance to Sgr A*. Nonetheless, for the first time, we have observed a cloud of gas being ripped apart by the black hole itself – a process that will take a full year.

The gas cloud is rapidly becoming difficult to detect, as the surface brightness has decreased drastically due to this affect. Gillessen et al. used the adaptive-optics based integral field spectrometer SINFONI onboard the VLT for a total of 1480 (24:40 hours) on-source integration time. While this data was collected in 2013, there were years of previous archived data as well, available for comparison within their analysis.

The cloud is currently at its closest approach.  These observations show that it is being stretched out by the black hole’s extreme gravitational field – a process known as spaghettification. The difference between the gravitational force placed on a particle extremely close to the gas cloud versus a particle slightly further from the gas cloud is so great the entire cloud is stretched.  The gas cloud is only 20 light hours from the black hole and has now been stretched over more than 15,000 Schwarzchild radii around the pericenter – closest approach – of the orbit. Figure 1 shows that spaghettification has begun!

Figure 1 – A series of position-velocity diagrams from 2004 to 2013 extracted from SINFONI data. You can easily see the evolution of tidal shear as both velocity and position have drastically increased by 2013. Credit: Gillessen et al. 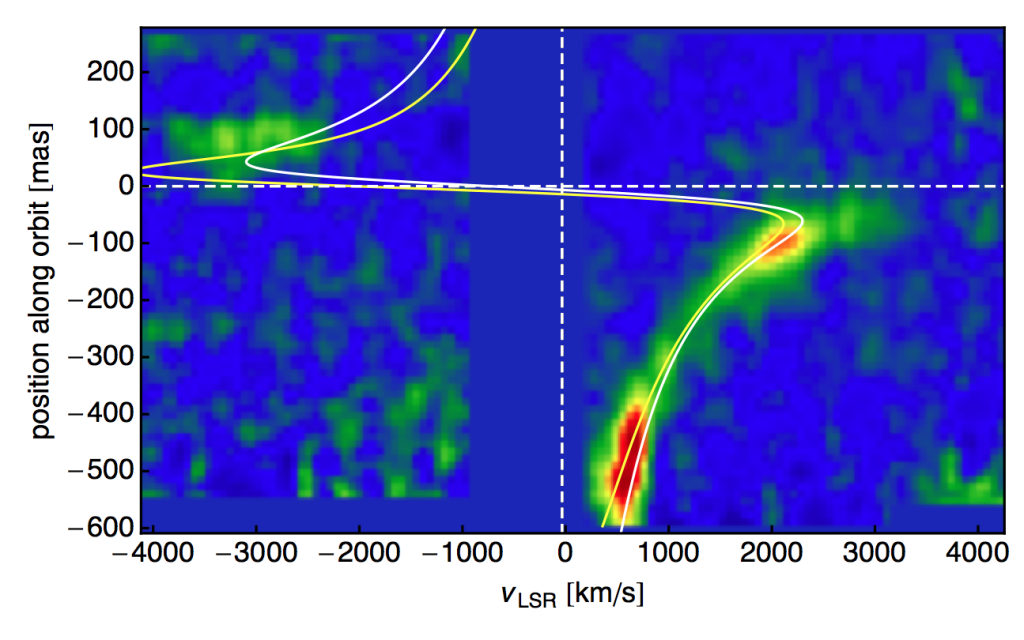 The origin of the gas cloud remains unclear.  These new observations do contest with the gas cloud having a stellar core.  It is likely that the gas originated from the stars currently orbiting Sgr A*.

Telescopes around the world are slewing their giant mirrors toward the center of the galaxy. This intense observing campaign will provide a wealth of data, revealing more about the gas cloud, and the supermassive black hole itself. Keep checking in at Astrobites. We’ll keep you posted!