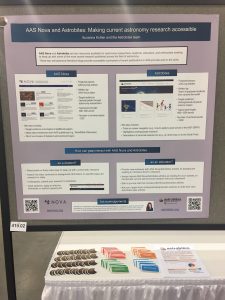 This week Astrobites will be reporting from the joint 48th meeting of the Division for Planetary Sciences (DPS) and 11th European Planetary Science Congress (EPSC) in Pasadena, California! Two astrobiters are attending this conference, and we will report highlights from each day here on astrobites. If you’d like to see more timely updates during the day, we encourage you to search the #DPSEPSC hashtag!

Monday morning was the official start of the meeting. We’ve got a joint poster for Astrobites/AAS Nova at poster #419.02 in the exhibit hall — come stop by to chat (and for stickers!). For those of you who can’t be here in person, here’s an update on the plenaries and press conferences from the first day of DPS this year.

The meeting kicked off with the presentation of the Jonathan Eberhart Planetary Sciences Journalism Award, which was awarded to Nadia Drake. Nadia has been an instrumental figure in space sciences communication. She’s reported on everything from other worlds to exploding stars, to the fabric of the universe. Her work is an inspiration to many of us here at Astrobites. Be sure to check out her stuff! 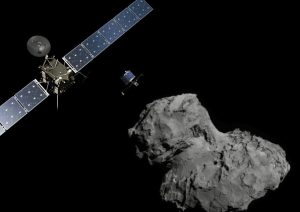 The Rosetta Mission gathered huge media attention in November 2014 when its robotic lander, Philae, landed on comet 67P/Churyumov-Gerasimenko. Almost two years later, Matt Taylor stands on the stage of Ballroom D to report on the mission’s current status. Rosetta was given its name because, like the Rosetta stone, the spacecraft is a key to deciphering the origin of the Solar System. Dr. Taylor begins by showing just a small fraction of the copious amounts of images that were gathered. Comets, which were previously thought of as icy dust balls, are now known to be geologically complex places, he discusses. Rosetta has paved a completely new field of cometary geology and they’ve still only analyzed about 5% of all the data that was collected.

“Now that we have the whole data set we are revising our numbers to get a sense of the whole picture.”

From measurements of the molecular oxygen, combined with the detection of nitrogen, noble gases and the D/H ratio in the water, we know that this comet was born in a very cold region in the protoplanetary nebula, far from the Sun. Meaning, this comet might offer us a glimpse of what the building blocks of planets and moons may have been. The D/H ratio also tells us that Earth’s water was likely not delivered from comets, since the D/H values from the comet do not match those from Earth’s oceans. But from looking at the data taken from Noble gasses, it’s possible that other complex material may have been.

In late September of this year, the Rosetta mission concluded its mission as planned with a controlled impact onto the comet. On decent they were able to successfully study the comet’s gas, dust and plasma very close to the surface.

“We’ve got the Rosetta stone, now we have decades or work to do to analyze the data.”

The Latest Views of Venus as Observed by the Japanese Orbiter: Takehiko Satoh 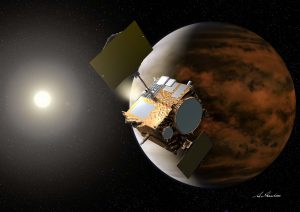 Artist’s illustration of the “Akatsuki” mission to Venus. [JAXA]

Just one year ago, the Japanese Aerospace Exploration Agency held a press conference to announce the successful arrival of Akatsuki, Japan’s very first planetary orbiter, into a Venus orbit. Dr. Takehiko Satoh is here to today give an overview of the mission. Understanding the atmosphere of Venus has been difficult because of the thick cloud decks that inhibit our ability to see down to the surface.

Dr. Satoh explained that Akatsuki’s mission is to understand and detail the atmospheric dynamics of Venus, get a 3-D view of wind fields and describe any spatial and temporal variations in the atmosphere. This includes answering the long standing question of whether or not Venus has lightning and/or volcanism. Akatsuki is also the first and only meteorological satellite orbiting a planet other than the Earth, which will lead to some very interesting data in the near future.

Unfortunately we will have to wait a while to answer all of those questions considering first light images were taken in December of 2015 and regular observations started on April 1, 2016. Nevertheless, Dr. Satoh was able to show some very exciting preliminary studies:

Dr. Satoh ended by explaining that their team has a lot of work to do in order to fully synthesize all of these discoveries but that in the near future we should expect a lot more interesting science!! 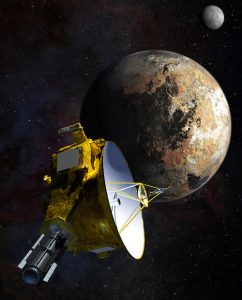 New Horizons: Overview of Results From and Plans After the Exploration of the Pluto System: S.A. Stern

The last plenary talk was given by Dr. Alan Stern who gave an exciting overview of the New Horizons mission. He started by showing the massive scientific payload that allowed New Horizons to accomplish, what he says is as much science as several Mars missions, combined.  In fact, the mission met all of its science objectives, published over 40 studies and presented findings at over 200 meetings. New Horizons also just recently won and initiated its extend mission, which warrants a massive congratulations to the New Horizon’s team! So what were the major scientific studies you should be on the lookout for?

Dr. Stern says the most surprising finding (for him) was the stark difference between Pluto and Charon. Pluto and Charon have similar densities and sizes and New Horizons also showed that there was, at some point, some degree of atmospheric transfer from Pluto to Charon. Besides that though, everything else (surface & atmosphere) about the two bodies are wildly different. Pluto has a complex and active surface. Some terrains on Pluto are brand new, while others formed over four billion years ago. Pluto also has a complex atmosphere, which contains molecules such as water, methane and nitrogen. They also found that these molecules are not uniformly distributed around the planet. Charon, on the other hand, has no detectable atmosphere — or, if it does, it is smaller than the atmosphere of our very own Moon. Charon’s terrains are also all older than four billion years old, with no new activity.

Dr. Stern says they is still a lot of work to be done to answer exactly how these planets ended up with such different properties. And THIS Sunday all the New Horizons data will be available, so you too can download it and start to analyze some of these peculiar features. 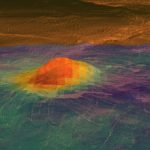 The first press conference of the meeting opened with a talk by Piero D’Incecco (German Aerospace Center), who discussed evidence for recently active lava flows on Venus. Using clever numerical modeling techniques combined with observations from ESA’s Venus Express mission, D’Incecco and collaborators have looked through Venus’s thick cloud cover in infrared wavelengths to detect several lava flows from the top and eastern flank of the volcano Idunn Mons, which is located in Venus’s southern hemisphere. The team’s work has focused on identifying the location and extent of these flows to learn more about volcanism on the surface of Earth’s “twin” planet. The full press release can be found here.

Next up was Nick Schneider (Laboratory for Atmospheric and Space Physics at the University of Colorado, Boulder), who spoke about the most recent results from the MAVEN mission to Mars. Three interesting findings have come from MAVEN’s unprecedented ultraviolet coverage of Mars:

The full press release can be found here.

Images from MAVEN’s Imaging UltraViolet Spectrograph demonstrating the rapid cloud formation in Mar’s atmosphere. These images were taken over the span of ~7 hours. [NASA/MAVEN/University of Colorado]

Next came a series of three talks on the intriguing comet 67P/Churyumov-Gerasimenko. The first was by Mattia Galiazzo (Western University, Canada), on a study of the origin of comet 67P. Using computer simulations, Galiazzo and collaborators modeled the comet’s most probable orbit in order to discover where the body came from. They find that 67P is likely relatively new to the inner parts of our solar system, having lived in the scattered disk — the outskirts of the solar system — for millions of years. Perturbations by other bodies in our solar system then tweaked the comet’s orbit until it arrived in the inner region only ~10,000 years ago. The full press release can be found here. 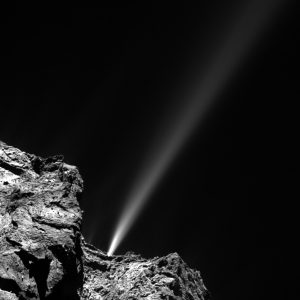 A collimated outburst from Comet 67P, as captured by Rosetta’s OSIRIS camera. [ESA/Rosetta/OSIRIS]

Stubbe Hvidd (German Aerospace Center) next gave a dynamic talk on 67P as the “creaking and cracking comet”. Hvidd used high-resolution imaging of the comet to demonstrate that its surface has several recently-formed cracks — especially in its neck, the narrow region between its two lobes — that indicate it’s under stress as it hurtles through space in its orbit. Hvidd and collaborators have modeled the forces on the comet to show that its rotation and activity are creating stresses that will likely change the shape of the comet over the next several hundred years.

Finally, Jordan Steckloff (Planetary Science Institute) wrapped things up with a discussion of outbursts from comets like 67P. Steckloff suggests that, rather than being caused by internal pressure like geysers on Earth, comet outbursts might the result of avalanches on their surfaces. He showed that material sliding down the comet’s surface to a local low-potential point can enter a region that is sublimating due to sunlight exposure. As the granular materials slide into this region, they can be blown off in a tightly collimated plume that matches observations of comet outbursts. The full press release can be found here.