Status: accepted for publication in ApJ

In recent years, the South Pole Telescope (the featured image for today’s post) has discovered an intriguing population of gravitationally lensed dusty star-forming galaxies. These galaxies, some of the most distant and faint in Cosmos, are able to be studied because their light is magnified by a foreground gravitational lens. Using this phenomenon, astronomers can learn more about the stars, gas and dust – not the kind of dust under your bed that you should probably vacuum up some day, but instead the type that blocks, absorbs and scatters light – in the very distant Universe.

One galaxy in particular drew the researchers’ attention as it stood out in the 2500 square degree (that’s about 6% of the sky; for comparison: the full Moon subtends about 0.2 square degrees) survey undertaken by the South Pole Telescope: its name is SPT-S J034640-5204.9, though we shall call it SPT0346-52.

This galaxy, the main protagonist of today’s astrobite paper, is located at a redshift of 5.656. That means that, since its light can only travel at a finite speed, we are observing it at a time when the Universe itself was a mere 1 billion years old. This makes SPT0346-52 part of the first population of galaxies to have formed in the Universe, and one of the most distant of the type of galaxy known as “dusty star-forming galaxies” to have been observed thus far. Because of this it has been studied intensely using a wide range of wavelengths to probe its physical properties: so far it had been observed with HST, Spitzer, Herschel, ALMA, APEX and the VLT!

From ALMA observations it could be determined that the foreground lensing galaxy (a “mere” 8 billion light years from Earth) was magnifying the light from SPT0346-52 by a factor of about 5.6, and that the intrinsic infrared luminosity of SPT0346-52 was a factor of 1000 higher than that of our nearest neighbour, the Andromeda galaxy. The star formation rate of SPT0346-52 was calculated to be about 4500 solar masses per year – compare that to the Milky Way’s “meagre” rate of 1 solar mass per year! In addition, given that with a radius of about 0.6 kpc it’s about 25 times smaller than our own Galaxy, this indicates that SPT0346-52 has one of the highest star formation rate densities of any known galaxy! 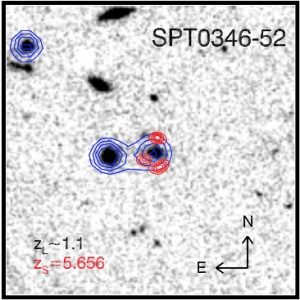 While much has been learned about this fascinating galaxy from previous multi-wavelength observations, one intriguing question remains:

What causes its high luminosity?

Does SPT0346-52’s high infrared luminosity arise solely from intense star formation, or does it harbour an obscured active galactic nucleus (AGN)? This is the question explored in today’s paper.

Several indicators appear to favour the presence of an AGN: the dust temperature in SPT0346-52 is found to be about 52 K, making it warmer that that of typical dusty star-forming galaxies. The luminosity ratio of some of its emission lines is consistent with a quasar (the most energetic and distant type of active galactic nucleus), and it shows strong H2O emission lines which are similar to those found in distant quasars. However, SPT0346-52 does not show any indications of an AGN in deep optical spectroscopy.

In order to shed more light on this mystery, the authors of today’s paper undertook two further observations, probing the extremes of the electromagnetic spectrum. They observed SPT0346-52 in X-rays using the Chandra satellite. A clear detection of X-ray photons would be indicative of the signature of an accreting black hole powering an AGN, while a purely star-formation driven galaxy would emit a lot less X-ray flux. Additionally, the authors undertook radio observations with the Australian Telescope Compact Array (ATCA). Similarly to X-rays, radio waves can be used to distinguish star-forming galaxies from radio-loud active galactic nuclei.

Results and What They Can Tell Us

In almost 14 hours of X-ray observations, just over 3 photons were detected, and over one hour of radio observations yielded no detection at the source position…

However, together with the previous multi-wavelength observations, it was possible to use the upper limits from the X-ray and radio part of the spectrum to constrain the shape of the spectrum of SPT0346-52 (see Fig 2). This indicated that a pure starburst spectrum of the galaxy is the best fit to the observations. Similarly, the upper limits of the ATCA radio observations are consistent with a star-forming galaxy, and would have to be a factor of at least 2 higher for a radio-loud AGN. 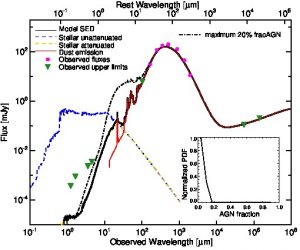 One of the Most Extreme Starbursting Galaxies in the Universe

Also, while the presence of an AGN cannot be completely ruled out, the authors conclude that star-formation – and not AGN activity – is the dominant driver behind the far-infrared emission observed. The authors plotted SPT0346-52 on a diagram showing the distribution of X-ray luminosity vs far-infrared luminosity for both star-forming and AGN-dominated galaxies (see Fig. 3). This shows that SPT0346-52 lies left of the dividing line between star-formation and AGN, making it likely that it is indeed powered by very high star formation rates.

One question, however, remains:

What Could Power Such High Star Formation Rates?

The authors offer several possible explanations for the finding that SPT0346-52 has one of the highest star formation rate densities (a measure of how many stars form each year in a given volume) in the Universe. 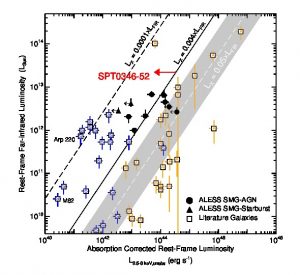 Fig. 3: This plot shows the positions of a range of galaxies on a far-infrared vs X-ray luminosity diagram. SPT0346-52 is the red arrow, while star-forming galaxies are marked as blue S, and AGN as yellow A. Using the dividing lines between AGN and star-formation driven luminosities indicated on the plot suggests that SPT0346-52 does not contain an AGN. Hence it appears as though SPT0346-52’s extreme brightness is powered by star-formation.

Hence, despite the many observations of SPT0346-52, several mysteries still remain unsolved. The authors suggest that this would make SPT0346-52 an ideal candidate for follow-up observations with the JWST, which is  due to launch in 2018…