Plans for a new gamma-ray mission

Today I’m going to take a break from summarizing astronomical results and look to the future instead.  Today’s Astrobite concerns the plans for a new gamma-ray observatory: e-ASTROGRAM, which is currently being proposed to the European Space Agency.  If selected, it will launch in the 2029.

Why are gamma-rays important?

Gamma-ray observatories are designed to study the highest energy radiation in the entire universe (> 100,000 electronvolts).  These particles can be generated in a variety of different ways: solar flares, supernova remnants, and gamma-ray bursts are just a few. Gamma rays can have energies covering several orders of magnitude (from about the energy involved in the x-ray you would get at a hospital to 10 million times that). It is important to study them in every energy band to get a full picture of how astrophysical phenomena happen.  More information about gamma-ray production mechanisms and a brief history of gamma-ray astrophysics and why its important can be found from NASA’s Goddard Space Flight Center.

e-ASTROGRAM will cover the energy range from 0.3 MeV to 3 GeV. There are a currently a number of both currently-operating and planned gamma-ray experiments, but they cover higher energies than this. The lower energy range is comparatively under-studied compared to higher energies. This mission is meant to be the successor to COMPTEL Telescope, which stopped taking data in 2000. As you can imagine, technology has improved in the last decade and a half and any experiment built today will have much greater sensitivity! 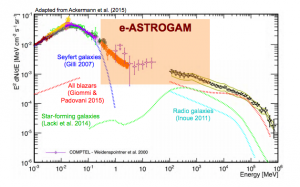 Current measurements of the extragalactic gamma-ray intensity.  The x-axis is the energy, while the y-axis is the energy per second per area (this is a common way to state the intensity of a source at a particular energy).  The shaded portion is the parameter space that will be probed by e-ASTROGRAM. Note the current gap in measurements in that energy range (Figure 3 from the paper)

There are many important science goals that can be studied in-depth in the e-ASTROGRAM energy range.  The authors run through a few of them, dividing them into broad categories.

The first is studying jets from objects such as gamma-ray bursts, which are the most energetic explosions known to us. This is important because the MeV energy range, which the instrument will study, is where the transition to an energy spectrum with poorly-understood particle acceleration processes contributing begins.  By studying this energy range, one can determine things such as the role of magnetic fields in powering the jets.  For more information about magnetic fields and gamma ray, see this link.

The second science goal is studying how high-energy particles impact galaxy evolution.  There is still much to be learned about how cosmic rays (charged particles that interact to create gamma rays) diffuse across interstellar clouds and the effect this has on star formation and galaxy evolution.  Our galaxy has an excess of gamma-rays and positrons (antielectrons) toward its center, and it is expected that e-ASTROGRAM will be able to decipher their origins.

e-ASTROGRAM will also study nucleosynthesis, which explores the formation of atoms more complex than hydrogen.  In addition to telling us how isotopes are created in stars, this will allow us study supernova explosions in more depth.

In addition to the stated science goals, it will also be able to discover new transient sources.  These include terrestrial gamma-ray flashes and solar flares.  In this manner, e-ASTROGRAM will become tied into the growing field of multimessenger astronomy, where observatories that study different particles (photons, neutrinos, etc.) observe the same source at the same time in order to get a more complete picture of it.

The detector itself will look similar to other satellite experiments, but with innovative new design elements.  It will consist of three main components. The first is a tracker.  Gamma rays will be detectable when they undergo either Compton scattering (the scattering of a photon off a charged particle) or pair conversion (the creation of an electron/positron pair) in the Si strip detectors of the tracker.  The second component is a calorimeter will measure the energies of these particles. Lastly, the anti-coincidence system helps separate the gamma rays from the very large backgrounds present in outer space.