In the far outer reaches of our solar system reside the small dwarf planets. These kid-brothers of the big eight official planets are often forgotten. The most well known is Pluto, but there are in fact over 1,650 known minor planets that orbit out past Neptune. The larger of these trans-Neptunian objects (TNOs) are big and cold enough to retain volatiles, like nitrogen (N2) and carbon monoxide (CO), on their surface. Studying these icy realms can tell us a lot about other, even smaller, icy bodies in the outer solar system and helps us form a more complete view of our solar system.

The third largest dwarf planet is Makemake, or as it was originally christened, “Easterbunny” (it was discovered three days after Easter in 2005). With a diameter around 1,400km, it’s about two and half times smaller than our moon, and it takes 310 Earth-years to orbit the sun. In order to better understand it’s surface, a Spanish team observed the dwarf planet over different rotational phases in 2008, the results of which are reported for the first time in this paper. They choose to look in the near-infrared where the volatiles show absorption bands. Using a spectrograph on the William Herschel Telescope they observed Makemake’s spectra over the 0.28 – 0.52 µm and 0.70 – 0.95 µm ranges. They split the spectra they observed into four sets with each group corresponding to a different phase of the dwarf planet’s rotation. This way they could look for rough variations across different parts of the the dwarf planet instead of global uniformities. Unfortunately, the data from the last phase was too noisy to use and was discarded, so in the end only 70% of the surface was imaged over three rotational phases. The three spectra are shown in Figure 1. 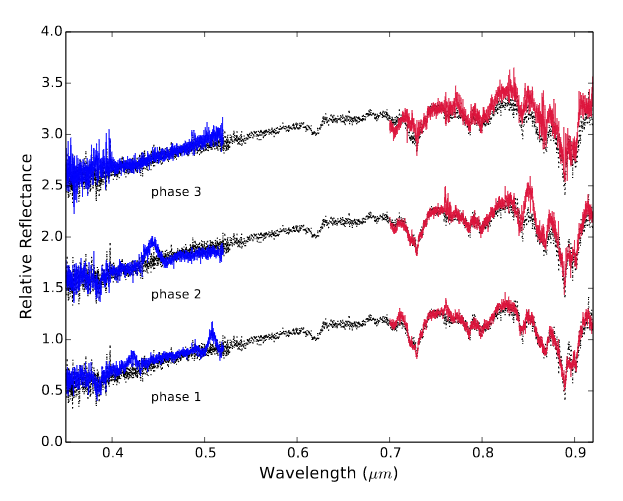 Figure 1. Spectra from three phases of Makemake’s rotation, vertically offset for clarity. The blue and red lines correspond to the two wavelength coverages observed. Black dots come from a study by Licandro et al. in 2006.

You’ll notice the blue side of the spectra is fairly featureless where as the red side has lot of absorption lines.   These are due to methane-ice, which is abundant on the surface. Seven of these bands are marked in Figure 2. These lines are important for learning about the surface of the dwarf planet. In icy bodies, the broadness of the line is inversely proportional to the depth of the ice layer. In other words, the weaker the line, the thicker the layer is.   Although the blue part of the spectra isn’t as visually appealing as the red, it still has a lot to tell us. By measuring the slope we can identify the presence of other organic compounds. 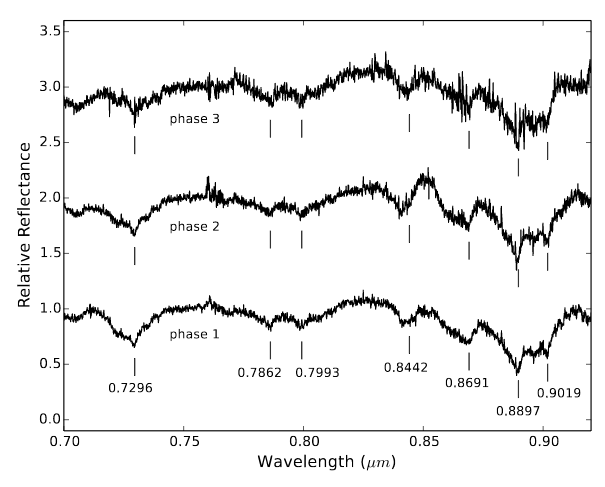 Figure 2. Spectra from three phases of Makemake’s rotation, vertically offset for clarity. The blue and red lines correspond to the two wavelength coverages observed. Black dots come from a study by Licandro et al. in 2006.

Analyzing the spectra, it looks like Makemake is a closer twin to Pluto than Eris (the second largest dwarf planet). Turns out, the dwarf planet has more solids than volatiles. The absorption bands show that the methane is mixed with nitrogen in a solid state on the surface. Makemake has less nitrogen than Eris or Pluto, which makes sense for a smaller planet with less gravity to retain those volatiles.

Since the three phases turned out to be nearly identical, it seems like the surface of Makemake is fairly uniform. However, more observations would be needed to confirm this.

The authors also compared the spectra they took with observations done three years prior. They found no differences between the spectra meaning that the surface composition didn’t change significantly over three years. This makes sense given the dwarf planet didn’t get much closer to the sun (and thus warmer) over those three years.

Although these observations of the distant icy world are far from complete, they can begin to give us a first look at the faces of Makemake.