A Too-Hot Pulsar Speeding Through the Galaxy

Pulsars — the rapidly rotating, highly magnetized neutron stars that beam radiation from their magnetic axes — are as mysterious as they are exotic. They’re most often observed at radio frequencies using single-dish telescopes, and are sometimes glimpsed in X-ray and gamma-ray bands. Far rarer are pulsar observations at “in-between” frequencies, such as ultraviolet (UV), optical, and infrared (IR) (collectively, UVOIR); in fact, only about a dozen pulsars have been detected this way. However, their study in this frequency range has proved enlightening, as we will see in today’s post.

A pulsar too hot to handle

While one would expect a neutron star to cool with age if an internal heating mechanism does not operate throughout its lifetime, observations of the millisecond pulsar J0437–4715 (an interesting object in its own right) yielded surprising results. In a 2016 study, far-UV observations revealed the 7-billion-year-old pulsar to have a surface temperature of about 2 × 105 K — about 35 times the temperature of the Sun’s photosphere. This finding inspired Rangelov et al. to observe another millisecond pulsar, J2124-3358 (a 3.8-billion-year-old pulsar with a spin period of 4.93 ms), in the far-UV and optical bands using the Hubble Space Telescope (HST).

Because so few pulsars have been studied in these frequency ranges, their spectral energy distributions (SEDs) in this regime are poorly understood. Generally speaking, the spectra of normal, rotation-powered pulsars reveal a nonthermal (not dependent on temperature) component in optical and X-rays caused by electrons and positrons in the pulsar magnetosphere. In the far-UV, some pulsars show a thermal (blackbody) component in their spectra, thought to come from the surface of the cooling object. Analysis of the team’s HST images revealed an SED that is best modeled by a combined nonthermal and thermal spectral fit, with nonthermal emission dominating at optical wavelengths and thermal emission appearing in the far-UV (see Figure 1). If their interpretation is correct, this implies a surface temperature for J2124-3358 that is between 0.5 × 105 and 2.1 × 105 K, which is very much in line with the temperature of J0437-4715. If this proves to be the case, these two measurements will strongly suggest the presence of a heating mechanism in millisecond pulsars. However, various fits using only nonthermal components in the far-UV are still valid, so it is impossible to make an absolute determination of the correct fit.

There are quite a few heating mechanisms that could be invoked to explain these objects’ high temperatures, ranging from the release of stored strain energy from the pulsar’s crust to dark matter annihilation in the pulsar’s interior. More spectral coverage of J2124-3358 is necessary to both check the validity of the nonthermal and thermal combined fit and to get closer to determining more specifically the heating mechanism in play.

Figure 1: Thermal (red dashed) and nonthermal (blue dashed) combined spectral fit to HST far-UV/optical data for J2124-3358. The black line signifies the sum of both components. Because there is uncertainty about the nature of the nonthermal component, two possible spectral slopes are shown. Figure 7 in the paper.

A (bow) shocking find in the far-UV

Images of  J2124-3358 also show the presence of a bow shock, which is an arc-shaped shock that occurs when an object is moving faster than the interstellar medium (ISM) sound speed. J2124-3358 was known before this study to be accompanied by such a shock in H-alpha (Hydrogen transition from n=3 to n=2) filters, for which plenty of neutral hydrogen is required. As a result of the HST observations, J2124-3358 was found to have an (albeit fainter) far-UV shock coincident with the H-alpha shock (see Figure 2). This is only the second such object (after J0437-4715) to show a far-UV bow shock. It is absolutely possible that many pulsars cause bow shocks that don’t emit in H-alpha, but do in other wavelength regimes. Studying these more carefully will yield information about the nature of the ISM.

In order to learn more about the heating mechanisms operating in these objects as well as the bow shocks that sometimes accompany them, many more pulsars will need to be studied using various optical, UV, and IR filters. Studies in the far-UV are only possible with Hubble, so it will be a long time before a sufficient number of objects will be studied at these frequencies in order to make solid conclusions about the nature of such interesting phenomena. 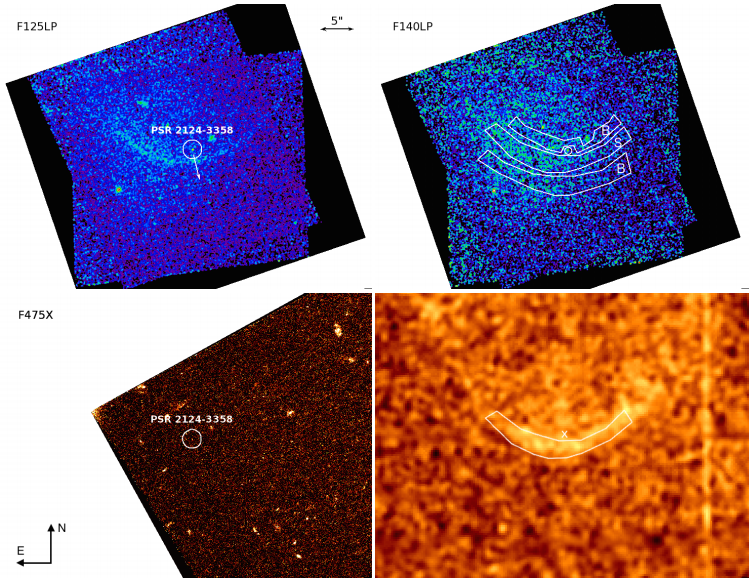 Figure 2: New observations of J2124-3358 from this study using the HST at three different wavelengths are shown in the top (left and right) and bottom left images. The shock is clearly visible in the far-UV using the F125LP filter. The bottom right image shows a previous H-alpha observation of the same pulsar. Figure 1 in the paper.