Discovery of Water on 51 Peg b

51 Peg b was the first exoplanet ever discovered orbiting another main sequence star (51 Peg). This Jupiter-sized planet, found orbiting in a 4-day orbit, revolutionized astronomy and upended our understanding of planet formation. It was discovered by measuring the star’s spectrum and seeing periodic shifts in the star’s radial velocity. This radial-velocity shift was caused by the planet gravitationally pulling on the star, which indirectly proves the existence of the planet. However, even early on, it was realized that astronomers should be able to see a similar radial-velocity shift in the light reflected by the planet. Critically, this method could used to determine the planet’s inclination, mass, and atmospheric composition, properties that would otherwise be near impossible to measure. First used in 2010, it has now been used on several hot Jupiters.

The authors used 2010 data from the CRyogenic high-resolution InfraRed Echelle Spectrograph (CRIRES) at the Very Large Telescope (VLT) in Chile to observe the star 51 Peg in the near-infrared. The observations were taken continuously for 4 hours to measure the change in radial velocity as the planet orbited the star. The biggest challenge in reducing the data to a usable form was the correction/removal of the telluric lines (contamination from seeing the Earth’s atmosphere). Several rounds of data reduction were required to remove the telluric lines, which are much stronger than the star’s spectrum.

After obtaining a clean spectrum, the authors then searched for signs of 51 Peg b’s spectrum, a difficult task since the star’s spectrum is suspected to be about 1,000–10,000 times stronger than the planet’s spectrum. Luckily, planetary atmospheres at the observed wavelength might be thick with gases that have dense spectral-line signatures, making them easier to see. However, since the planet’s spectrum was not known beforehand, a grid of atmospheric models with calculated spectra was created. Many different atmospheric models were generated using the spectra of water, carbon dioxide, and methane at several different abundances, temperatures, and pressures, and by making some additional assumptions about the structure of the atmosphere (e.g., no clouds). 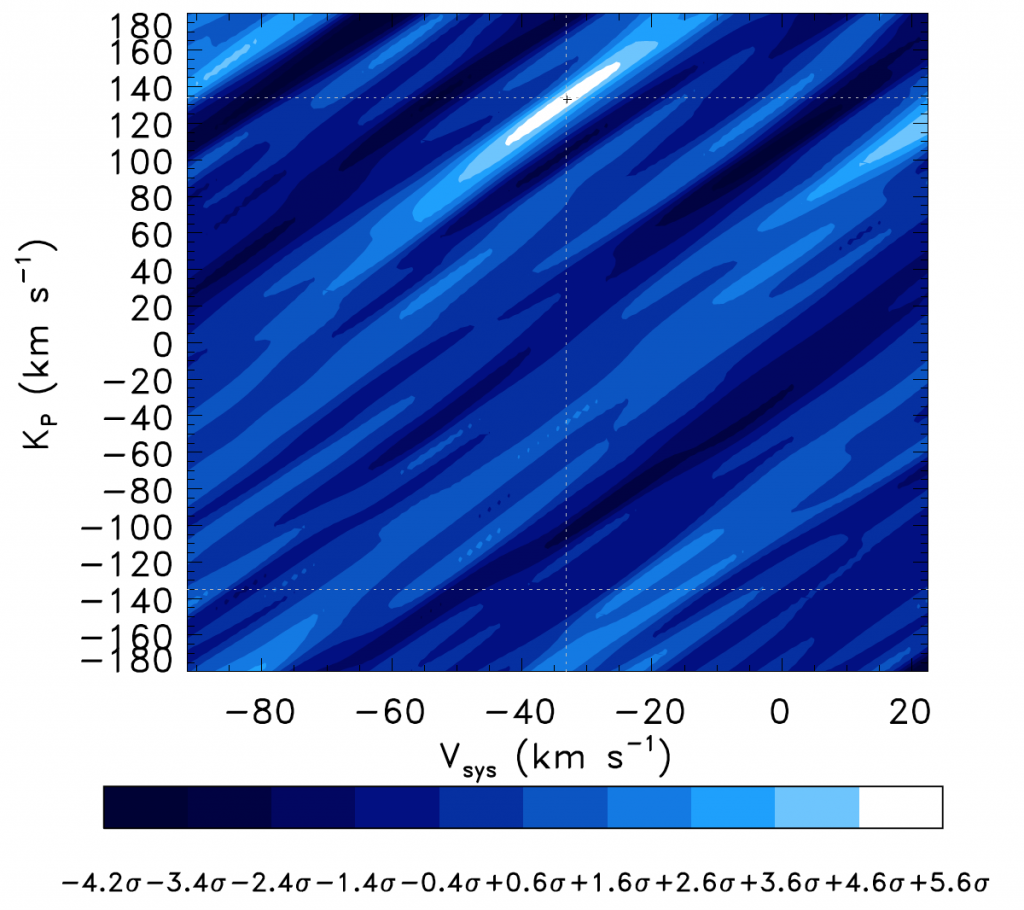 Figure 1: Significance of cross-correlation in two dimensions. The x-axis is the star+planet’s system velocity, while the y-axis is the planet’s velocity relative velocity to the star. Whiter regions have higher significance (better fits), while darker regions have lower significance (worse fits). The dashed vertical line represents the velocity of the entire star-planet system. The top horizontal dashed line is the best fit velocity of the planet. If this were a false positive signal, one might expect a similar white region in the same spot, but at the negative of the planet velocity, due to the potential of correlated noise interacting with the model spectrum in a similar way. However, no signal is seen. The black ‘+’ represents the best-fit solution to both the system’s velocity as a whole and the planet’s velocity in particular.

While the grid of model atmospheres was successful in finding the planet’s velocity, it did not successfully determine much about the planet’s atmosphere. However, two important conclusions can be gleaned from the study. First, 51 Peg b has an atmosphere with an appreciable amount of water in it (about 1 part in 10,000). Models that included significant (aka, detectable amounts of) carbon dioxide and methane did not result in good fits; only models of water did. This implies that the abundance of carbon dioxide and methane are below the detection threshold. Second, 51 Peg b’s mass is finally conclusively calculated to be 0.476 times the mass of Jupiter (with 7% error bars).

The radial-velocity method has come a long way. In 1995, it was barely able to measure the radial velocity shifts of bright stars. Now it’s being used to measure the radial velocities of their extremely faint planets. This technique is difficult, yet powerful. It allows for the planet’s mass, inclination, and atmospheric composition to be measured. This could be an important tool in the future for extracting information from close-in, potentially habitable worlds orbiting the coolest stars in the Galaxy.