Authors: The Tibet AS Collaboration

One of the big unsolved mysteries in particle astrophysics is the origins and acceleration mechanisms of cosmic rays, or charged particles that are constantly bombarding the Earth. It is impossible to tell which astronomical source is the origin of any one particular cosmic ray. Because cosmic rays are charged particles, they are deflected on their way to Earth by the Galactic magnetic field. Due to this effect, one might expect cosmic rays to arrive isotropically (in equal numbers in every direction), with slight anisotropy because of diffusion effects.  However, that is not what is observed.  Instead, there is a large-scale anisotropy with an energy-dependent amplitude. This causes problems for traditional diffusion models. Studying this anisotropy is important in learning more about cosmic rays.

Today’s bite uses roughly five years of data from the Tibet Air Shower experiment, located at 4300 meters above sea level in Tibet, to provide an update in the study of the cosmic ray anisotropy.  The area of the sky they looked at is slightly larger than in their previous papers, and when combined with data from the IceCube experiment in Antarctica, allows us to have a complete picture of the entire sky in the energy range of a few hundred TeV. 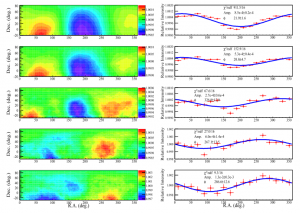 Left: The anisotropy, as seen in 5 different energy bins. From top to bottom, the median energy is 15, 50, 100, 300 and 1000 TeV.  Right: The 1D projection of the plot on the left. The blue curve is the first harmonic fit to the data.  Note how the phase changes with energy.

Maps were binned according to energy and analyzed.  A summary of results can be found below.

So what are the implications of this? Well, for one, studies like these give us some hints as to the origins of cosmic rays.  For example, at a few hundred TeV, the most significant excess is coming from the direction of the Galactic center.  However, the observed energy dependence shows that there is still a lot to learn about how cosmic rays diffuse.  Changes in the anisotropy with energy may imply that the cosmic ray propagation parameters are evolving.

Cosmic rays on the sky – where do they come from?