Title: The Most Massive Heartbeat: An In-depth Analysis of ι Orionis

A heartbeat star is an unusual type of binary or two-star system. The individual stars in these systems are usually fairly large, and thus produce very strong tidal forces, which can shape the stars’ orbit. These tidal forces occur because the gravitational force exerted by one star on the other is not constant across it.  The closer side of the stars are more attracted to each other than the farther sides. In heartbeat stars, these tides are so large that they can actually distort the shape of the star itself. As the two stars in the heartbeat system go through their point of closest passage, or periastron, their shape changes. The stars become more oblate, or somewhat football shaped, as they pass closely to each other, and then revert back to spherical shapes when the distance between them is big enough that the tidal forces subside. Since these dynamic tidal forces distort the shape of the stars, the light we see from the star is affected by this periodic changing shape. When we observe stars, we often keep track of the star’s brightness with respect to time in a light curve.  A heartbeat star’s light curve has a small dip in its light curve when the stars change their shape at periastron; a light curve is shown in the upper section of Figure 1. 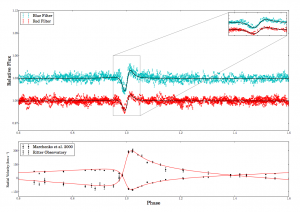 Figure 1: This image shows the light curve of the target in both the blue and red light (top). Below, the radial velocity measurements are shown by the black dots, and the predictions based on the best fit model are shown by the red line.

Most known heartbeat stars were first discovered using the Kepler telescope. This telescope was designed to search for exoplanets in a small patch of the sky, and it obtained four years worth of light curves. Since this data was over such a large  and continuous period of time, several odd celestial objects were serendipitously found through Kepler, including heartbeat stars. However, ι Orionis is unique in that it was not discovered by Kepler. Additionally, one of the stars in this binary system has a very high temperature and is very massive.  Though the stars within heartbeat systems are usually fairly large, ι Orionis is by far the largest heartbeat system yet discovered.  This system is also highly eccentric with an eccentricity of 0.764. The periodic dip in the light curve had previously been noted in this star; however, this paper is the first study of the heartbeat properties of such a massive target.

To better understand this particular system and the dynamic forces that heartbeat stars experience, these authors sought to find the orbits of both the stars in the ι Orionis system. To create this model, they first needed light curve data, which would constrain the period, and spectra, which would constrain the velocity. The authors obtained light curves through a  network of nanosatellites called the BRITE Constellation, which constantly monitor bright stars. They also obtained high-resolution spectra at the Ritter Observatory. The authors also used spectral data that had been previously obtained in their model, so they could further constrain the orbits. 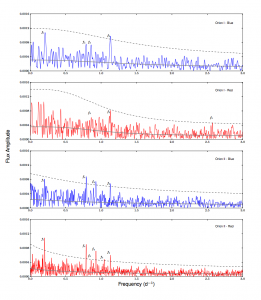 Figure 2: This shows the Fourier transform of the light curves in both red and blue light in the ι Orionis system (labelled Orion I and II). The dashed gray line shows the noise level, so any peak above the dashed line shows a measured frequency.

Using their data, the authors solved for the orbits of the two stars. They created a model for the whole system, which fit their light curve and spectral measurements. The model can be seen in the lower half of Figure 1. From their model, the authors calculated the dissipation of tidal forces within this system– the first time this has been found for a massive and bright star.

These authors also wanted to further explore the tidally induced pulsations of this system so they took a Fourier transform of the light curve, which can be seen in Figure 2. They did this for both stars within the ι Orionis system. Frequencies that have a peak above the noise level were identified as pulsations. These pulsational frequencies agreed with those predicted by the authors’ model.

These stars are windows into the world of extreme tidal interactions, and by continuing to study stars with these types of pulsations, we can learn more about the nature and effect of these forces. By learning more about the HB effects for ι Orionis, we can learn a great deal about massive star and heartbeat star evolution.