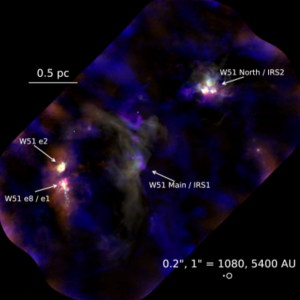 Figure 1. W51 as seen by the radio observatories ALMA and VLA. Images from radio observations are ‘false color’, meaning that the colors represent light that cannot be seen with naked eyes. Color scheme: blue is the carbon monoxide (CO) line, orange is the methanol (CH3OH) line, purple is the cyanoacetylene (HC3N) line, green is the radio continuum, and the white haze is free-free emission of ionized gas. [Figure 1 of original paper.]

Today let’s talk about massive stars! My favorite view of massive stars is the Hubble image of the star cluster R136 in the Large Magellanic Cloud. All the blue shining spots in this picture are massive stars, with masses up to hundreds of solar masses that are million times brighter than the sun! Massive stars bring beauty to our night skies, as well as structures to our Universe. The Hubble image shows massive stars in their magnificent adulthood. But have you ever wondered what they looked like when they were still babies?

Indeed we know very little about their babyhood because baby massive stars are very far away and are usually blocked by opaque dust. To study their births we need observations at longer wavelengths. By looking at infrared (IR) wavelengths, we can study the dust that is heated by newly formed stars, which would provide clues to the embedded stars. By studying radio wave line emission, we can see and trace the dense gas that comes before star formation. Radio free-free continuum shows the compact ionized (HII) regions around young stars. Today’s paper does all these, looking into the high-mass star forming region W51 (shown in Figure 1) using ALMA. ALMA’s extraordinary angular resolution never ceases to amaze me. Today’s observations were done at ~0.2″ resolution, it is equivalent to telling two quarters apart at a distance of ~25 km (about ten standard airport runways placed back-to-back)!

The paper looks at three baby massive stars in W51, namely e2, e8, and North (Figure 1). These objects were chosen because of their strong star formation and the gas clouds have not been destroyed by supernova explosions, which are the key ingredients for understanding high-mass star formation.  While the authors uncovered a wealth of information through their observations in the paper, here we focus on two main aspects: the temperature and ionization structures around the baby massive stars. 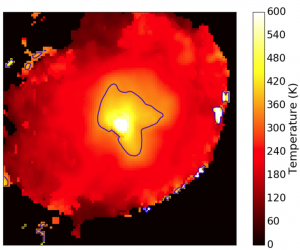 Figure 2. Temperature map around the hot core e2. This map was created using the molecular emission lines of methanol around the source. We see that the baby high-mass star heats up a large volume with a radius about 5000 AU. [Figure 6a of original paper.]

Figure 2 shows the temperature map of the dense gas around the baby massive star e2, created by modeling eight methanol emission lines. The main takeaway is that baby massive stars heat up a large volume of surrounding gas in their early formation phase, preventing gas from fragmenting and keeping the reservoir of gas available for star formation. The contour (blue line) in the temperature map encloses the region above 350 K, encompassing a region with radius ~5000 AU. This temperature is much higher than the ~10 K typically observed in interstellar gas. 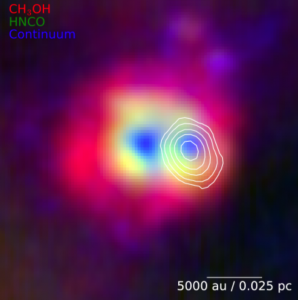 Figure 3. Image showing the highly excited warm molecular gas (colors) and the free-free radio emission from ionized gas (contours) around e2. The legend shows the nature of different colors. The absence of enhanced heating around the ionized region suggests that ionizing radiation has little effect on the dense molecular gas. [Figure 15a of original paper.]

What about the ionization structure? Figure 3 shows the warm molecular gas (colors) and the ionized gas (contours) around e2. Again the bright emission in colors shows that the baby stars are responsible for heating up the nearby dense gas. There are two keys features:

Today’s paper is a pedagogical piece showcasing how bright scientists and next-generation observatories translate into new insights for future observations and simulations. These insights are necessary for us to understand how the beautiful massive cluster R136 came to be. Indeed, we expect the active star formation in the early Universe behaved similarly to within forming massive clusters. Understanding how massive star clusters form therefore provides a unique basis to connect the cosmic history of star formation.

p.s. The first author of today’s paper is also an active developer in astronomy softwares, check out his Github page!