Title: The pristine interior of comet 67P revealed by the combined Aswan outburst and cliff collapse

Amongst all kinds of small bodies in our solar system, comets are undoubtedly the most beautiful, and the most elusive. Hiding the clues to our beginnings in their mesmerizing tails, they silently streak across the dark sky. No doubt that these tiny balls of ice are of great interest to people entrenched in the quest to learn how the solar system came to be.

Comets are our story-tellers.

Comets are scientifically interesting in two ways: 1) Learning about what comets are made of can offer insight into a piece of the formation history of the solar system, namely the composition of the early Solar nebula at the time these things were being created. 2) We know that most comets come from a reservoir called the Oort cloud in the outskirts of the Solar system, 100 thousand times farther away from the Sun than the Earth. Surely, they don’t form that far out. So, by studying why there are objects where there weren’t to begin with, we can try to understand the dynamics of planetary as well as small bodies that transpired in the early Solar nebula.

Even comets have landslides.

Every once in a while, the gravitational influence of our galaxy tosses a cometary body sitting quietly in the Oort cloud for billions of years, into the inner Solar System. These bodies, or “cometary nuclei”, are speculated to have formed ∼4.5 billion years ago in regions of the early Solar nebula where temperatures were low enough for water and other volatile compounds to accrete together with dust as solids. As these nuclei dive in towards the Sun, strong solar illumination induces blasts on the comet’s surface while also causing volatile material to erode. While past studies have out forth a number of possible triggers for these outbursts, the mechanism that drives it remains poorly understood.

In 2014, the ESA Rosetta mission reached Comet 67P and became the first mission to place a probe in orbit around a comet. Using images from this mission, today’s paper by Maurizio Pajola et al. documents a real-time account of a surface outburst activity on Comet 67P, and provides the first definitive evidence for the occurrence of landslides on a comet. 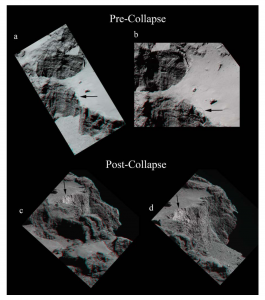 Fig. 1 Pre- and post- collapse pictures depicting change in the volume of the overhanging material that got detached during the landslide. The black arrows show the location of the fracture before the collapse, and the edge of the new cliff after the breakdown.

In the case of Comet 67P, previous research has found that the surface appears very dark and has less than 1% water-ice abundance, posing questions about the relative amounts of dust and ice in the make-up of cometary nuclei, and whether their interiors preserve their formation material or have been thermally altered over time. A hint towards the answer comes from Pajola et al.’s analysis of chronologically separated images taken by Rosetta’s lander in 2015, that display a surface burst activity at the ‘Aswan’ cliff on Comet 67P. By comparing the images taken a few days apart from each other, and noting an increase in the amount of debris at the base of the cliff (Fig 1.), the authors figured that the cliff had undergone an enormous breakdown leaving the subsurface material exposed.

In order to determine the properties of this exposed underlying material, the authors used multi-wavelength images and reported that the subsurface layers appear brighter than the average surface, and are possibly made of the very pristine ice condensed out in the early Solar nebula, in accordance with the expectations. Images taken during Rosetta’s two subsequent annual fly-bys over the cliff revealed a gradual waning of the albedo of the freshly exposed subsurface layers, consistent with the progressive loss of bright volatile species, such as water-ice, suddenly exposed to sunlight.

Is temperature the culprit?

In their work, Pajola et al. demonstrate that the Aswan cliff is special place on Comet 67P owing to a complex interplay of sunlight and shadows produced by the irregular shape of the comet that brings about extremely rapid spatial temperature variations, and speculate its potential role in the occurrence of cliff breakdown on Comet 67P. Through their thermal modeling, Pajola et al. showed temperature variation rates exceeding hundreds of degrees per milli-meter (Fig. 2), establishing strong grounds for this hypothesis. Moreover, the spatial ubiquity of fractures on 67P imaged by the Rosetta mission warrants more investigation into the importance of thermal cracking in the shaping of cometary nuclei in general, as well as the mechanism of crack propagation. Despite a major contribution arising from the thermal gradient, other factors such as terrain morphology, local gravity, presence of other cracks etc. can potentially play a decisive role. Nevertheless, the authors advance the idea that the cumulative effect of surface thermal variations, amplified by the day–night cycle, can produce enormous stresses that can potentially cause fractures, and eventually surface failures. 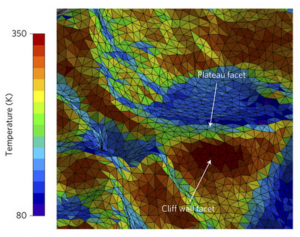 Fig. 2 3D view temperature map at the location of the Aswan cliff wall and the plateau facets.

Today’s paper presents how rapidly the material making up a comet swiftly evolves from its pristine subsurface form to a dark, dehydrated state, showing that a pristine interior could be hidden under an evolved and altered surface of comets such as 67P for billions of years. In addition to shedding light on the processes that shape comets, the results of today’s paper would significantly aid future assessment of the composition as well as morphology of other small bodies, and their ties to the composition and dynamics within the early Solar system.