Title: Orbits for the Impatient: A Bayesian Rejection Sampling Method for Quickly Fitting the Orbits of Long-Period Exoplanets

Discoveries of exoplanets happen quite often these days, so much so that the discovery alone is not enough to satisfy collective scientific curiosity. Discovery with direct imaging, in particular, does not usually reveal much about the planet, other than its existence. However, unlike the transit method and radial velocity measurements, direct imaging allows us to observe exoplanets with very long periods, which is an under-sampled population in the list of currently known exoplanets. Still, this double-edged method of measurement cannot give us full orbital parameters of the planetary system. This population of exoplanets cannot be easily observed by any other method but direct imaging, so the question arises—how can we find the orbital properties of this planetary system with the measurements we have?

The authors of this paper use a new rejection sampling method to quickly find the orbits of these exoplanets, called Orbits for the Impatient (OFTI) . This method generates random orbital fits from astrometric measurements, then scales and rotates the orbits, and then reject orbits too unlikely. A visualization of this process is shown in Figure 1.

Figure 1: This shows a visualization of the OFTI method sampling, scaling and rotating a randomly selected orbit of the fitted exoplanet. In the lowest image, the red lines are the accepted orbits while the gray lines show the rejected orbits.

This method uses astrometric observations and their uncertainties with prior probability density functions to produce posterior probability density functions of generated orbits.  The main process of a rejection sampling method goes like this: the code generates random sets of orbital parameters, calculates a probability for each value, then rejects values with lower probabilities. The rejection process in OFTI is determined by comparing the generated probability to a selected number in (0,1). If the generated probability is greater than the random variable, then the orbit is accepted. This process repeats until any desired numbers of orbits have been selected.

Usually, algorithms such as Metropolis-Hastings MCMC  are used for orbital fitting problems. However, this method takes far less time than an MCMC approach. The OFTI trials are independent, so the fitting and rejection-sampling can be done several times without incurring a bias in fitting. Running OFTI for several successive trials gives an unbiased estimate of the orbit up to 100 times faster than traditional Metropolis-Hasting MCMC fitting.

You may wonder how this method manages to run quickly without compromising the accuracy of its results. The answer to this musing is, of course, clever computational and statistical techniques tricks.  OFTI uses vectorized arrays rather then iterative loops when possible and  is specifically  designed to run multiple  trials in parallel. Since there is an associated error with the astrometric measurements that OFTI uses to generate orbits, it first calculates the minimum  χ 2 value of all orbits tested during an initial run. Then it subtracts the minimum χ 2 value from all other generated  χ 2. This way, orbits with an artificially high χ 2  are not unfairly flat-out rejected. OFTI also confines the inclination and mass based on prior measurements, then uses the maximum, minimum an standard deviation of the array to change the range of values for these parameters, which prevents the generation of obviously unlikely orbits. 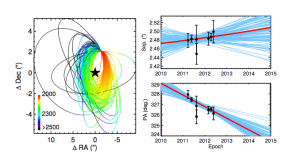 Figure 2: This shows the orbit sampling of the planet GJ 504 b around star GJ 504 A. The 100 most probable orbits are colored accordingly. The right section of the image shows the measurements made of the object in black, and the red line shows the minimum orbit.

In this paper, the authors use this fitting method to find orbital parameters for 10 directly imaged exoplanets and other objects, including brown-dwarfs and low-mass stars. The objects have at least two measured epochs of astrometry each; however in these cases, the orbit has not yet been measured because the measurements only cover a short range of the objects’s orbit, but using OFTI they successfully solved for the orbit of all of the aforementioned sub-stellar objects. The fitting for one of these objects,GJ 504 b, the current coldest imaged exoplanet, is shown in Figure 2.

The most obvious application of this new process is long-period exoplanets, but the authors also solve for the orbits of a variety of other systems, including trinary stars and brown dwarf systems. OFTI is also very useful in planning follow-up observations of targets. This method is incredibly useful to not only planetary scientists but also to all kinds of stellar specialists. Impatient scientists can now use this method to achieve quick and accurate results, which are, quite frankly, the best kind of results.