This is a shocking statistic. I’ve spent a fair bit of time thinking about gender equality in science, and I was still shocked.

And since I’m young and idealistic, I like to believe that we can do something to change those numbers. But how should we go about it? In today’s bite, I’d like to summarise a paper looking at factors that influence women’s interest in physical science careers.

The paper starts by suggesting five factors that have previously been posited as influencing high school women’s interest in physical science careers:

Some of these factors have been previously studied, with results inconclusive. For example, single-sex classes have been shown to have mixed results. A possible cause is that the teacher in a single-sex class needs to actively think about the curriculum and their teaching style for this to be effective. The presence of female role models (either teachers or visitors) is often hypothesised to break stereotypes and encourage participation of women in science. This is a common and easy to deploy tactic – I’ve certainly done my fair share of time speaking to high schoolers about physics – but is it really effective?

Today’s paper use data from a survey of 1,580 female college students who took high school physics. The authors first match individuals across several categories: their prior science/math interest, their grades and the number of years they studied physics in high school. This allows a genuine comparison of how the five factors above impact physics uptake.

Perhaps surprisingly, the first four factors are not shown to be statistically significant. Discussing the work of female scientists has some positive effect, but not to a statistical level. Interestingly, discussion of underrepresentation of women has a significant positive effect. The authors note that the effect is small, since this factor is of course just one of very many influences on each individual’s choice of career. However, this certainly suggests a concrete action that can be taken. 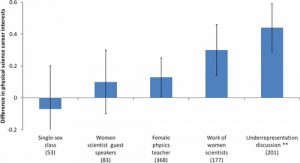 Figure 1 Different in physical science career interests, for each of the factors above. The number in brackets indicates the number of matched individuals compared for each category. Discussion of underrepresentation is the only statistically significant factor. Figure 1 in the paper.

The authors also study individuals exposed to multiple of the factors above – testing, for example, whether single-sex physics classes are only beneficial if taught by a female teacher – but find no detectable combined effect. In other words, no pairs of factors are influential beyond the effect of the individual factors.

One reference in the paper found that students respond well to teachers who are ‘‘energetic, caring, passionate, and patient, with high expectations for student success’’ without ‘‘explicit preference for male or female teachers, attributing positive and negative characteristics to each in ostensibly ‘‘nongendered’’ ways.’’  So, a female teacher who doesn’t build a good relationship with students won’t increase women’s participation in science, and a female guest speaker is unlikely to have the time to build a meaningful relationship with students, and so has less effect.

There’s a really heartening point here: male and female teachers can both encourage women’s participation in science. It’s not just down to women: anyone can make a change! In fact, the paper explicitly notes that some male teachers may feel disheartened and unable to make a difference – but they really can, through “building positive relationships and implementing practices found to be positive, such as the discussion of underrepresentation.”

The authors plan to follow up this work with a more detailed study of how and why these discussion help female students, and as such what exactly the discussions should include and how they can be implemented. One suggestion is that it simply helps students realise that feelings of inadequacy are stemming from external norms, rather than their own inherent capabilities. With studies showing that women in graduate astrophysics are significantly more likely to struggle with imposter syndrome, that certainly rings true – but future work will shed more light on this.

The take home for me is that while I’ll certainly continue to do some of my outreach activities and school visits, I’d like to make more effort to open up conversations about women’s underrepresentation in STEM with both students and teachers, and I’d encourage you to do the same.

Of course, women are far from the only minority group in astrophysics and in physical sciences more generally. I’ve focussed on this particular paper since I thought the result was really interesting, but at astrobites we’re keen to support and encourage universal participation in science, regardless of minoritized status. We plan for future articles to discuss other inequalities.

The unsung contributions of Vera Rubin: her mission in retrospect

Astronomers Beyond Astronomy: Using Your Degree Outside of Academia